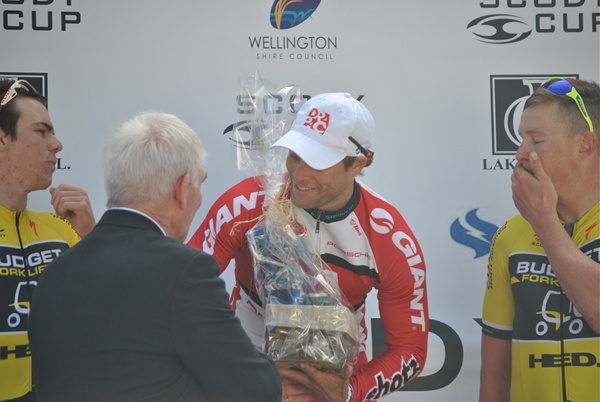 ANTHONY Giacoppo has narrowly retained the leader’s yellow jersey after day three of the Tour of Gippsland.

“We decided we would lead it out from the front and then try and hang on for the win.

While GPM Wilson Racing’s Josh Taylor was the most aggressive rider in the stage, Giacoppo picked up the three remaining jerseys – the criterium, the sprint leader and

“I’ve got a little bit of a collection going at the moment,” Giacoppo said after the stage.

Giacoppo received rock star treatment after the criterium, with Sale 545 Primary School pupils screaming out to get his autograph.

In the afternoon, Jack Beckinsale showed up

his more seasoned competitors, as the Jayco-Honey Shotz rider clinched the 101.9km Maffra to Dargo stage in a nailbiting finish.

“I’ve got two seconds and one third but to get my first stage win, I’m pretty happy,” he said

“Our whole team’s pretty young – the oldest is turning 20 this year.

“We’re racing against guys who we look up to and a few of them have gone overseas for pro races, so

it’s good to race against them.”

Beckinsale, of Sydney, was conscious not to go too hard too early in this afternoon’s twisting stage,

“On the last road stage yesterday, I got dropped on the second climb,” he said.

“I went pretty hard on the first KOM and tried my guts out.

“Today I tried to conserve.”

He did just that and managed to stay in the lead bunch, which caught Darren Lapthorne coming into

Lapthorne had brokeaway by himself with about 30kms to go, building what seemed like a promising

gap which stretched more than 100 metres.

But he was caught on the last climb with four kilometres to go.

“I was feeling pretty good and I know these roads because I’ve trained a lot here before,” he said.

“I gave it a shot but I knew they were getting closer.”

The Drapac Professional Cycling member, who took out the most aggressive rider jersey, hoped he could clinch a stage win in the remaining two days of the tour.

“But we’re probably riding for Will Walker now to try and get him up in the GC,” the former national road champion said, referring to teammate Walker, who finished second in the road race.

Stage seven today is the Bairnsdale criterium starting at 11am before a road race from Lakes Entrance to Metung starting at 2pm.

The tour concludes with a criterium around Paynesville.