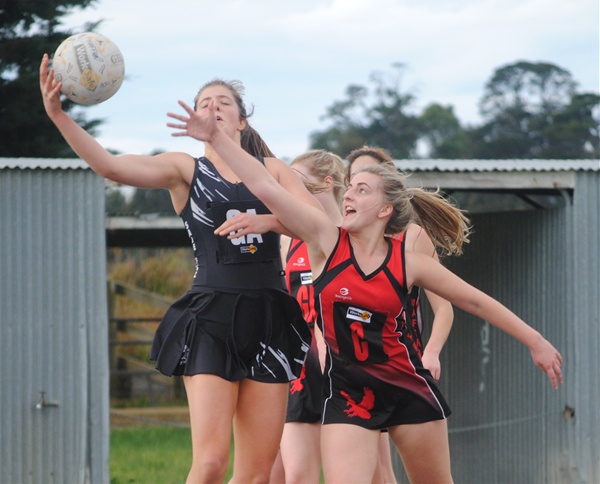 WITH two rounds to play in Gippsland League netball, seven teams are still in the running for spots in the final five.

Sale, Morwell, Wonthaggi and Maffra are fighting for fifth spot.

Maffra fought its way back into the fight with a fighting 32-30 win over Sale in a high standard shoot-out at Maffra on Sunday.

Sale led early after dominating the first term, leading 10-3 at quarter-time then it was all Maffra in the second term with the visitor leading 14-13 at half-time.

The Eagles, with quick movement of the ball and accurate shooting out-scored Sale 11-4 in the third term to lead 24-18 at the final change. Early in the final term the Eagles led by eight before the Magpies made a late charge, scoring 14 goals to eight with the home side winning 32-30.

Once again, the feature match-up for the game was between the Jolly sisters. Emily played well at wing defence for Maffra against sister Sarah, who was Sale’s wing attack.

Everyone at Sale was touched by Maffra’s suggestion the best-on-court medal be introduced and named in honour of Pam Birss, who passed away this year after a battle with cancer.

Caitlyn Morgan, who won the league best-and-fairest award with Maffra last season, filled in for Sale in both A and B grade matches.

In B grade, Sale scored an upset 40-38 win over the fifth-placed Eagles. The match was a real nail-biter with only one or two goals separating the teams at each break.

The C grade match was played along similar lines with both teams having their bursts of free-flowing play and accurate shooting.

The Magpies led 26-25 at the final change and after a shoot-out during the fourth quarter, held on to win 36-34 and end a run of four straight losses.

In the under 17s, second-placed Sale played its best netball for a few weeks to defeat the third-placed Maffra 41-29.

Sale went into the under 15 match in second place against Maffra, who was fourth. The visitors broke away in the second half to win 27-19.

The teams went into the under 13 game in the same ladder positions with Maffra, moving the ball quickly and shooting accurately, leading 10-4 at the first change.

The much-improved Maffra girls were leading 18-15 at half-time before Sale got its teamwork together in a 13-3 third term and went on to win 40-29.