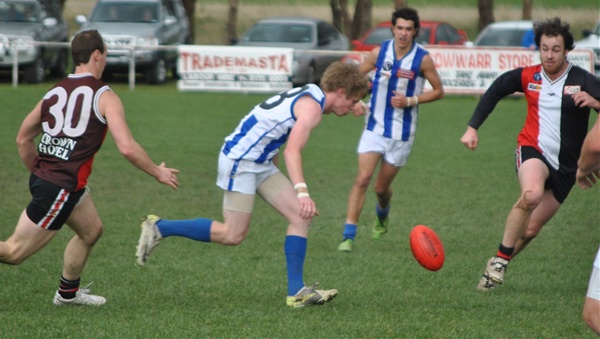 Heavy rain and a hail storm put a dampener on what was expected to be a high standard match.

Heyfield began well, booting the first two goals, before a strong mark to Brad McBride in front of Brent Dinsdale led to the Saints’ scoring.

As hail began to fall it was Cowwarr who found the conditions to its liking, opening the scoring in the second term.

Nick Dowse ran through the middle of the ground, his kick into Wayne Knight resulted in the Kangaroos’ third goal and put the visitors back in front.

Behinds became the order of the day, as both sides struggled to find the goals in the heavy conditions.

With goals at a premium in the third term, McBride goaled from 15 metres out before David Ivey added another for the home side. Matt Cameron split the sticks directly in front to hand the Saints the biggest margin of the match, 15 points, as the Kangaroos struggled to break past the centre square in a goal less quarter.

The Saints defence, led by Kevin Hood, was sublime as it felt the pressure as Heyfield contained the ball within its forward 50.

Heyfield will need to bounce back quickly as it will meet Sale City in the qualifying final on Saturday, while Cowwarr will meet another in-form side, Glengarry, in the elimination final on Sunday.

The Bulldogs struggled to shake the visitor’s early before a strong second quarter set the tone for the remainder of the contest. The two-time reigning premier didn’t look back as it held a commanding lead at each change to eventually win by 65 points.

Damien Ashcroft was well-supported by coach Nick Hider, who ensured the Bulldogs got first touch of the ball in the midfield, while Ben Chivers was instrumental in and around the contests.

For the Bombers, Jesse Sleswick and Cody Brown stood out, while Sky Hammer booted three goals.

The flag favourite slammed on six unanswered majors in the first term to have the Tigers defenders on their knees by quarter-time before six more goals to one in the second term. The Blues kept their foot on the throttle in the second half, booting 19 unanswered goals.

A 12 goal to nil first term set up one of the Cougars’ biggest victories of the season, with Dale Patterson leading the charge, kicking 13 goals.

The Wildcats’ challenge made even more difficult with a number of injures early in the contest leaving the side’s bench decimated.

Churchill’s youngster Christopher Williams was impressive in the midfield, with Patterson and Brendan Holt stand-outs. Brendan Birch and Josh Griffin were the Wildcats’ best.

With King and Barnes in devastating form in front of goal, there was little that the Bombers’ defence could do to stop them.

The victory was the Magpies’ fifth straight.