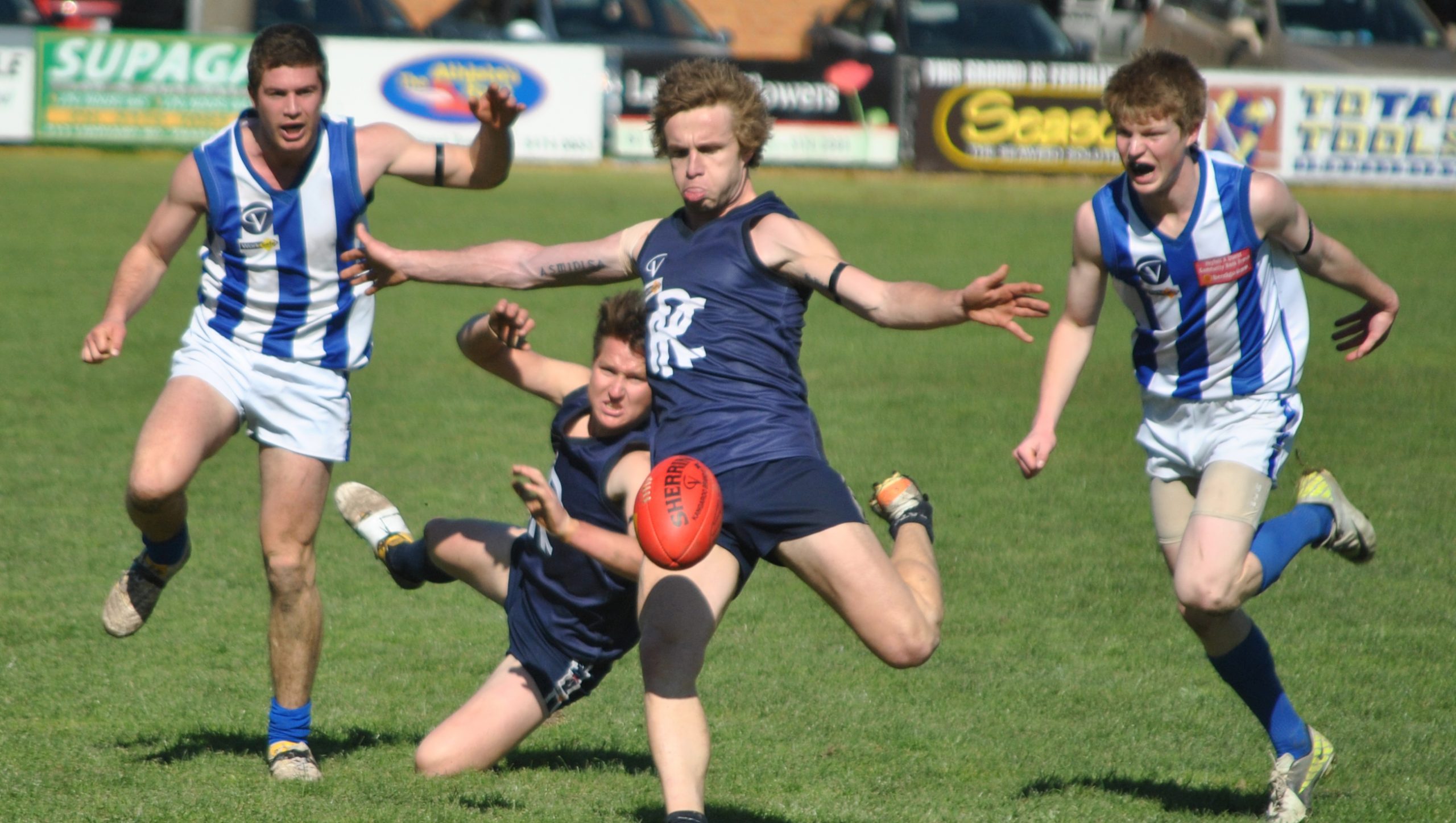 In the second semi-final at Glengarry, Heyfield managed to stay within reach during a dogged first half before Rosedale clicked into gear in the third term, piling on the first three goals to open up a match-winning lead.

Rosedale’s control of the game was ensured by its midfield dominance, amassing disposals and more than doubling the number of times it moved the ball into attack during the third term.

The Blues’ 12-goal to four second half rampage was blistering with the week’s break rejuvenated a side whose second half of the season wasn’t as impressive as its opening nine games.

Rosedale scored the first two goals before some magic by Dom Keating running off half-back saw his shot at goal from outside the 50 metre arc bounce through the big sticks.

The Kangaroos were getting plenty of the ball but struggled to outsmart their more fancied opponent as it took some 10 minutes for them to settle and open the scoring. It was quickly followed by another as some clever vision by Josh Neille spotted an unmanned Shaun Humphreys in the goal square to reel the margin back to nine points.

Rosedale’s Jeremy Reid got the quick response from the centre bounce, for the first of his five goals for the day.

Heyfield’s inaccuracy in goal wasn’t doing it any favours with two shots out of bounds in the first term along with two behinds.

Andrew Flanagan opened his account with the final goal for the term, with midfielders Justin Emery, Chris King and Dale Fleming finding plenty of the ball.

Leading by 20 points at the first change, Ross McDermott quickly extended the lead, weaving around his opponent to score true.

Running off half-back, Heyfield’s Jordon McMillan combined with coach Adrian Cox in the middle of the ground to send the Kangaroos forward with Jesse Leeds swooping on the loose ball to goal. Brett Szabo then got in on the action, adding another goal as Heyfield mounted a challenge.

Cox and Jesse Jackway combined to add yet another for the Kangaroos as they reeled the margin back to within three goals. But as they had done throughout the early stages of the contest, Rosedale responded quickly, first through Emery and then Brad Caldwell.

The Blues took a 23-point lead into the main change with the Kangaroos’ needing to dip deep and start the third term on the front foot. But it was Rosedale which did just that, kicking seven majors to take an unbeatable nine-goal lead into the final change of ends.

Fleming kicked the first goal of the second half followed by Reid’s second.

It took 19 minutes for the Kangaroos to score their first major of the quarter as Rosedale found the goals with ease. Reid added four for the term, with three consecutive majors coming in a two-minute purple patch.

The final term was a formality as the Blues peppered away at the goals, Heyfield registered late goals but was left rueing numerous missed opportunities and poor choices over the course of the afternoon.

Emery came in and out of the game, taking on various roles in a dominating performance and Jordon Aucote was busy, with Rohan Diamond providing run off half-back.

For Heyfield, Humphreys was instrumental in a dominating performance against Jon Cantwell in the ruck, Callan Egan found plenty of the ball, while brothers Brent and Nic Dinsdale were solid performers throughout the contest and never gave up.

SALE City advanced to the reserves grand final after a 36-point win over Heyfield, while Traralgon-Tyers United upset Sale City in the thirds.