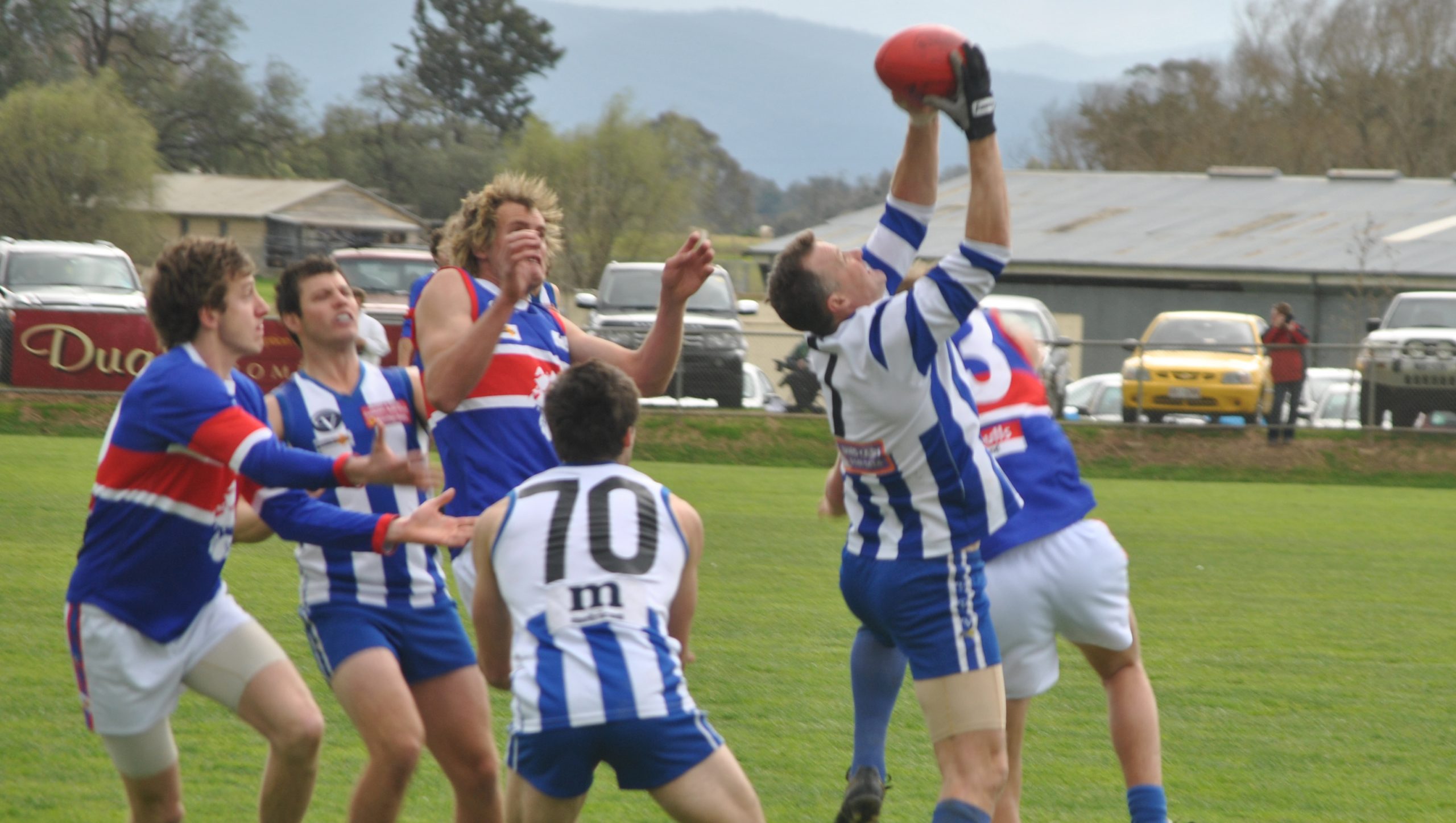 The Bulldogs went into the contest bolstered by the return of premiership players Jake Schuback and Jake Milham, adding fire power to a forward structure coach Nick Hider described as “not balanced or clinical” following their semi-final victory.

Sale City drilled forward from the opening bounce. Following on from a stand-out individual performance last Sunday against Cowwarr, Joel Brayshaw opened the scoring in the first two minutes after Rowan Bell drilled the ball into Brayshaw in the pocket.

Schuback opened his goal account from the edge of the centre square as the reigning premier looked up and about.

City came again before the Kangaroos’ defence slowly moved the ball forward. Dowse fed the ball to Adrian Cox in the goal square before the coach slotted through Heyfield’s first major eight minutes into the contest.

A strong juggling mark in front of goal saw Mitch Dowse boot the first of his three majors for the day to reel the margin back to two points.

The scoring dried up in the windy conditions as errors riddled passages of play.

Schuback broke the tussle adding his second and final goal for the day in the dying stages of the first term to hand the Bulldogs a nine-point break at the first siren.

Long and direct was the order from Cox to his charges during his quarter-time address, and the side did exactly that. Dowse put the Kangaroos in front with Brett Szabo extending the lead further.

City’s defenders struggled to move the ball forward, opting to keep the ball in the dead pocket as the Kangaroos’ forwards forced the turnovers.

Cox made it two in the row as he built on a handy buffer ahead of half-time with the Kangaroos’ kicking into the wind.

Two quick goals after the main change extended Heyfield’s half-time lead. Cox put in one almighty performance on the preliminary final stage to single handily set his side up for a grand final berth.

A free kick to Jesse Jackway following an indiscretion by City defender Michael Walsh set the ball up in the air for the leading pack, with Dowse throwing the ball on the boot to snap at goal from 10 metres out.

Bell worked hard with Hider to lift the Bulldogs, but they could do little to eat away at the margin as the Kangaroos’ kept coming at them. A late goal to Chris Fleming in the third term brought the deficit back to 20 points.

Heyfield held strong in the final 25 minutes to book its first grand final appearance since its 2009 premiership.

The Bulldogs had a number of opportunities to build on the lead in the second term, but it was the Kangaroos’ key play makers which stepped up on the big stage.

Cox made his presence felt early in the contest, his general role in the midfield while pushing forward he found plenty of the ball in front of goal. Josh Neille and Dowse created play on the ball while the sides back line, led by assistant coach Jesse Leeds, withstood the Bulldogs’ forward pressure to ensure the Kangaroos booked a berth in the grand final.

Smarting after being out-classed by Rosedale the week before, the Kangaroos established a three-goal buffer at the main change, one they extended to 20 points at the final change with late goals to Cox and Dowse giving them a 14.15 (99) to 10.4 (64) win.

Creating run from half-back, the Kangaroos’ back six was sublime in setting up play downfield.

For City, Hider had a big game on the back of a stellar two months, Mitch Bennett was damaging with his running through the middle, Marty McDonough was a lone ranger in defence, while Tim McMillan stood-out in the ruck.

IN the reserves, minor premier Heyfield recorded a 16-point victory to advance to the grand final against Sale City.

SALE City’s thirds joined their reserve side in the grand final following their victory over reigning premier Churchill. The Bulldogs will meet Traralgon-Tyers United.