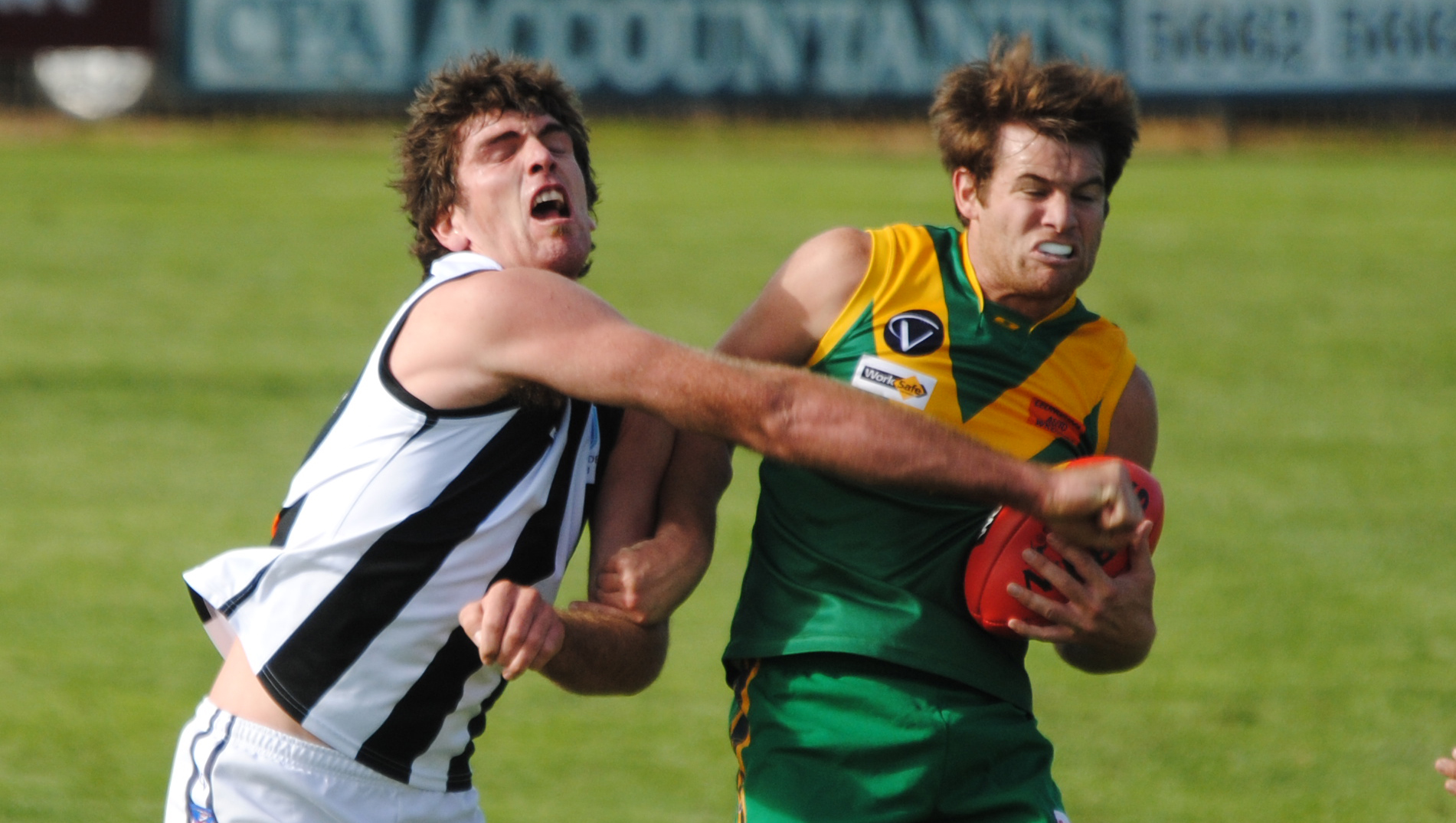 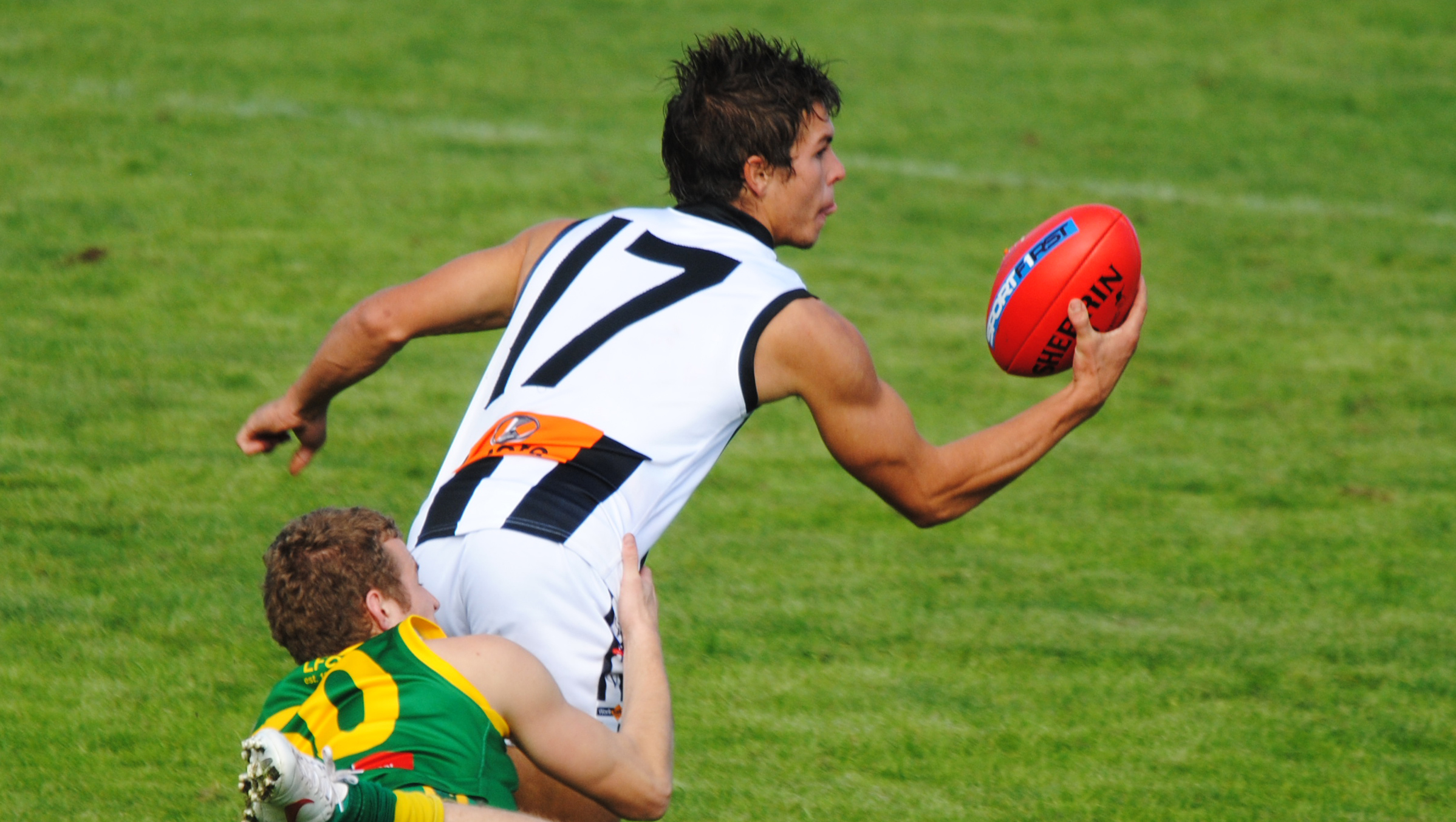 FOLLOWING three quarters of sub-standard football, Sale eventually defeated Leongatha by 59 points in round two of the Gippsland League.

It took a six-goal burst in the final quarter to add some respectability to the Sale scoreboard with the Magpies winning 10.20 (80) to Leongatha 2.9 (21).

Spectators who attended the match of the day expecting to see the home side turn on a high standard performance against the 2012 premier came away disappointed.

Players on both sides had difficulty in handling the ball in blustery conditions and irregular bounce on the spongy surface.

Players continually fumbled, dropped marks, and disposed of the ball poorly. Many were cramping by three-quarter-time.

Having 10 players missing from last year’s preliminary final side, the Parrots were well undermanned and only poor kicking by the Magpies kept the Parrots in the game until three-quarter-time.

Only four goals from 15 scoring shots were registered by both sides in the first half.

Despite clearly having more possession of the ball, Sale wasted many opportunities and went in at half-time leading by only 17 points.

The Magpies gradually pushed their lead out to 26 points at the final break when coach Matt Ferguson obviously unhappy with his side’s performance, insisted on them playing percentage football. At this point the wind suddenly dropped and the standard of play improved as the Magpies responded by playing more directly and peppered the goals with 13 scoring shots to the Parrots’ five for the quarter.

As usual, midfielders Kane Martin and Luke Collins provided drive into the forward line, and the experienced Chris Laverty, Jake Schuback, and Kane Fraser with three goals made useful contributions. Ferguson was off target in the windy conditions, kicking only one goal from six scoring shots.

The Parrots had very few winners with Cade Maskell trying his best up forward but he was also off target with one goal from five attempts. Pat McGrath, Zak Vernon and Dylan Westaway were the best of the others for Leongatha.

Little separated the sides all afternoon with the Power leading by three points at quarter-time, the home side leading by one at half-time before the visitor lead by six at the final change.

Byron Dryden was strong in the Power defence, while ruckman Earl Shaw and Lucas White had the better of play in the centre.

TEN goals to four in the second half helped Drouin turn a 17-point half-time deficit into a 22-point win.

Moe made a strong start with Declan Keilty kicking four first quarter goals to give the Lions a 23-point lead at the first change.

Although not helped by inaccurate kicking for goal, the Hawks cut the margin to three points before booting six goals to two in the final term to win 17.19 (121) to 15.9 (99).

James Blaser put in another prominent performance for Moe, kicking five goals while also playing in the midfield. Keilty finished the match with six goals.

Trailing at the long break, the Tigers then booted 12 goals to five to win by 42 points.

Relishing his return to being first choice ruckman, Matt Gray was the Gulls’ best.