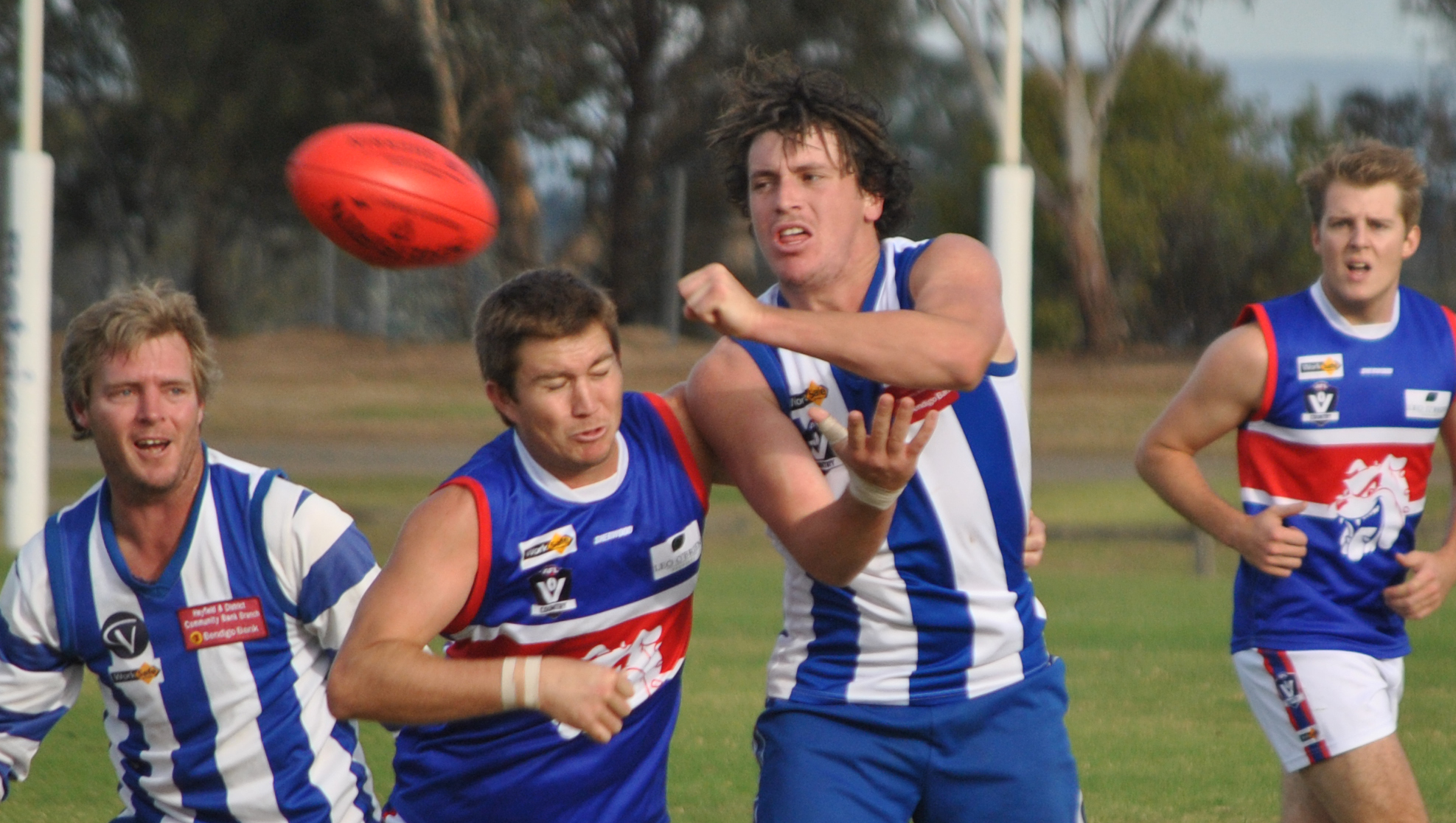 HEYFIELD made an early statement of intent with an emphatic 50-point victory over Sale City.

After a tight start to the match, the Kangaroos opened up a 28-point lead at half-time with a five-goal second quarter with Lyell Berry and Jesse Bedggood in blistering touch in front of goal.

The visitors kept within reach in the third term, but could do little to eat into the Kangaroos’ lead, which they continued to build on in the second half.

For the Bulldogs, Matt Lutze had one of his best matches this season, Byron Shingles was also impressive, while Mitch Evans and Nick Grainger booted four goals each.

WOODSIDE enhanced its status as the competition’s big improver, with a 30-point triumph at home over league heavyweight Churchill.

The eagerly anticipated clash between the undefeated top of the table sides lived up to all expectations in the first half.

Five points favoured the Cougars after a high-scoring first quarter before the visitors used the conditions to their favour in the second term, skipping away to a 20-point lead after kicking seven goals to three.

Coach Tim Darby, Travis Brighton and Hamish Towns made an impact in front of goal during the second quarter.

The Wildcats blitzed their opponents during the third term, outscoring Churchill six goals to three to reel the half-time margin back to one point at the final change.

In the final term, the Wildcats remained hungry, passionate and wanting the win.

Through key forward Justin Staley, the Wildcats hit their straps early in the quarter. The Churchill defence worked diligently to contain Staley, as the midfield dominance and delivery into the forward line put the home side in the box seat.

Staley kicked 11 goals against a formidable backline, Hank Norman chipped in with two majors in a dominant performance, while Matt Scholz also held his own in a strong individual effort.

Blues get out of gaol

ROSEDALE got out of gaol to record its third win of the season.

After taking the lead 10 minutes into the final term, Gormandale appeared poised to register its first win of the season, but the Blues regained the lead and went on to win 9.14 (68) to 9.8 (62).

Tigers coach Luke Henderson said his side could take plenty from the contest despite falling short of the line.

“We have seen in the opening month that we have the ability to beat everyone at the competition, but we also know that we are at a level that we can also lose to anyone,” he said.

“We know that we have to play at our absolute best; we have pulled together patches and glimpses of this.

“We had plenty of the ball in the last quarter against Rosedale, we hit the front 10 minutes into the final term, however they replied with a goal straight from the centre to regain the lead.”

Henderson said the Tigers’ season would be on the line this Sunday then the side travels to Glengarry.

The Bombers could do little but watch in awe as the Saints rebounded from the disappointment of the opening month to put the result well beyond question during the first term.

The Saints took the foot off the pedal as the Bombers asserted themselves in the contest, outscoring the home side in the second term.

Milestone man Cooper was impressive in the midfield and recruit Jordon Sandy again impressed, with Brendan Patrick-Smith also among the best.

Adam Helmke was the Bombers’ best.

TRARALGON-Tyers United was forced to work hard for the four points against a persistent Glengarry.

The Bombers were pushed in a tough physical contest at Tyers.

Glengarry skipped out to a 10-point lead at the first change before the Bombers fought back in the second term with a Brian Graham goal giving them a one-goal lead at the long change.

The Magpies led by two points after a tight third term. Defender Lachlan Little had a major impact on proceedings, with Trevor May and Robbie Cahill popping up to score majors.

The Bombers got the better of the visitors early in the fourth term, racing out to a 25-point before the Magpies booted two majors during the final 30 seconds.