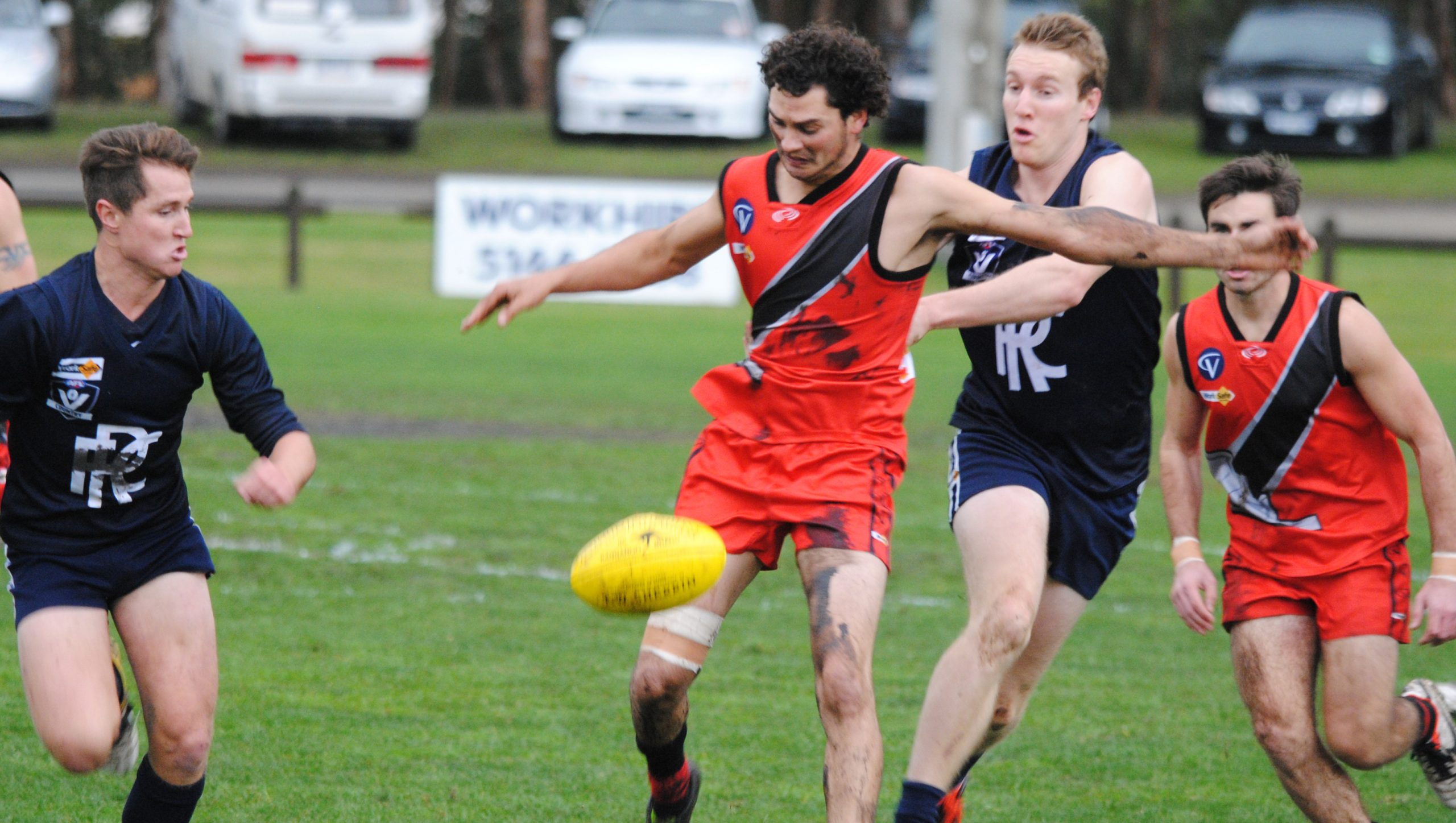 A BARNSTORMING Rosedale booted eight goals to two in the first quarter to shake off any talk about the end of its North Gippsland football finals ambitions.

Coming off a surprise defeat at Glengarry to host Boisdale-Briagolong, the Blues boasted plenty of firepower in front of goal with Nic Rutter, Andrew Flannigan and Chris Graham, who returned to the line-up after injury.

The Blues burst out of the block quickly flattening any challenge from Boisdale-Briagolong.

HEYFIELD defeated Gormandale 12.19 (91) to 7.7 (49), but inaccurate kicking for goal prevented the ladder leader from winning by more.

It was far from one-way traffic throughout the contest, however as they have frequently done throughout the season, the Tigers failed to score a major in the second term as the Kangaroos established a handy 34-point half-time buffer.

In cold damp conditions, the Kangaroos did enough to build on their lead and register their seventh straight victory although it was far from a convincing one.

Heyfield’s Jesse Bedggood was the pick of the goal kickers, finishing the contest with four, while Jack Woodland continued his devastating form.

Daniel Domaille was among the Tigers’ best.

Saints on a roll

After failing to win its first four matches, the Saints have won four of their past five to march up to sixth position on the ladder.

The Saints proved too slick for the second-placed Bombers, laying the foundation for its eight-goal win with a 10-goal to five first half before the floodgates opened.

The Saints took an 18-point lead into the first break before the Bombers regrouped as they worked hard to match the visitors before the main change.

The Saints were never headed after the break as the contest was all but over by three-quarter-time with Cowwarr, led by best-on-ground Jordon Bourke in the midfield, Brett Street and goal sneak Robbie Ferguson, having doubled the home sides score.

Tim Johnston finished the match with four majors to take his season tally to 39, seven ahead of the competition’s next best, Justin Staley. Ferguson chipped in with three with Ben Plozza and coach Luke Cooper two each.

For the Bombers, Tyler Mustoe booted five goals, while midfielder Hayden Hector worked hard to set up opportunities for his side.

Two in a row

GLENGARRY notched consecutive wins for the first time since round 14 last year season with a 13-goal drubbing of fourth-placed Woodside.

The Wildcats had little answer to the Blues’ structure, with Josh King and Matt Royal leading the charge on the scoreboard with five goals each, Matt Royal five and Ross McDermott four.

There was plenty to like about the Magpies’ performance, Royal was explosive and dangerous in front of goal, McDermott was also impressive, while John Northey and Jason Ford were stand-outs in a strong team effort.

CHURCHILL led from the outset as victory on Sunday against Sale City never appeared in doubt.

Led by Joey Whykes in a stellar best-on-ground performance, kicking eight goals, the Cougars were sublime in making an early statement of intent.

Boasting winners around the ground, a number of the Cougars key players continued their solid form of the past month. Forward Brendan Holt provided headaches for defender Tim Dimarco, who worked hard but had little answer to his opponent’s run, leap in the air and ease in front of goal which saw him boot seven goals.

Travis Brighton taunted his many opponents, Billy Wight continues to evolve and Chris Williams set-up a number of goals.

Nathan Osborne got the Cougars on the board in the opening minutes of the contest, swooping on the loose ball following a free kick to teammate Chris Burke to slam home the major.

A Brad Knowles kick hit the chest of Holt who opened up his account.

Marty McDonough broke through to register City’s opening major, following second efforts by Mitch Evans and Mitch Bennett. It was followed by four straight by the Cougars before Whykes added another for the term from the pocket and Burke guided through his first ahead of the quarter-time siren.

City’s Nick Grainger stabbed at goal before the Cougars answered with another goal from a centre bounce.

It was a more competitive Bulldogs line-up in the second term, putting the brakes on the Cougars’ scoring opportunities as they worked the ball past centre half-back to spend more time in their forward 50, however it was to little avail as the visitors could only manage 1.8 for the term.

A snap shot at goal from outside 30 metres by Whykes was the highlight of the second term as the Cougars skipped away to a 66-point lead.

The third term ensured the Cougars made it a miserable day for the visitors as they kicked 10 more goals to fly out to a 113-point lead.

The Whykes and Holt highlight show continued in the final term as the Bulldogs could do little but watch the performance.