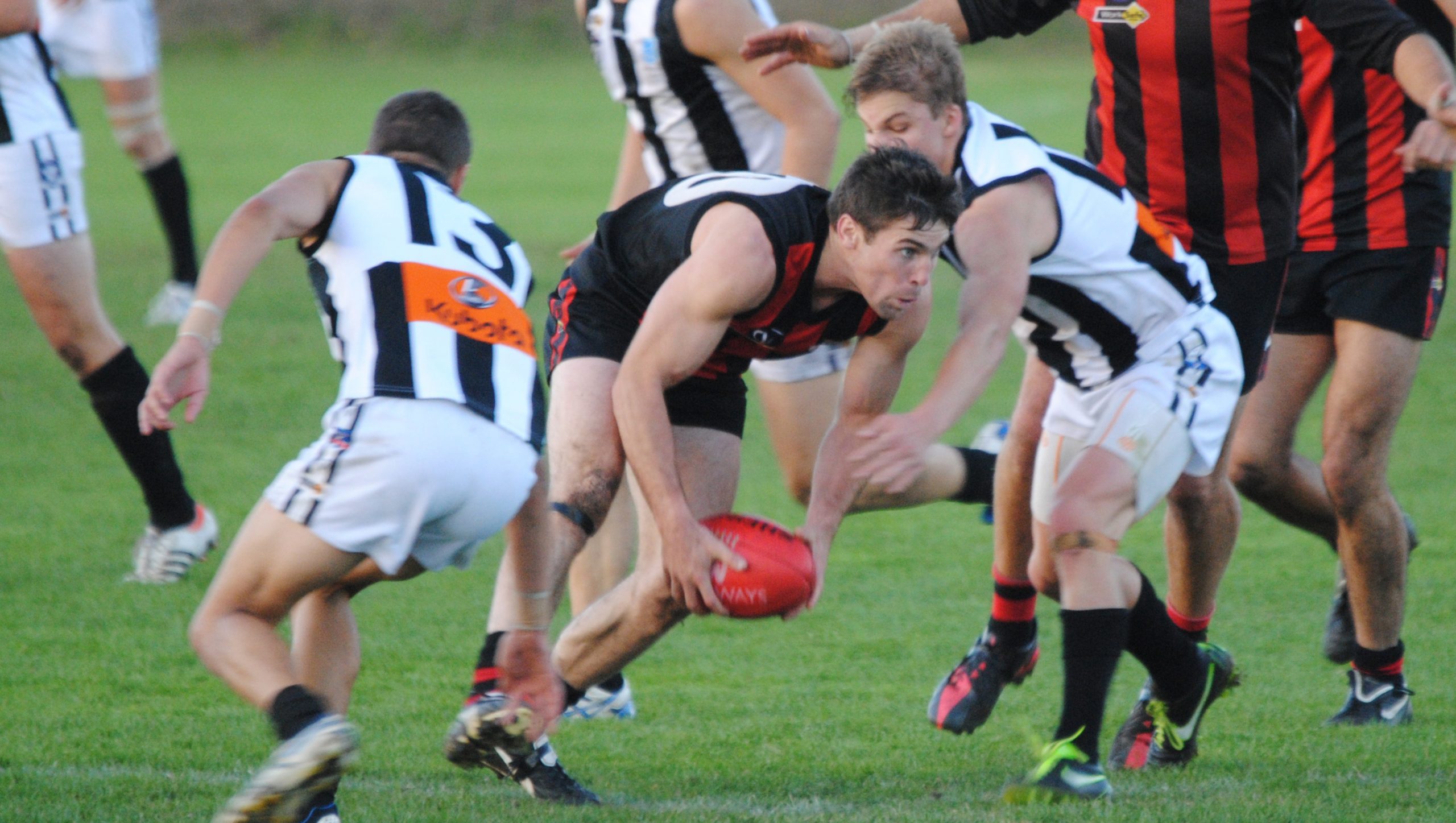 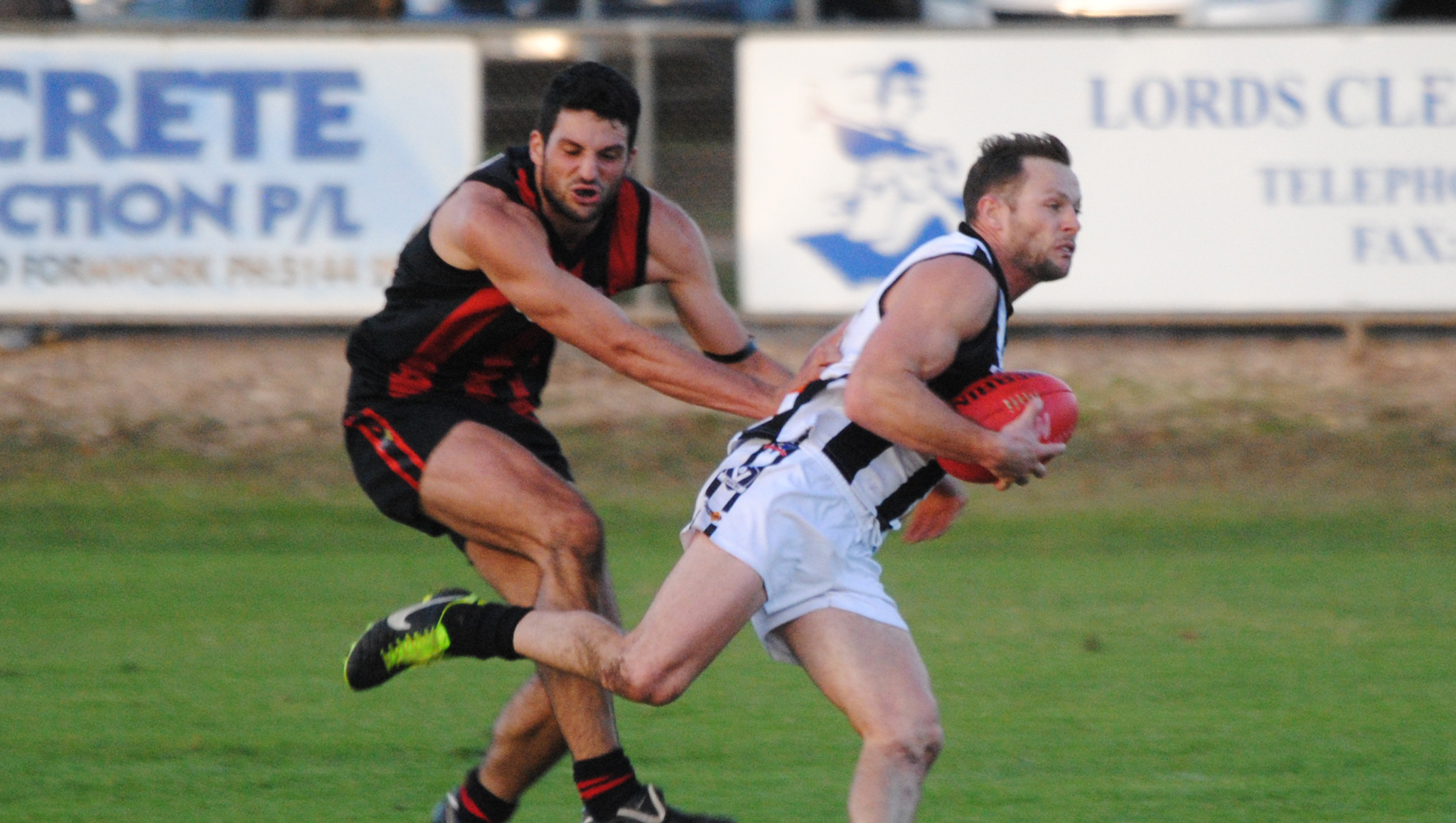 For the Eagles it was a hard fought and stirring victory over their fiercest of rivals, but for the Magpies, it was a missed opportunity, considering they could have taken the match away from the home side in the first quarter.

Both sides welcomed back their respective coaches, Hayden Burgiel for Maffra and Matt Ferguson for Sale, after injury.

The Magpies were also boosted by the return of Kane Martin, but had Jake Schuback and Justin McLay unavailable.

Sale dominated the first term with its defenders and midfielders winning ball after applying pressure on to the Eagles.

The home side found it difficult to move the ball out of defence, many times finding the ball being kicked straight into their back line after failing to hit targets up the ground.

Despite dominating play, the Magpies would only muster two goals from 10 scoring shots, taking a 14-point lead into quarter-time.

It looked like the play would continue to favour Sale in the second quarter when Mitch Davis kicked the first of his four goals for the day, but goals from Darren Sheen, Hayden Burgiel, Daniel Bedggood and Josh Davis gave the Eagles a four-point lead heading into time-on.

The Eagles were running more with the ball and punished mistakes by the usually reliable Sale defence during the second term. The Eagles kicked five goals to two to take a three-point lead into half-time.

Maffra again had the better of play in the third term, but early behinds threatened to hamper it. The Eagles did recover, kicking four goals to three to lead by 15 points at the final change.

With a win against their rivals still within reach, the Magpies lifted in the final term. Successive goals from Kane Fraser, Davis and Brendan Rathnow got the visitors to within seven points midway through the quarter.

The Eagles responded to the challenge with a Ryan Foat snap for goal after Sale failed to deal with the ball in defence.

Another Mitch Davis goal kept the Magpies in the contest but they were unable to quickly follow that up with another major as the Eagles’ defence held strong .

Bedggood sealed the win with a goal.

Fraser finished the match with his third goal, but it was too late for the Magpies.

Defender Lachie Tood was the Magpies’ best, with Jack Lipman doing well in the ruck, feeding the ball to Martin and Josh Dunkley. Justin Mitrevski used the ball well.

Sale won the reserves match by 29 points, but only after the Eagles got to within a goal during the final term.

MORWELL withheld a final term fightback to win at Leongatha.

The Maroons kicked seven unanswered goals in the first term and never looked back.

Dan McKenna kicked six goals, while Michael Geary and Tim Northe were prominent on the ball. Jordan Wyatt was the Hawks’ best.

Troy Harley and Tim Gilliland led the way for the Power, while Stephen Henshaw and David Waddell kept the Redlegs in the contest.

MOE almost registered its first win of the season, going down at home by two points.

The Lions trailed at each break and could have snatch victory if not for some inaccurate kicking for goal in the final term. The Gulls won 7.10 (52) to 6.14 (50).