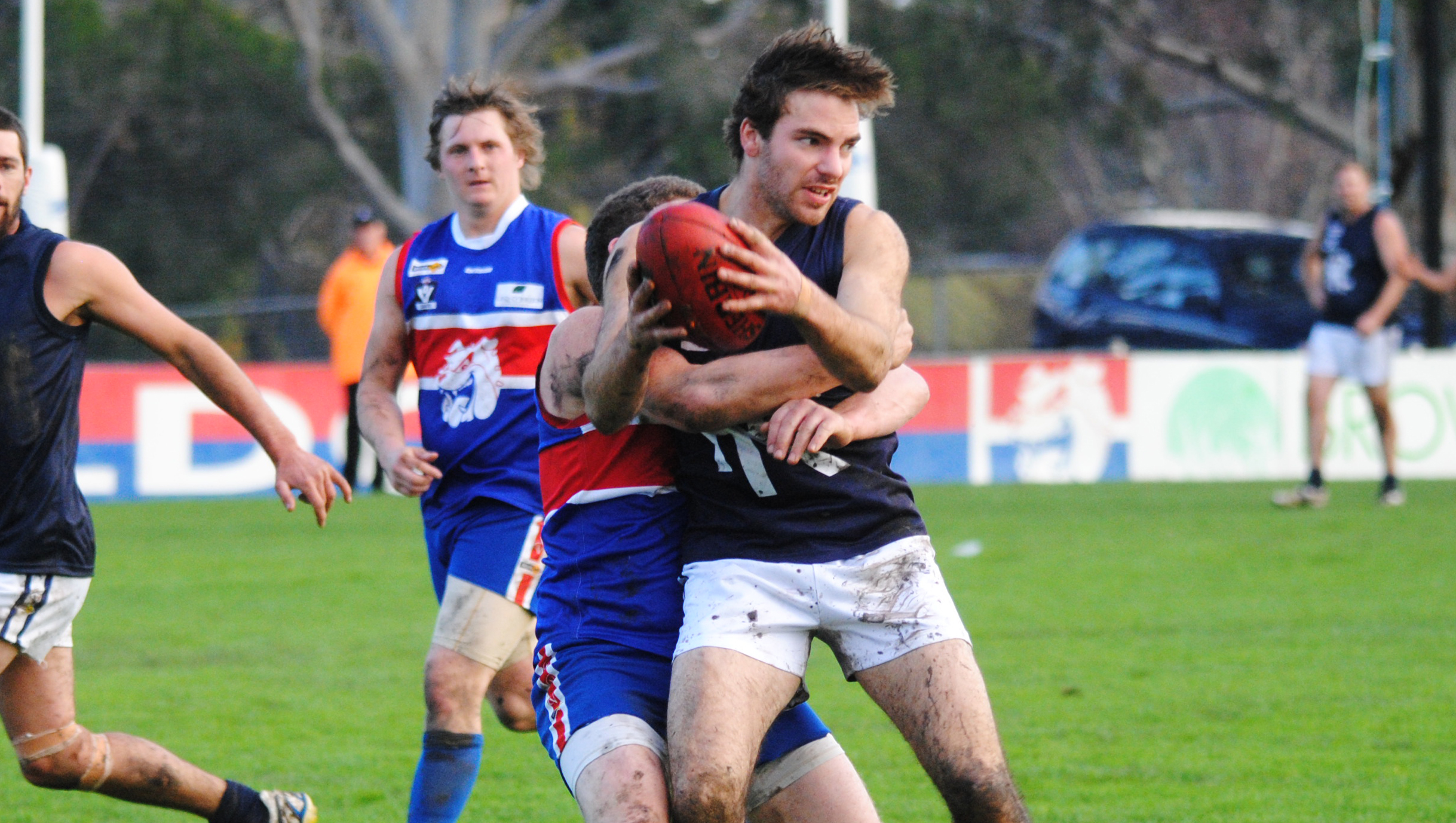 There was a question mark over whether the match would take place, with the Sale City committee meeting ahead of play Saturday morning concerned about the condition of the ground following the late week’s deluge which saw the parts of Stephenson Park resemble a lake.

The young pups weren’t put off by the soggy conditions, taking to them like ducks to water.

It was all one-way traffic early as the visitors made the most of their opportunities in front of goal to establish a four-goal buffer at the first change.

The Bulldogs didn’t drop their guard, mounting a second term challenge to reel the margin back to seven points against their highly-fancied opponents.

They didn’t let up in the third term with Mitch Bennett and Nic Grainger leading the charge on the scoreboard and coach Joel Brayshaw helping the side take a five-point lead at the final change.

The Bulldogs went neck-and-neck with the Blues as they worked hard to hold their lead, but they couldn’t halt Rosedale’s late quarter goals which resulted in a 13.8 (86) to11.10 (76) victory.

HEYFIELD’s eighth win of the season has seen the Kangaroos sit two games clear of their nearest rival and next week’s opponent Rosedale.

It was far from one-way traffic against Churchill, with the Cougars testing the resolve of the competition’s top side on more than one occasion.

In a tight battle, Heyfield looked the goods early, leading by two goals at the first change. Churchill dug deep to turn the deficit into a 13-point lead at half-time with, led by coach Tim Darby and goal sneak Joey Whykes, a five-goal to one quarter.

The goals dried up for Churchill during the third term, as Kodie Woodland and Jesse Bedggood got their hands on the ball in front of goal to regain the lead for Heyfield.

The sides went goal-for-goal on the scoreboard with the clock counting down on the Cougars’ challenge with the Kangaroos winning 12.16 (88) to 11.5 (71).

Heyfield’s Matt Bedggood was best-on-ground, Tom McMillan played one of his best matches for the season, while Jack Woodland and Dave Kelly continued their solid form.

For the visitors, Chris Burke and Travis Brighton led from the front all day with Whykes again causing headaches for opposition defenders, finishing the match with five majors.

WOODSIDE gradually built on the ascendancy it gained during the first term to comfortably defeat Traralgon-Tyers United by 56 points, 13.13 (91) to 5.5 (35).

Unveiling their new recruit, but a familiar face in the Bombers’ strip, Tim Aitken, TTU would have been confident the added ammunition in front of goal would have served it well. But it was the home side who, led by best-on-ground Justin Staley, stole the show early.

The Wildcats skipped away to a 14-point quarter-time lead with Rob Michaelides amassing early possessions and standing tall in front of goal.

The home side relished in the conditions, booting four goals to two ahead of half-time.

The Wildcats weren’t troubled in the second half, with TTU managing just the 2.1 in each term as they watched the home side secure their sixth win, while the visitor slid down the ladder to fourth position.

COWWARR and Gormandale fought out the first draw of the season.

Leading for the majority of the contest, the tables turned on the giant killers of the past month Cowwarr with the Saints trailing by eight points at three-quarter-time.

Holding the Tigers goalless in the final term wasn’t enough as they struggled to enter the forward line and mount their challenge for a third straight victory.

The sixth-placed Saints were well held late by a fearless Tiger outfit which weren’t daunted by its opposition.

The result has left the Saints two points outside the top five ahead of a big game against fifth-placed Churchill this Saturday.