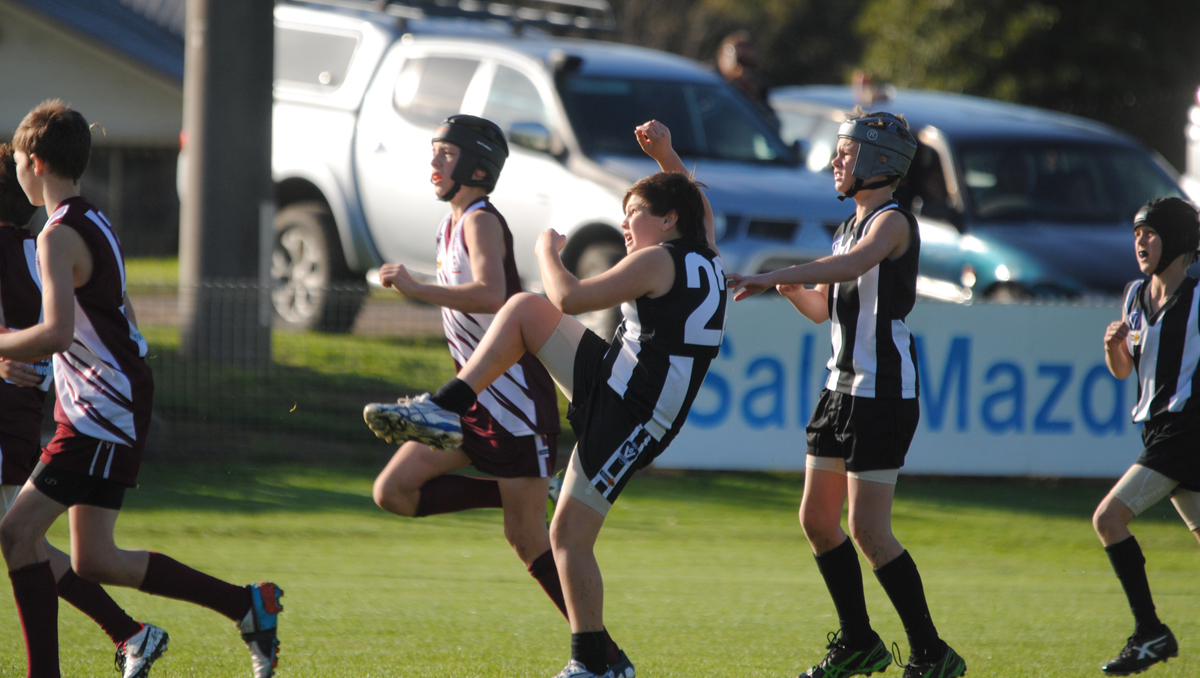 SALE and District Junior Football Association under 12 and under 16 sides will play off in the Gippsland Junior Football Interleague championship at Sale oval on Sunday.

The S&DJFA under 14 side put in a competitive effort to finish third.

S&DJFA will play off against Central Gippsland, the only team to inflict a loss on the home Association during the home and away rounds, in the under 12s while S&DJFA will meet Traralgon in the under 16 decider.

While S&DJFA accounted for Traralgon in the home and away rounds, Traralgon boast a slightly better percentage and Sundays final promises to be a tough contest.With just three teams competing in the under 16 interleague competition this year, Bairnsdale played no further part in the tournament after suffering losses to both S&DJFA and Traralgon on Tuesday.

Tom Anderson kicked two goals to be among the better players, while Howard, Reid, Telford and Sundermann continued their good form. Bailey Escreet put in a best-on-ground effort.

S&DJFA will meet in the under 16 decider from 11.35am at Sale Oval on Sunday.

S&DJFA will enter the under 12 decider as underdogs after suffering a loss to its opponents, Central Gippsland, during the home and away rounds.

The home team began their campaign with a big win over Traralgon at Sale Oval, 9.2 (56) to 0.1 (1).Charlie Comben kicked four goals in a best on ground performance, while  Brodie Adams and Louis Jones kicked two goals each.

Will Mayne gave his midfielders good supply in the ruck, with the likes of Luke Williams, Sam Berry and Joseph Ziino taking full advantage.

The under 12s pulled off the great escape over an inaccurate Alberton at College, coming away with a 10 point win.

Dylan Robins, Bailey Nicholas and Riley Boyle were also among the better players.Central Gippsland were too strong for SDJFA at Stephenson Park, 7.3 (45) to 0.2 (2).

Ziino, Williams, Robins, Mayne, Berry and Michael Jones were instrumental in pulling of a thrilling three point win over Bairnsdale, 4.3 (27) to 4.0 (24).

After a competitive first quarter, SDJFA pulled away to record a comfortable victory over Warragul.

Whitford kicked two goals, while Comben and Williams provided good drive from the midfield.Smyth, Ziino, Boyle and Robins were the other better players.

S&DJFA will meet Central Gippsland in the under 12 decider from 10am at Sale Oval on Sunday.

S&DJFA just missed out on booking a place in the under 14 decider, finishing third.

He was well supported by Will Stephenson, Lachlan Craft, Cody Henness, Ryan Thatcher and Ambrose McCall.

Effectively playing for a spot against Central Gippsland in the decider, the home team went down to Bairnsdale at College by just three points.

McCall kicked two goals, while Stephenson, Craft, McLindin, Jackson, Shelton and McLaren were the better players.Central Gippsland will meet Bairnsdale in the final from 1.30pm at Sale Oval on Sunday.