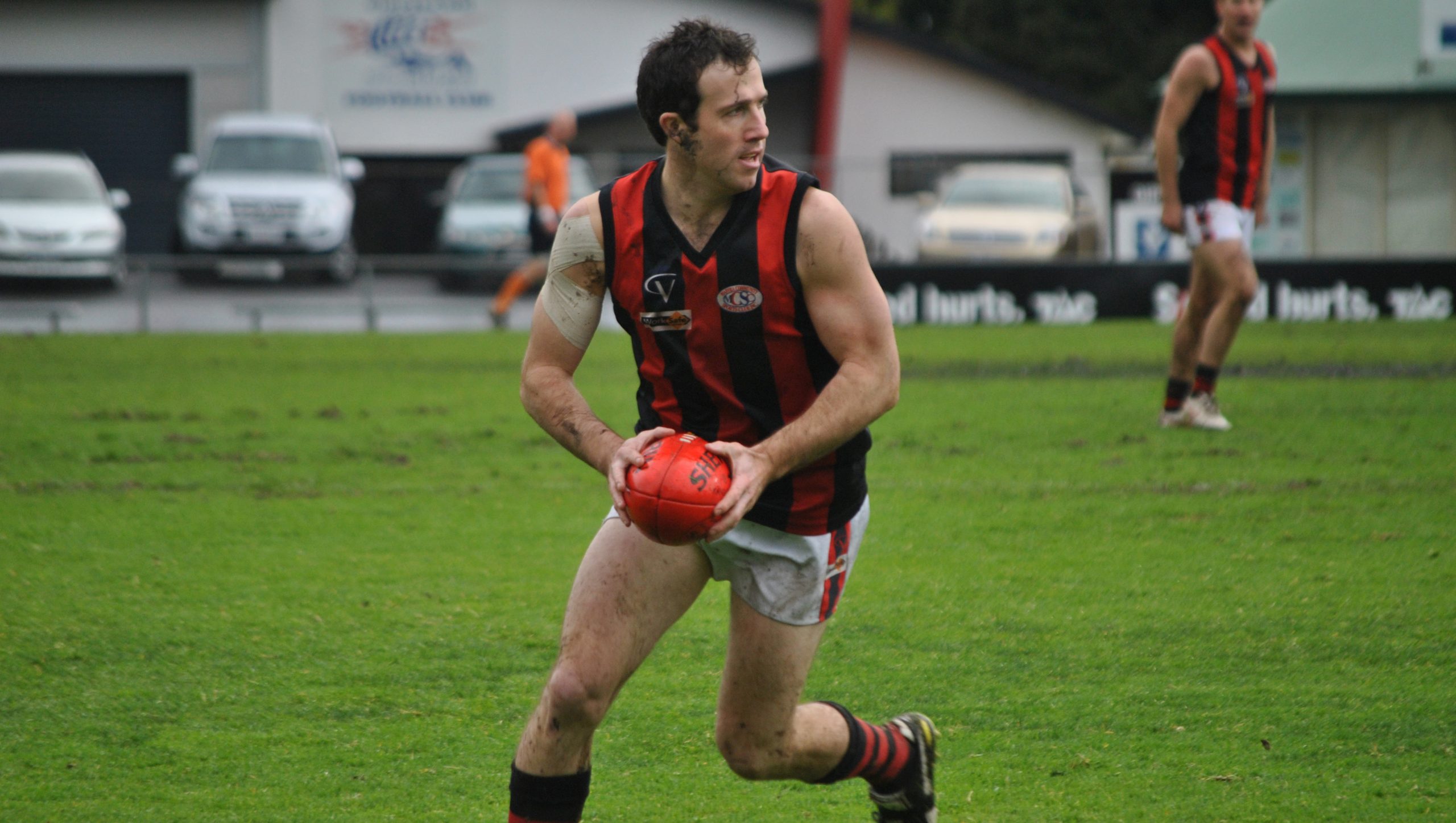 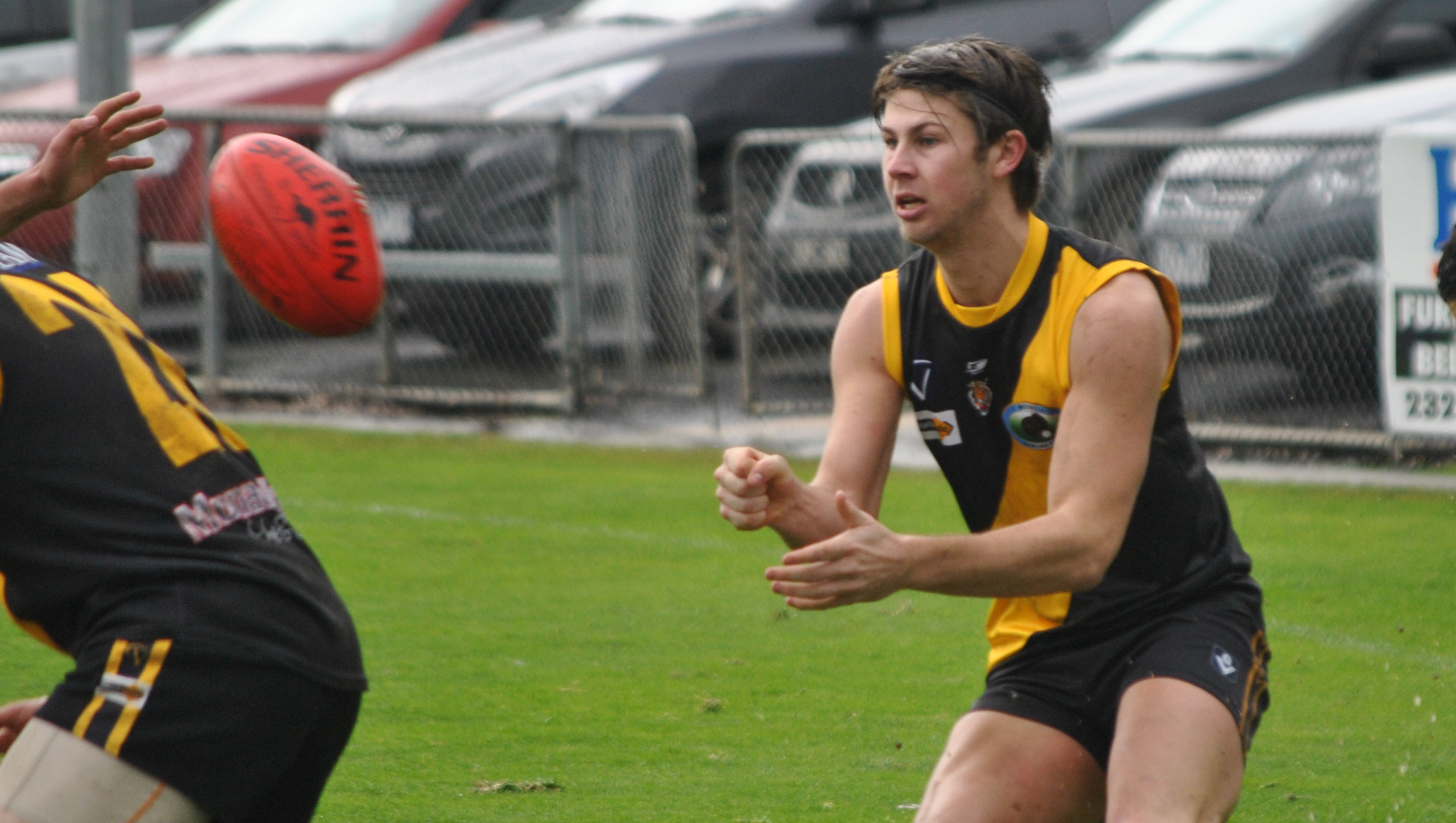 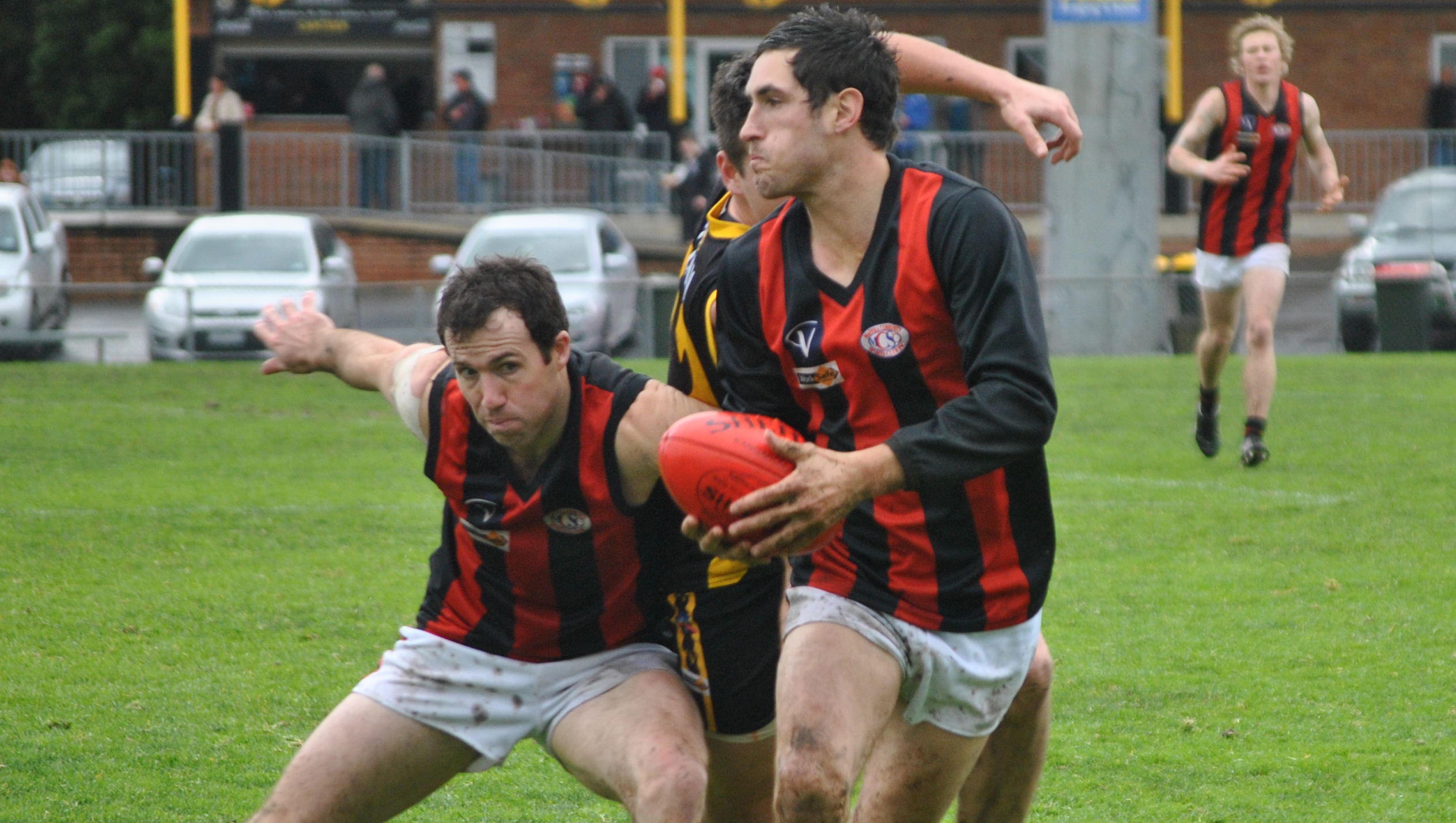 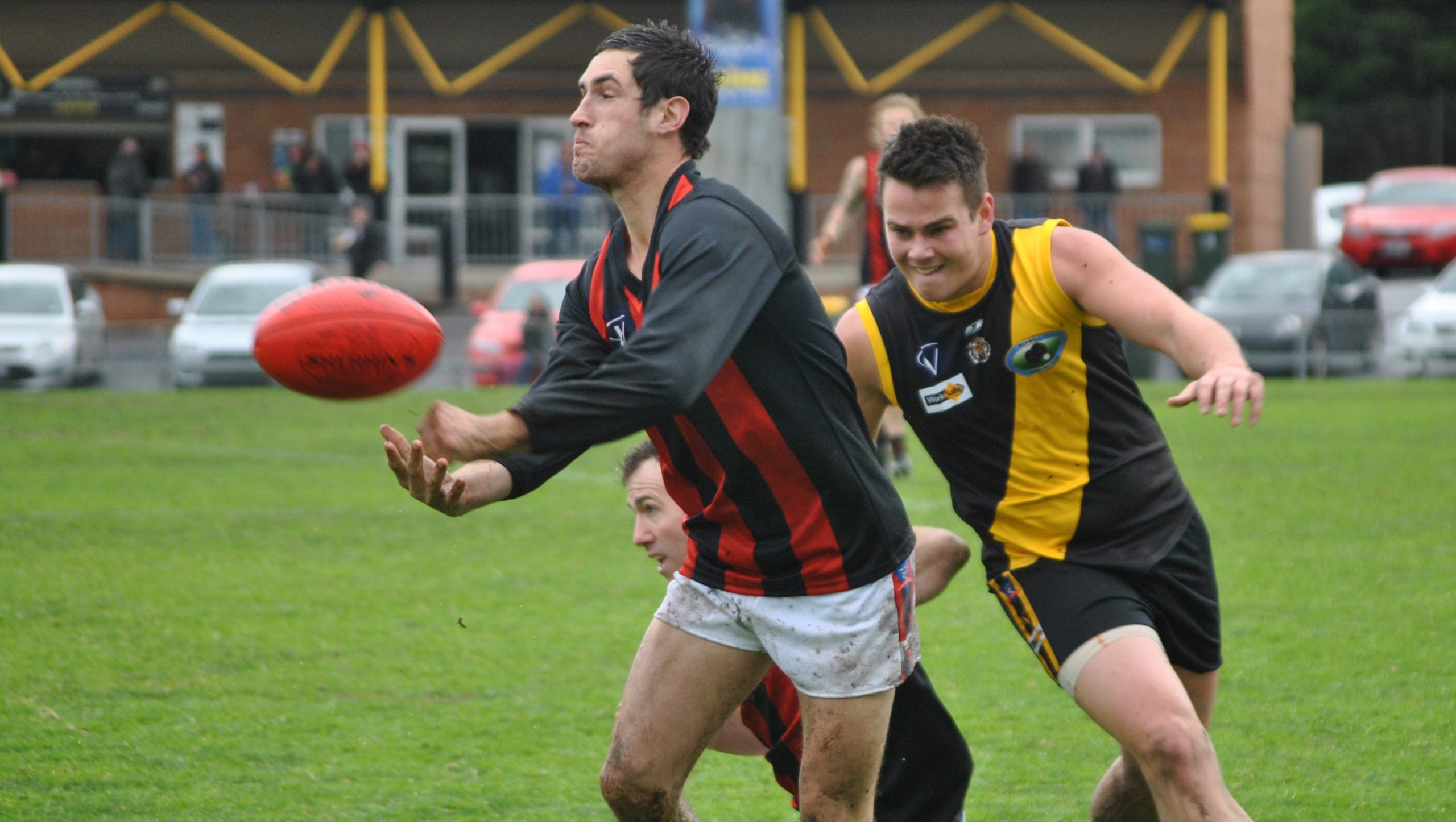 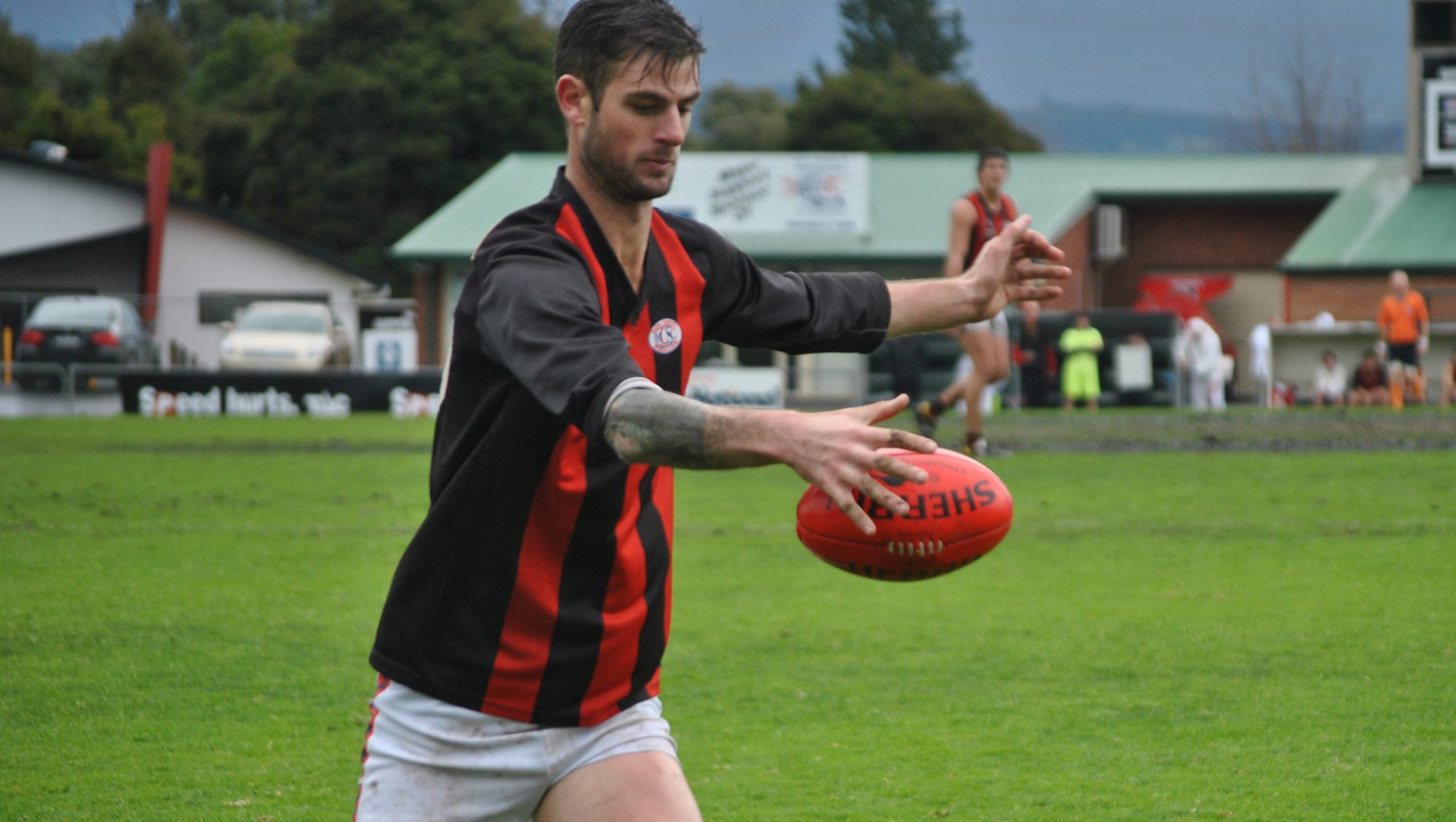 Sale slips away from Moe

MORWELL used the slippery conditions better to defeat Maffra by 13 points to maintain its hold on second position on the Gippsland League football ladder.

The Tigers won 8.15 (63) to 6.14 (50).Such were the wintry conditions at Morwell, the lights were turned on during the final term of the reserves match.

The rain did cease by the start of the senior match but did return for the second half. By then the Tigers were leading by 24 points.

The Tigers got the jump on the Eagles in the muddy conditions with a four-goal to one first term. The home side had better execution in front of goal as the Eagles were left footed at times.

The muddy conditions combined with the opposition pressure combined to make it difficult for either side to score goals. This was evident during goal-less second quarter.

During the second term, the Eagles had the better of play but could not convert for forward entries as the Tigers’ defence held firm. The Eagles were fortunate not to head into the main break by more than the 21 points as the Tigers missed some good opportunities for goals late.

The Tigers appeared to take control of the match early in the third quarter when Mannon Johnson kicked two of his three goals for the match.

The margin was reduced after Jackson Scott knocked the ball forward and Adrian Burgiel booted the Eagles’ first goal since the first quarter off the ground.

On many occasions the Tigers were left unmarked, such a time was when Tim Phillips was alone in the goal square to boot them 33 points ahead in time-on.

Minutes later Daniel Bedggood kicked a goal to help the Eagles head into the final term 27 points down and still with an outside chance of victory. That was a difficult task, considering the visitors need to kick five more goals than the Tigers having only booted three major so far.

The Eagles gave themselves a chance to pull off the win, booting three goals, including Darren Sheen’s only major of the match, to the Tigers’ one, but the Tigers’ solid first term proved the difference.

Michael J. Duncan celebrated his 150th senior game with a best-on-ground performance for the Tigers, keeping Sheen to only one goal, Pat McNulty, Adam Bailey and Joel Soutar worked well in the midfield, Tom Hutton contributed in defence. Jeff Ryan was dangerous in defence and attack.

Kel Porter, Ben Coleman and James Hammill, in his return from injury, led the Maffra midfield, but their work was not finished off due to Morwell’s solid defence.

Brent Connelly won the ruck contests, James Huts stood up in defence, and Adrian Burgiel tried to make something happen for the Eagles in attack.

WARRAGUL held top three aspirant Wonthaggi goal-less for three quarters during an upset four-point win.The Power kicked all four of its goal in the first term of the low-scoring encounter.

The visiting Gulls drew within a point at the final change and kicking the only goal of the fourth term to win 5.4 (34) to 4.6 (30) and hand the Power its fourth consecutive defeat.

Mark Collison was the Gulls’ best with support from Clinton Rowe and Josh Helliwell.

Chris Wylie and Lee Warnett were the Power’s best.

TRARALGON moved back into third place after defeating Bairnsdale at home by 54 points.

The Maroons could have killed off the contest early but kicked four goals from 14 scoring shots during the first term. They eventually found their accuracy to win 13.17 (95) to 6.5 (41).

Wonthaggi’s upset loss keeps the Redlegs a realistic finals change, but they are still a win a considerable percentage outside the top five with four rounds remaining.