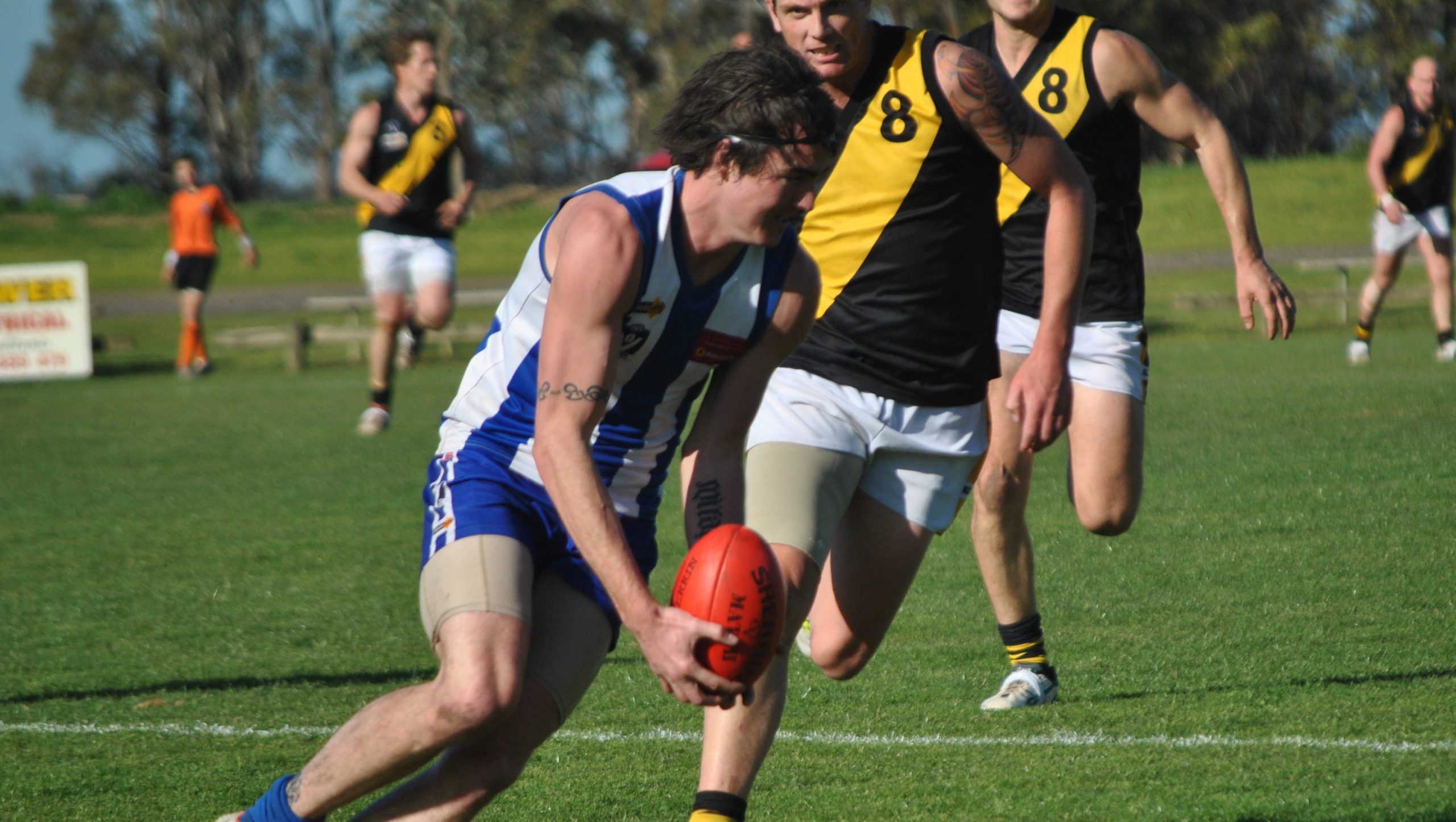 HEYFIELD seniors captain Dave Kelly finished his gruelling 100 kilometre run to raise funds for his 13-month-old daughter Ivy after his side defeated Gormandale by 48 points.

Kelly’s teammates and Gormandale opponents joined him for the final part of the journey.

Booting 11 majors in the first half, the Kangaroos struggled to score after half-time, registering just one goal to be out-scored by the Tigers, who booted three.

After a dominant first half, the minor premiers struggled to find their targets in front of goal in the third term. At the other end of the ground it was the same tale with only eight behinds scored between the sides.

The Tigers came out hungry in the final term as they looked to regain some respectability, slotting home three goals to one.

A GOAL in the dying stages gave Woodside a one-point victory over Glengarry and also kept its finals hopes alive.

The Wildcats booted five unanswered goals in the first quarter, using the breeze to their advantage. Led by Justin Staley, Damien Kerr, Adrian Fazioli and Rob Michaelides, the Wildcats boasted plenty of ammunition in front of goal.

The Wildcats led by 28 points at the first change before the Magpies registered their first major in the second and reeled the margin back to 16 at half-time.

The sides exchanged blows in the third term, with 10 majors scored. Glengarry’s Josh King made his mark, stretching the limits of the home side’s defence.

Trailing by nine points at the final change, the contest was anyone’s, but kicking with the wind, the third-placed Magpies appeared to have the goods.

The Magpies hit the front by five points with minutes remaining and appeared on song to snatch the win before a late goal in the dying stages saw the Wildcats prevail by just one point, 15.6 (96) to 14.11 (95).

CHURCHILL was forced to work hard for the points and ensure its finals ambitions stayed alive with Sale City taking the contest up to its more fancied opponent.

With 131 points separating the sides last time they met, the Bulldogs were not content in seeing a similar score line as they came out strongly, booting five goals to four in a blistering opening term.

Holding strong, the home side was not phased as the Cougars drew to within seven points at the main change. Led by Corey Oliver and Luke Hedger, the Bulldogs kept with Churchill in the crucial third term, to maintain their lead, albeit three points at the final change.

FOR the second time this season, Cowwarr claimed the bragging rights over second-placed Traralgon-Tyers United, winning 13.9 (87) to 10.19 (79).

Struggling to make the most of their opportunities in front of goal, the Bombers will be ruing the one that got away as they now find themselves locked on 40 points with four other sides.

The Saints took a 13-point lead at the first break before the Bombers regrouped as they worked hard to match the home side before the main change.

Booting 4.8 in the third term, the Bombers took the lead, however costly errors in front of goal prevented the side from imposing further scoreboard pressure.

Regaining composure at the final change, the Saints regaining the lead to ensure they remain in contention for a finals berth.

Tim Johnston finished the match with three majors to take his season tally to 61, 12 ahead of the competition’s next highest goal scorer Justin Staley. Ben Plozza chipped in with three.

For the Bombers, Brian Graham was a valuable addition back into the side, booting four majors, while Wade McNeil worked hard to set-up opportunities for his side and Luke Middleton was tireless in his efforts to provide his side with first use of the ball.