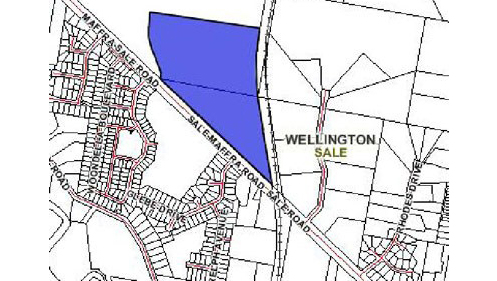 THE new Sale Greyhound Racing Complex could lead to the creation of at least 20 jobs.

The club is seeking approval to develop a new complex, which would include track, hospitality and accommodation, on 17 hectares of land on Maffra-Sale Rd, immediately west of the rail line.

As reported in the Gippsland Times on Tuesday, the club needs to upgrade the track kennels on its current site the nearby Sale Showgrounds by 2016, it felt relocation was the best option.

The club claimed the shape of the current site was not ideal for the track, with a sharp bend deterring many trainers and breeders racing their dogs at Sale.

The club last year submitted a request for Wellington Shire Council to rezone the land from residential and rural to a special use to allow for it to be used for racing.

With the proposal a departure from the council’s Sale, Wurruk and Longford Structure Plan, the club has prepared a strategic justification to support its case to rezone the land.

The strategic justification document, which outlines the benefits of the proposal and how issues such as drainage and traffic management would be addressed, is open for public comment.

Nick Anderson, who is consulting the Sale Greyhound Racing Club on its planning application, said the process would help the club, Greyhound Racing Victoria and council know the level of community support for the project.

Mr Anderson said the project would create at least 20 new jobs and boost the long term future of the club.

“In the 12 months that the application has been lodged with council, we’ve been working with officers, councillors and various referral and servicing authorities to make sure the concept can become a reality once it goes out through the public process. It’s not just a pipe dream,” he said.

“The 12 months post-lodgement has been designed to make sure that it’s robust, to get strategic and statutory level of support from the minister’s office and to give the local community as much information as possible in order for them to make an informed decision about their level of support.”

Councillor Malcolm Hole said the public now had its chance to have its say on the $15 to $18 million investment.

“We don’t just want people who don’t want this facility, but anyone who is in favour of it to give us, as councillors, a fair opportunity to make a decision when (the matter) comes back,” he said.

“Once the amendment documents are available, a public notice will be issued and feedback and submissions will be invited from the community,” he said.

It is anticipated that the planning scheme amendment will be available for public exhibition in November or December.

More information about the amendment visit the council website, www.wellington.vic.gov.au, or phone the strategic planning team on 1300 366 244.