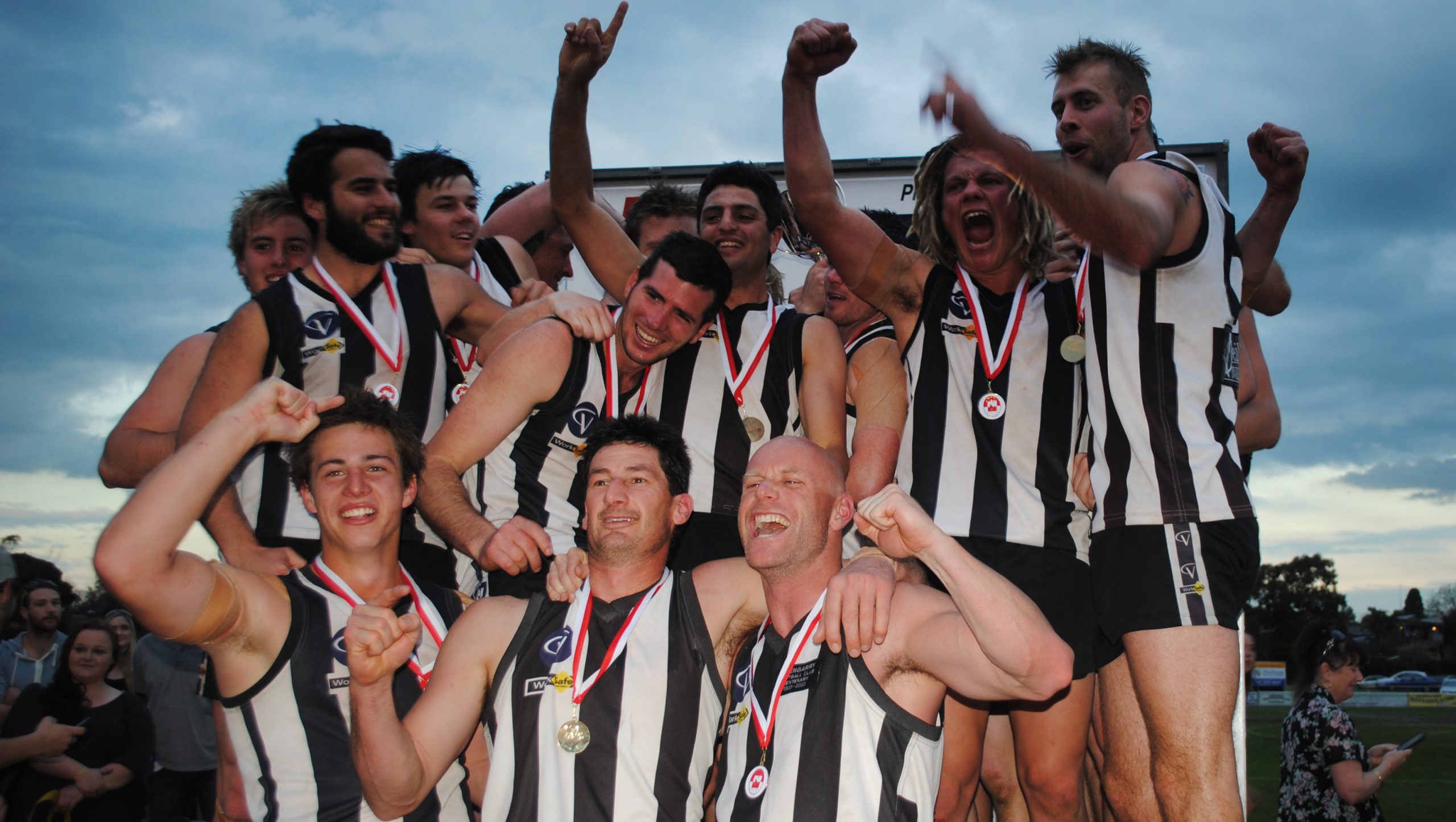 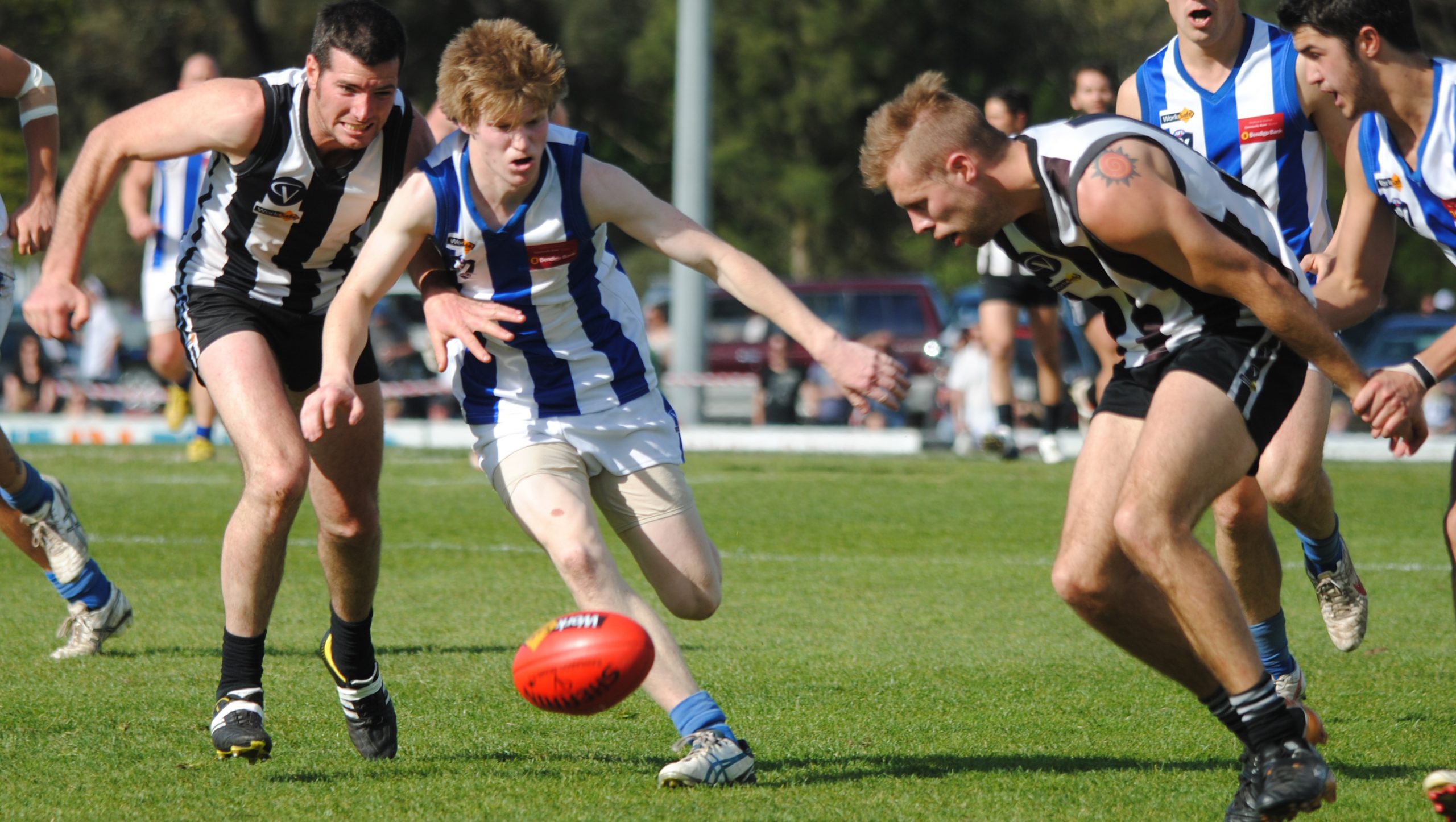 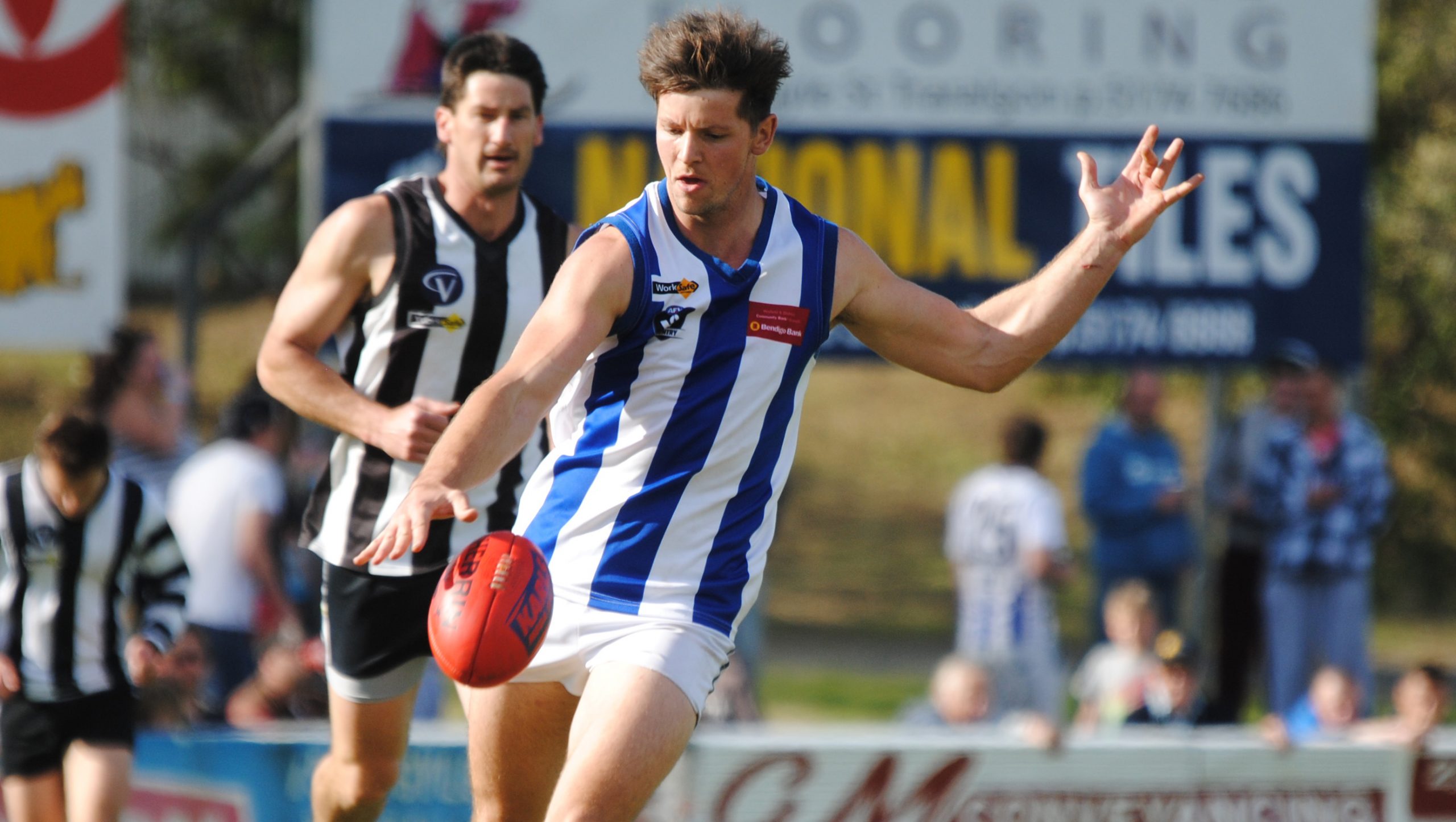 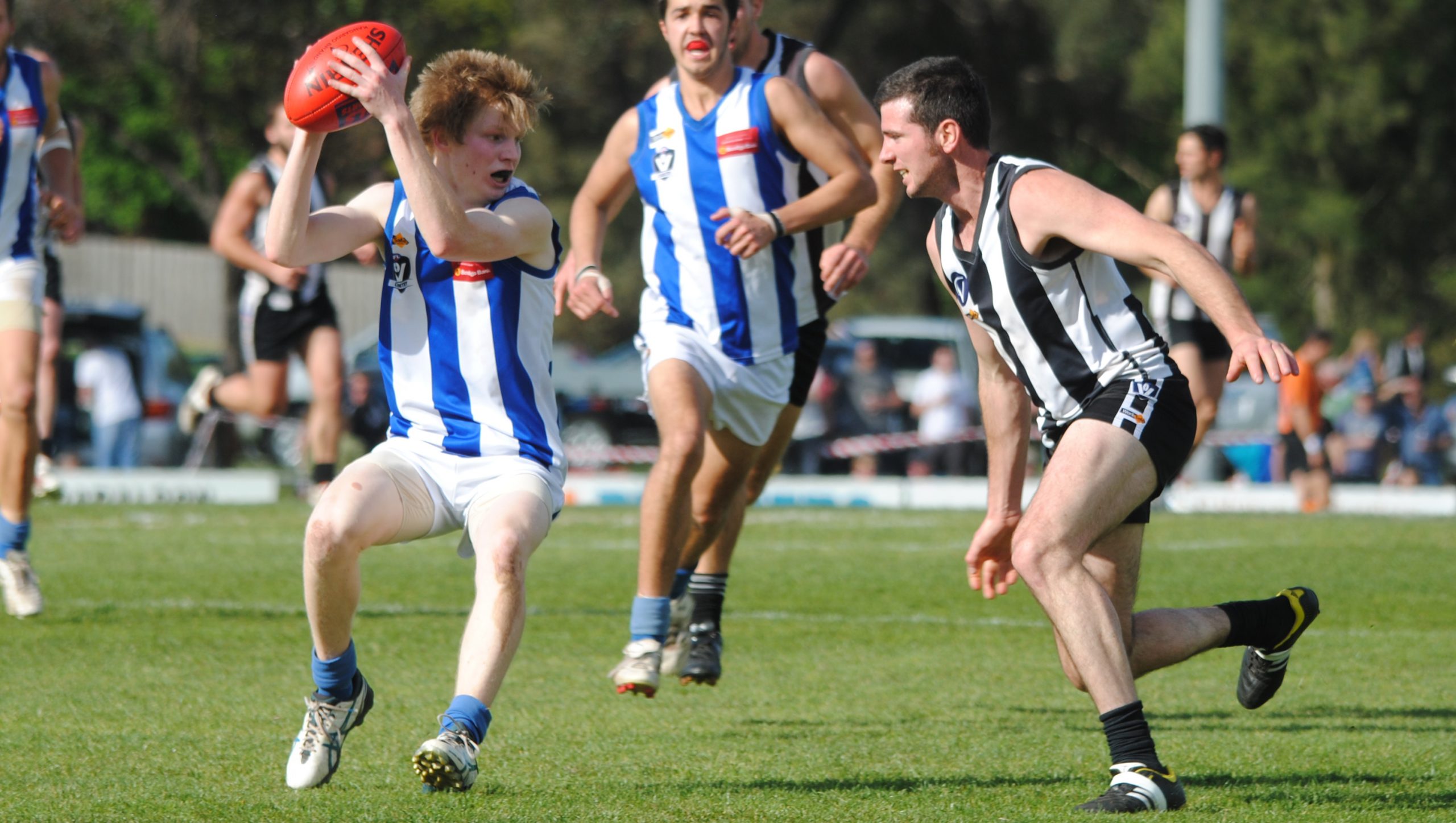 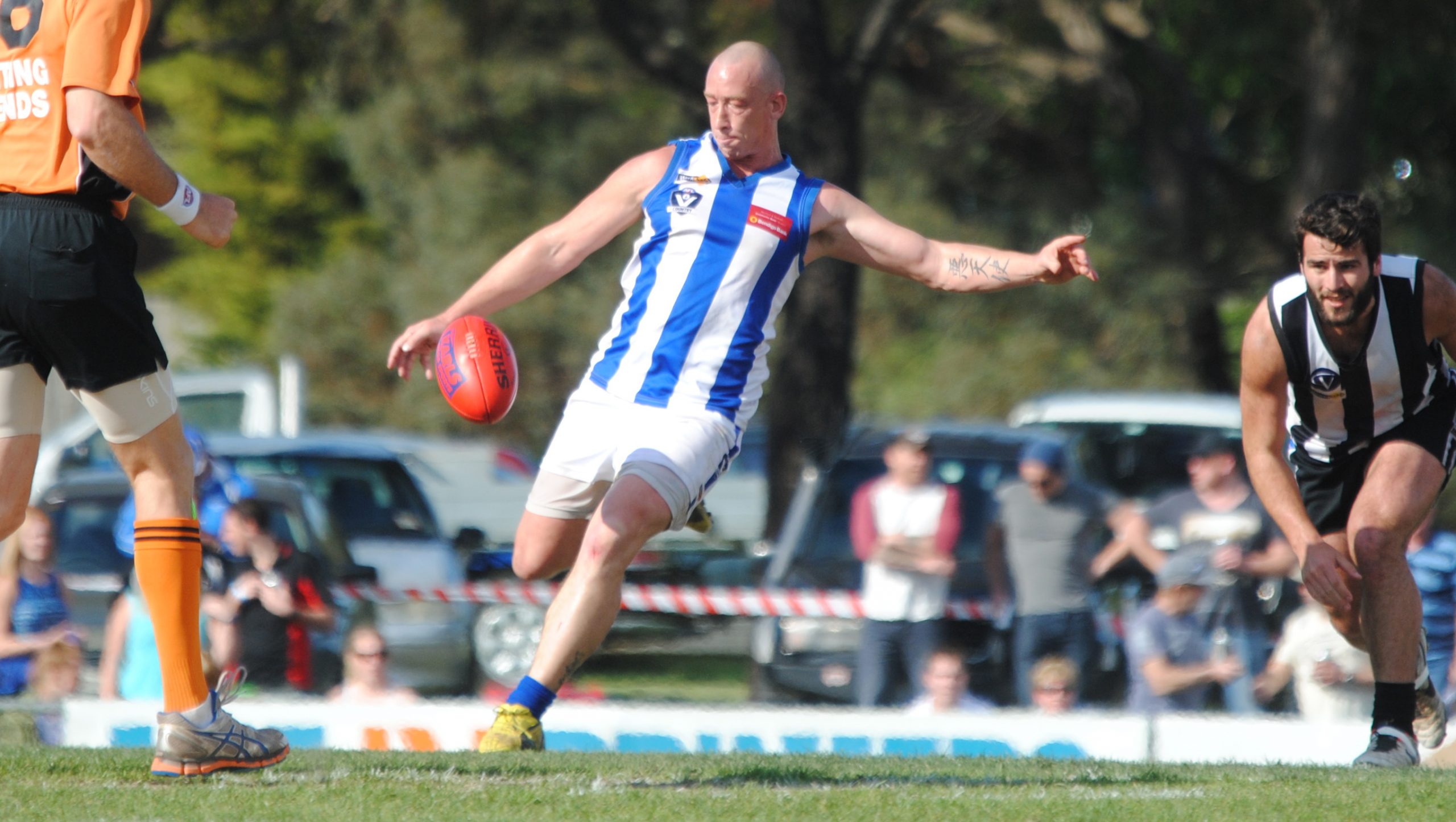 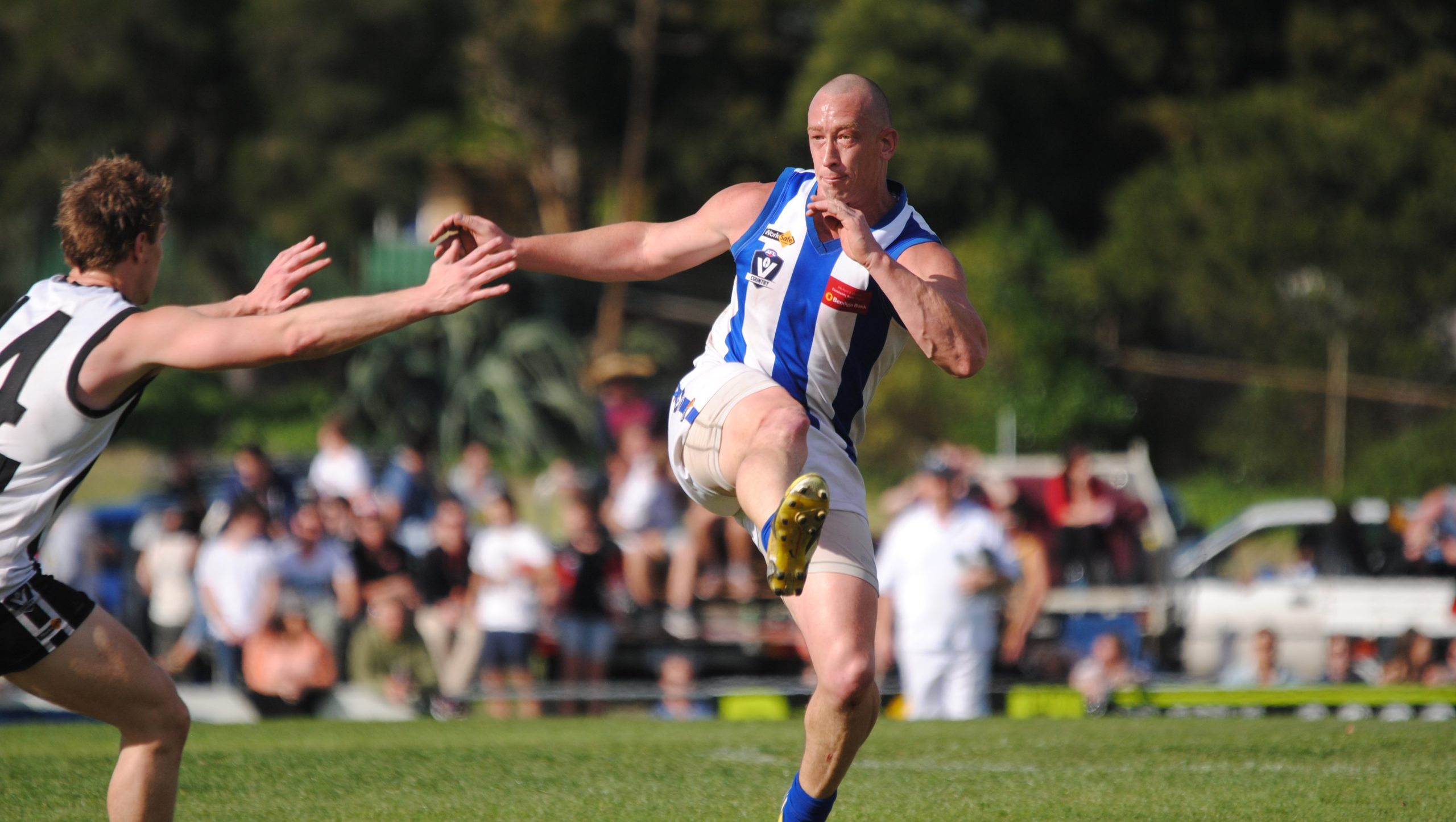 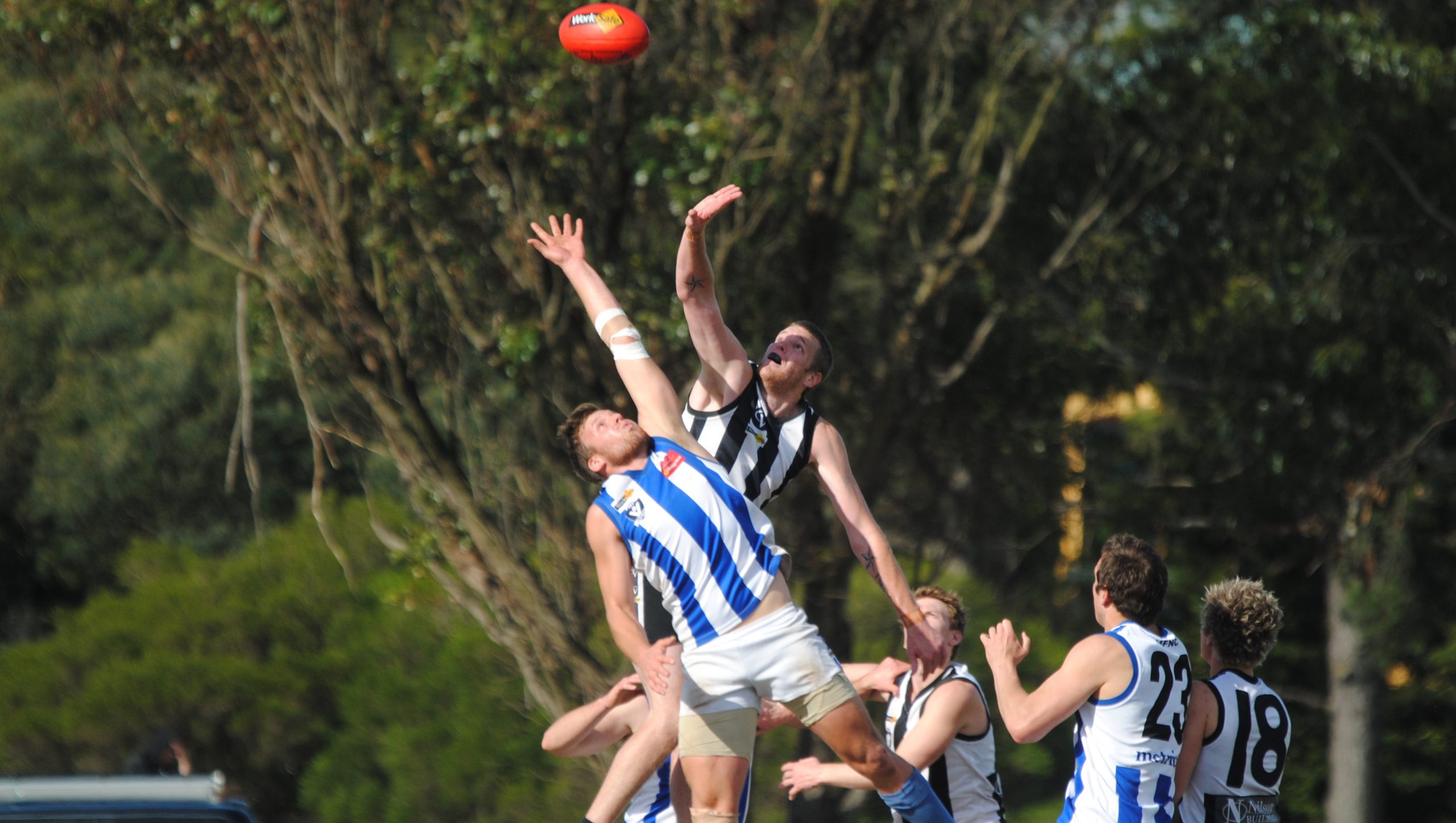 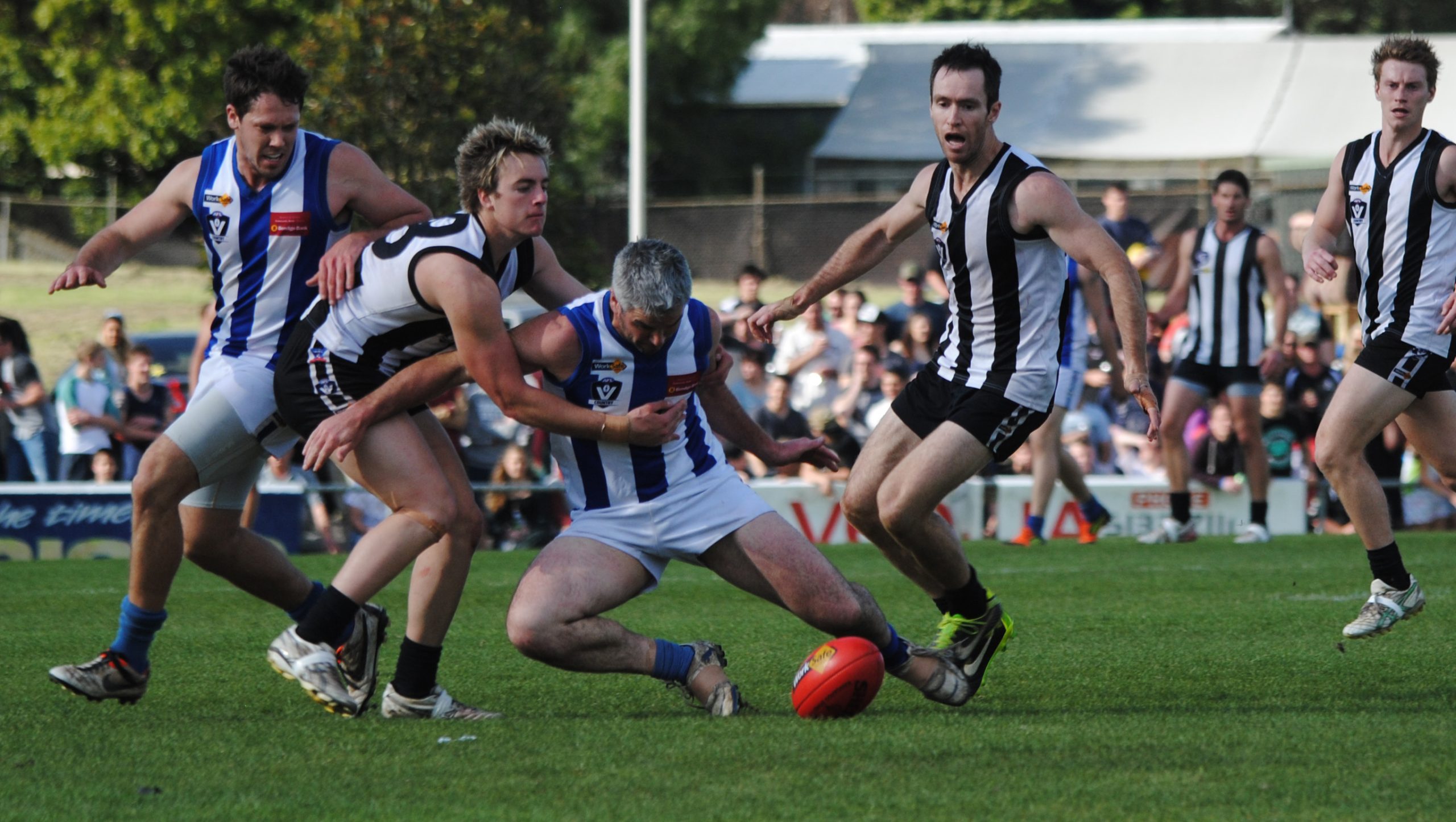 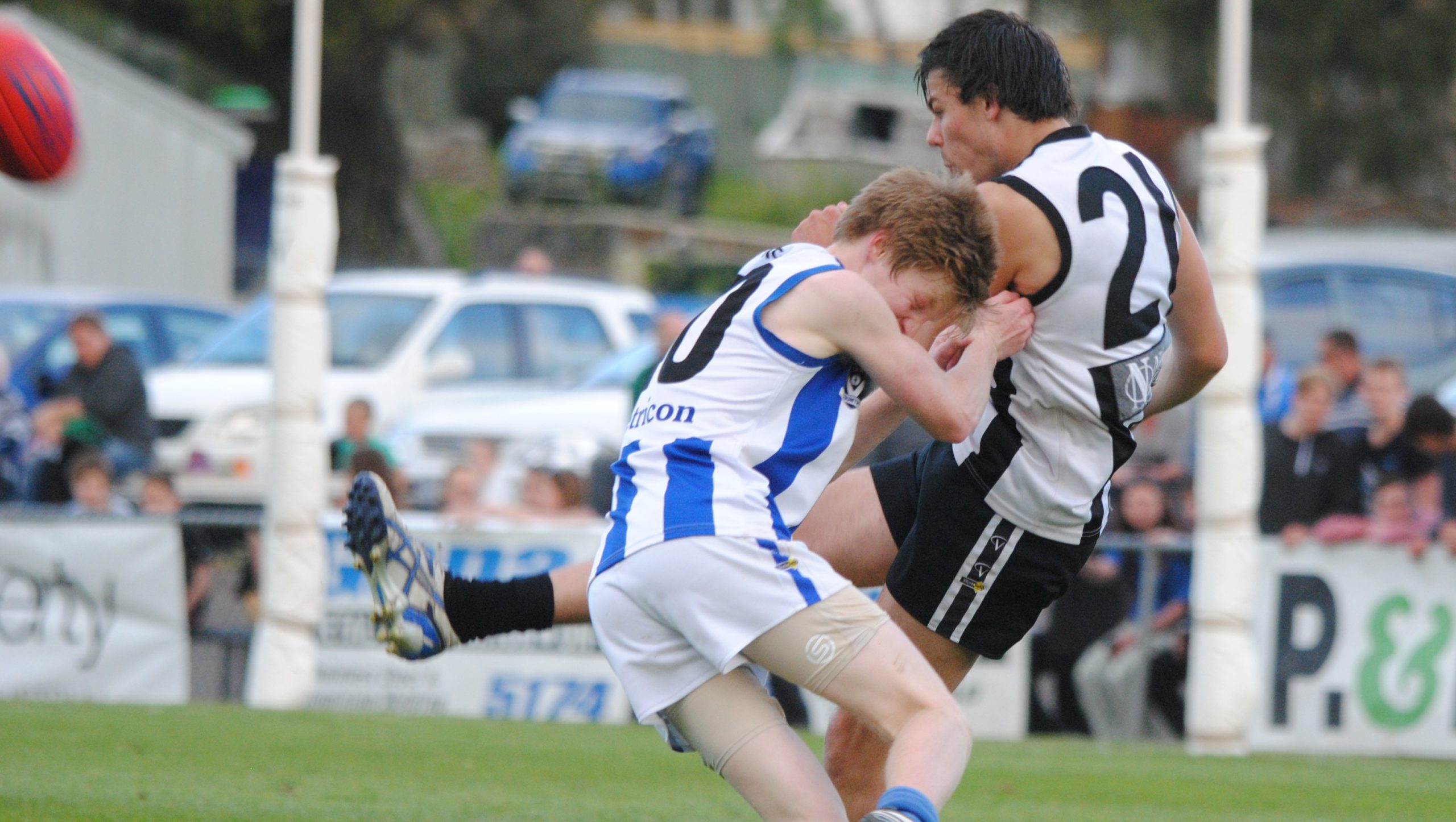 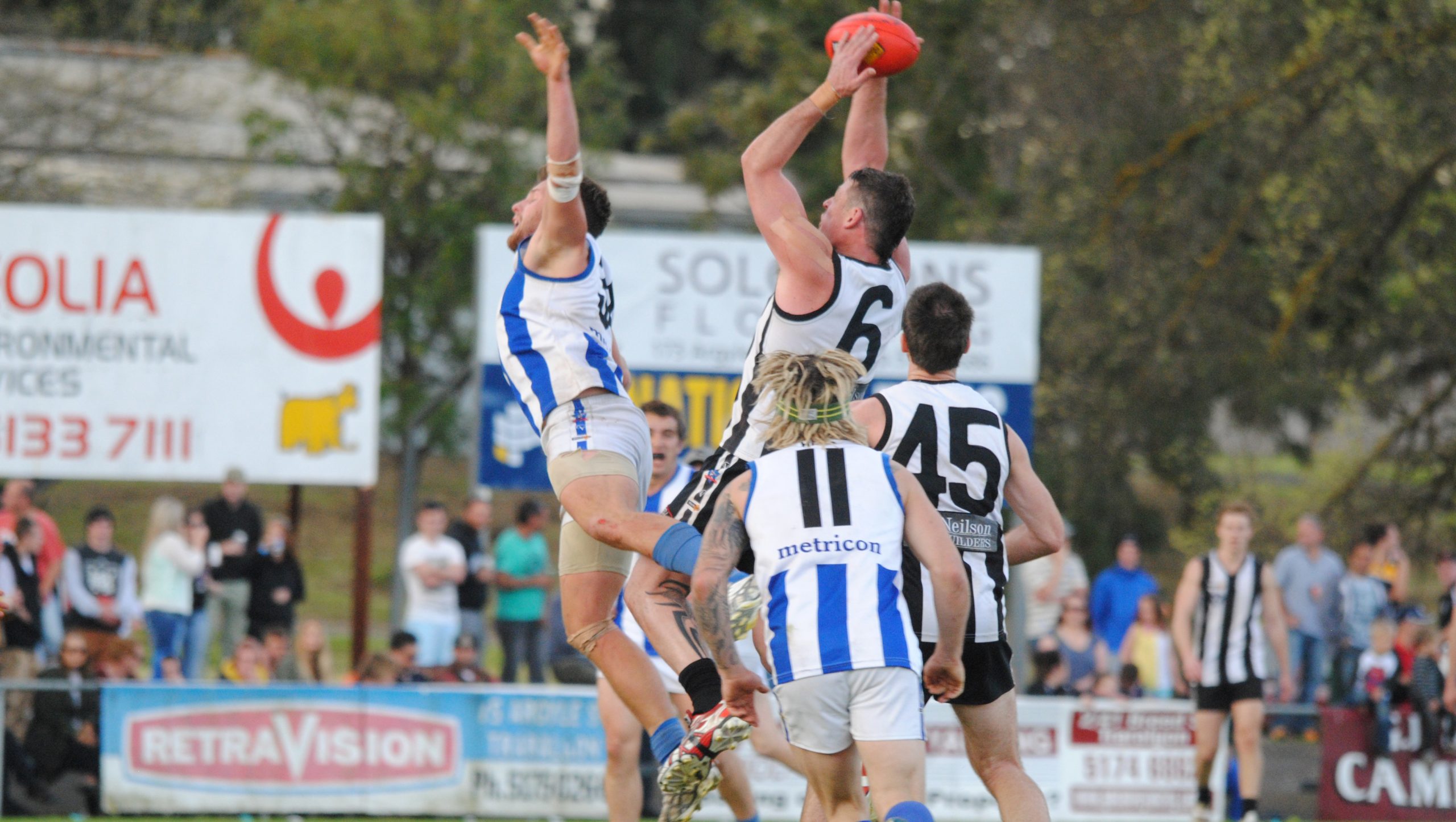 In front of a record crowd of more than 4400 people, with the grand final forced into extra time after Heyfield’s Cal Egan’s behind in the dying stages drew scores at 14.13 (97) a-piece.

Players had to dig deep with an additional 20 minutes of play before the crowning of the premier in the most enthralling grand final of the past decade.

King, the premier centre half forward of the competition, took all before him on the grand stage. Presenting himself for the leading mark, King booted a game high seven majors and contributed to a number of others and importantly when the game was there for the taking in extra time, stood tall to goal to extend the Mapgies’ lead to 13 points.

The Magpies star forward was not alone in a true team effort. The Magpies held on to win when the game was in the balance as the Kangaroos, led by coach Adrian Cox, threw the gauntlet down in a last ditch attempt to seal back-to-back flags, only to fall short by a straight kick.

King kick started proceedings in the opening minutes of the match taking a strong mark on the lead before booting the first goal.

After Josh Stubbe’s shot for goal on the run went wide, defensive pressure by the Kangaroos forwards set Brett Szabo up for what would be his only goal for the contest as he left the ground early with an ankle injury.

Cox quickly became the danger man of the quarter. The class of the coach shone though, dodging the opposition to shoot for goal from outside of 30 to draw his side 10 points clear.

King registered his second goal for the term before Kodie Woodland got the quick reply for Heyfield.

Connor Cook got the response to keep the Magpies within arms reach before Jesse Bedggood’s booming kick from outside 40 metres recorded the Kangaroos’ fourth major.

Glengarry began the second term with the first score before a quick reply by Heyfield’s Mitch Dowse. It would be the last major for the Kangaroos in a quiet term which saw the Magpies’ forwards turn it on.

Glengarry coach Ryan Potter’s major handed this side the lead to begin a blistering 15 minutes of play for the Magpies which saw King add three goals and Aaron Winkler get in on the act.

King turned the contest in the second term as the battle against defender Jesse Leeds looked to sit in King’s favour. The bigger body of the Magpie forward outmuscled the Kangaroos’ backline.

King’s third goal for the term handed the Magpies a 23-point buffer at the long change.

Heyfield appeared set for victory during the third term.

During the third term, the Kangaroos began to win a number of crucial contests around the ground as they looked to get back into the contest and take control. Playing man-on-man, the Kangaroos held the ball tight and shut down Glengarry’s run as they created their own.

Two quick majors by Mitch Dowse set the tone for Heyfield’s six-goal to one term as the Kangaroos’ defence, led by Scot Anderson and Matt Johnston, kept the Magpies’ forwards in close check.

The margin was reeled back to four points ahead of the final term, which could be best described as epic.

King and Mark Engley were the power forwards for Glengarry in the final term, while Kodie Woodland stood tall and added to his match tally of five. Seven goals were booted in the final term.

With exhaustion setting, in the stage was set for an extra 20 minutes of play which would decide the title holder.

King fittingly scored the opening goal before marking in front of Anderson, his next shot missed before redemption moments later as he added another as the margin blew out to 14 points.

Tactics quickly changed for the Kangaroos. Jesse Bedggood was thrown onto the ball, Cox lifted to another level, Kodie Woodland found the goals and the Dowse brothers Nic and Mitch Dowse attacked the ball with hard ferocious running.

Nic Dinsdale brought the margin back to a straight kick after several misses to Heyfield, who went on the attack again through Mitch Dowse however the siren rang on its last ditch attempt to level the scores.