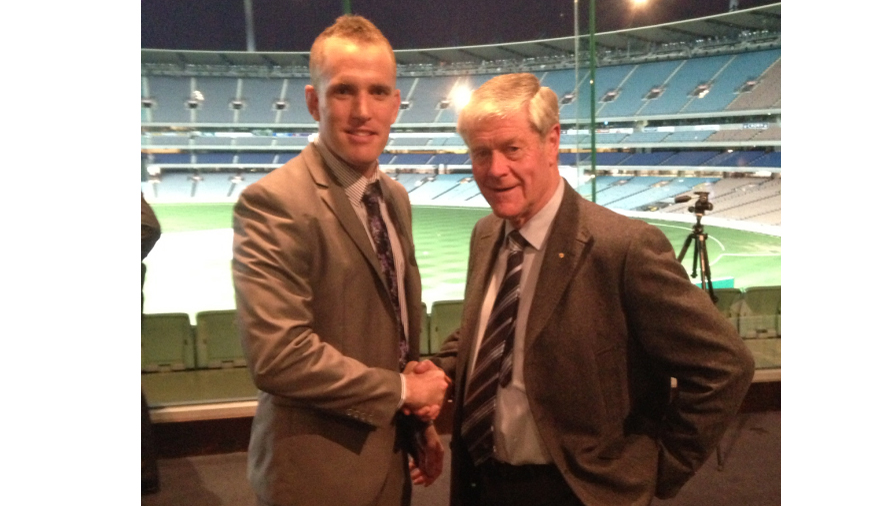 Coaching awards were presented to winners of the Auskick coach of the year, and junior, youth and senior coaches of the 18 regions in Victoria, with Ferguson receiving his award from football legend David Parkin.

Five hundred coaches attended the presentation dinner, with Balwyn coach Daniel Donati receiving the honour of overall coach of the year from Mark Williams, who is among the favourites for the St Kilda coaching job.

Ferguson said three players from the Magpies’ grand final team would try their luck at VFL in season 2014.

Ryan Pendlebury and Shannen Lange will begin pre-season with Port Melbourne, while Luke Collins has gained a position in Richmond’s new VFL squad.

“As a club we are very proud to see some of our home grown talent try their luck at a higher level,” Ferguson said.

“Luke has advised Sale that if he is not picked in the starting line-up on any given week he will be back in the Sale guernsey; we look at this as a win-win situation for both Luke and our club.

“In terms of recruiting, we are speaking with a number of locals from surrounding leagues to try to find guys who would like to improve themselves as a footballer in the best competition in Gippsland.

“This is to help bolster our very loyal Sale list which is extremely hungry after our grand final stumble in season 2013.”

Sale will begin pre-season training on Monday, December 2 at 6pm at the Gippsland Grammar Garnsey Campus with training to include players and coaches from all age groups.

Shane Fyfe will coach the under 18s with the assistance of the experienced Neil Bristow, while Andrew Dunkley and Chris Laverty will be hoping to take the under 16s to back-to-back flags.

“I will be supported once again by our assistants Stuart Anderson and Leon McAlpine,” Ferguson said.

“Our football department is privileged to be led by Scott Pearce, going into his fifth year as president.”

Entry is $20 per person. Tickets must be purchased before the night by phoning Sale Health and Fitness on 5143 3220.

The club will also host a rodeo in late February.