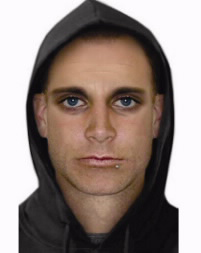 POLICE are appealing for public assistance following an armed robbery in Bairnsdale earlier this year.

Around 8.30pm on Thursday, April 19 an unknown male has entered the Bairnsdale Club, also known locally as the ‘Men’s Club’, on Nicholson St and produced a knife.

He has then made a demand for money and fled the premises with both the cash register tray and a quantity of cash.

The man was last seen in the car park at the rear of the Spotlight store and heading in a northerly direction.

The man is described as around 183cm tall with a broad chest, and skinny arms and legs.

At the time he was wearing a dark coloured hooded jumper and was armed with a knife.

Nobody was injured as a result of the robbery.

A man was also seen in the Bairnsdale port area shortly after the incident and police believe this man may be able to assist with their investigation.

The East Gippsland Crime Investigation Unit is investigating the matter and have released a FACE image of the man seen in the port area.

Anyone with any information about the armed robbery or who can provide information on the man involved in the incident or the man sighted in the Bairnsdale port area is urged to phone Crime Stoppers on 1800 333 000 or visit www.crimestoppers.com.au