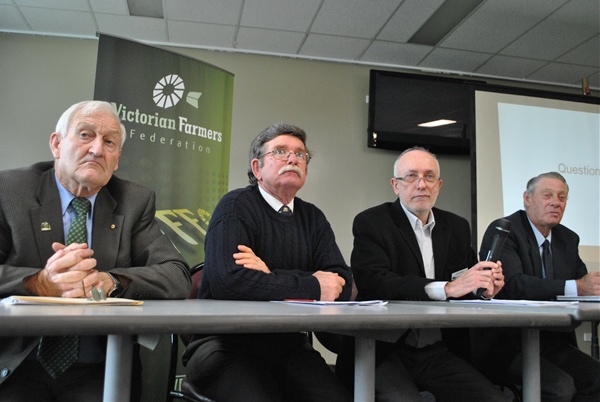 FARMERS’ rights were brought to the forefront in the coal seam gas exploration debate at a Victorian Farmers Federation forum in Sale.

Hosted by the VFF with a representative from the Department of Primary Industries, the forum was open to local farmers to learn about their rights when approached by a mining company wanting to carry out coal seam exploration on their land.

VFF Land Management Committee Chair Gerald Leach reiterated throughout the forum that the VFF fully supported farmers and land owners being given power of veto over any exploration carried out on their land, as well as ensuring rehabilitiation works on land that has been used for mining is thorough and appropriate.

“There have been examples in the past where rehabilitation has been poor,” Mr Leach told the Gippsland Times.

“Currently, in the (Minerals Resource (Sustainable Development) Act), there is a three year period which is the maximum that can elapse before a land holder can take any action about that rehabilitation not being satisfactory.

“We believe that should be extended out to five years, so that gives more time to see if anything adverse occurs.

“Sometimes you can get a short-term benefit from rehabilitation, but then something occurs – that might be subsequent subsidence, or a nutrient factor that comes in to play, whereas initially … there was some enrichment of the top soil, but then it becomes depleted.

“We feel extending the time would certainly help those issues be addressed.”

The VFF is calling for a number of changes to the Minerals Resource (Sustainable Development) Act and mining policy to help strengthen landholder rights.

Mr Leach said the Federation had organised the Sale forum to make sure Gippsland farmers clearly understood their rights and the VFF’s policy on mining and coal seam gas.

“There’s been a lot of misinformation and rumours around what’s happening with mining in Gippsland and we’ve had plenty of phone calls from concerned landholders on the issue.

“We wanted to give farmers an update on what the VFF is fighting for and how we hope to achieve it,” Mr Leach said.

Giffard-based farmer Peter Jennings attended the forum, stating he attended to learn exactly what his rights were.

“I know that Esso and Ignite Energy have an exploration licence in the area and it’s coming to the point of doing some exploration and there are potential impacts on land – not so much from the exploration, but certainly if it (mining) is developed,” Mr Jennings said.

“So I’m concerned, and I want to find out what my rights are.

“These companies come in, they’re there for five or 10 years, and I want to know what the potential impacts are.”