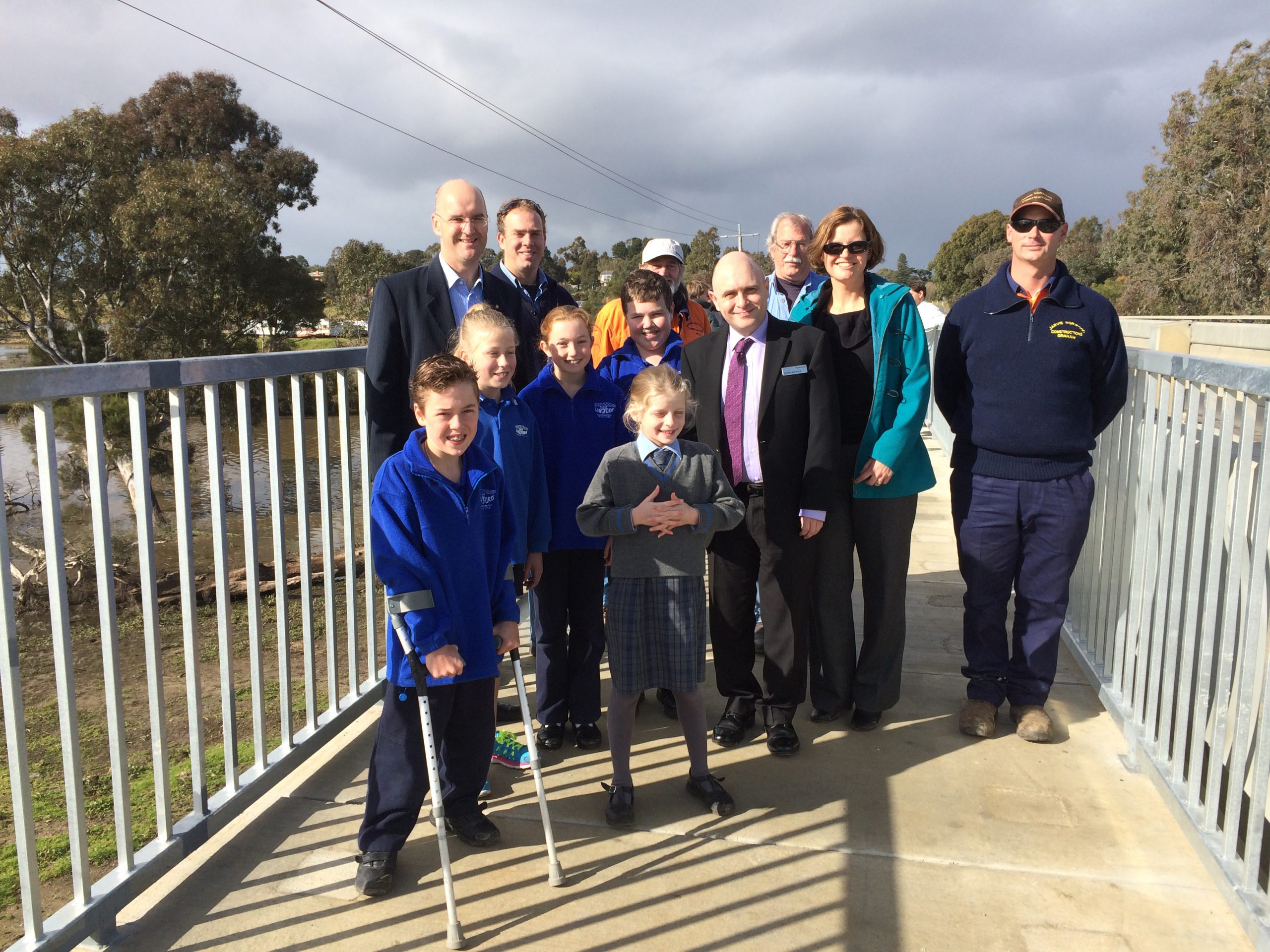 THE shared cyclist and pedestrian pathway between Sale and Longford is now complete, with the pedestrian bridge at Long Waterhole, Longford opened for use on Monday.

With traffic no longer using old sections of the highway, a new shared pathway has been created, with Eastern Victoria MLC Danny O’Brien and VicRoads regional director Scott Lawrence officially opening the bridge yesterday. Local primary school children, who are also likely to use the bridge, also attended the opening.

Mr O’Brien said sections of the path have been progressively built as part of the South Gippsland Highway’s flood protection project, but this bridge provided the final component to allow users to travel completely off the road between the two towns.

Running alongside the highway, the new pathway links up with existing paths through the adjacent wetlands and allows cyclists and walkers to travel between Sale and Longford without having to travel on the highway.

“Previously the path only went as far as Swing Bridge Drive, and from there users had to travel on the South Gippsland Highway, which was not ideal as it can get quite busy along this stretch of the highway,” Mr O’Brien said.

“Cyclists and pedestrians could travel off the busy road until the point where they had to share the Long Waterhole Highway bridge with the many cars travelling between Sale and Longford.”

Mr O’Brien said there were also large numbers of workers and trucks travelling to and from Esso and the vegetable farms in the area, along with many holiday makers heading to the 90 Mile Beach and Gippsland Lakes over summer.

“Now there is a much safer off-road alternative that I hope will encourage even more path users, especially families with children.”

The new 108 metre long bridge is made of concrete and steel and is attached to the side of the existing highway bridge. Concrete and steel barriers are also in place to protect pedestrian and cyclists from the highway traffic.

New sections of path have also been built to join the bridge to Swing Bridge Drive on one side and the South Gippsland Highway-High St intersection on the other.

Works started on the project in January and final landscaping works will be completed this coming spring, including planting shrubs near the path.

Deputy premier and Gippsland South MLA Peter Ryan said the path would not only provide improved travel between the two towns, but also make it easier for locals and visitors to explore the historic Swing Bridge and Sale Common Wetlands that the path connects to.

“Our region is a wonderful area to explore and this path is a safe and easy way for locals and tourists alike to enjoy some of what this region has to offer,” he said.

The Long Waterhole pedestrian bridge formed part of the $56.9 million final stage of the flood protection project along the South Gippsland Highway between Sale and Longford.