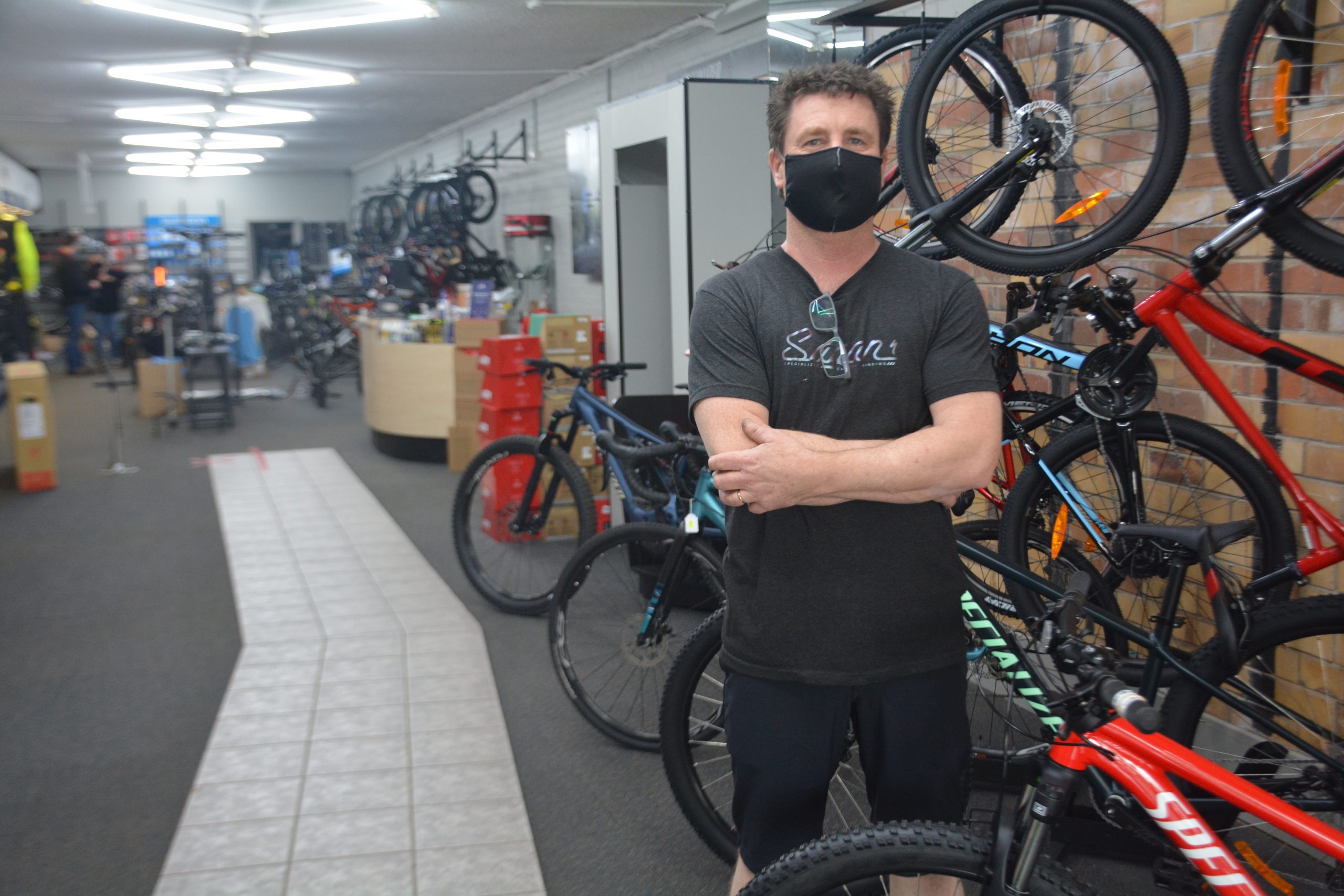 BICYCLE sales have skyrocketed during the coronavirus lockdown, with retailers in Sale finding demand is outstripping supply.

“They are flying out the door, well and truly so,” he said.

“After the first lockdown with people in Melbourne not wanting to use public transport, our suppliers were swamped.

“Unfortunately, this rise in demand is happening in what is usually the quiet time,” he said.

Mr Wilson said during the winter months wholesalers’ warehouses were usually allowed to run down in stock, in anticipation of new models for the summer season.

The demand for alternative transport and for exercise had caught the industry by surprise.

“The demand is unusually strong, and you just have to hope that a percentage of the customers new to bikes stick with it,” Mr Wilson said.

He has found it difficult to keep stock levels up with demand.

“I had 28 bikes turn up on Friday and another 14 arrive on Monday – and they have nearly all gone today [Tuesday],” he said.

While mountain bikes remain the biggest sellers, Mr Wilson said the demand was across the board.

“Mountain bikes, commuters, hybrids, recreation, racing, kids’ bikes – anything at all is selling,” he said.

While many people would imagine the majority of bicycles would be made in China, Mr Wilson said that was not the case, with many bicycle companies moving their factories to other Asian countries as a means of weathering the storm created by the United States-China trade war.

As the bicycle industry, like most manufacturing activity, has moved to a just-in-time parts supply for the construction of bikes, sourcing components has become problematic, as the COVID-19 virus restrictions have resulted in longer waits for supply.

“In Taiwan they do not warehouse components, so it has resulted in long waits,” Mr Wilson said.

Push ‘n’ Pedal also sells a range of bicycles made in Germany, but the whole bicycle industry has found supply from Europe even slower than from Asia, with production having been more heavily reduced through lockdowns.

“Anything to do with bikes has been selling – helmets, tyres – we have wholesalers now allocating what is available,” Mr Wilson said.

“Normally we would just order and it would be supplied.

“Now there has even been rationing of the number of tyres we could get for a few weeks, like the old 26-inch tyre that is not used anymore.”

Mr Wilson said the repair and servicing side of his business had been booming as well.

“Servicing is ridiculous,” he said.

“We are having to come in earlier each morning to be able to deal with it.”

Demand for e-bikes has also been strong, with demand outstripping supply.

“We have a couple of brands but have been told it will be February or March before we can get any more,” Mr Wilson said.

Apart from the first few weeks of the first stage three restrictions the bicycle business has been strong, and he is thankful for that.

Like many small businesses, Mr Wilson and his wife Kerry operate the business as a partnership, and with no access allowed to partnerships under the JobKeeper system, many partnerships have faced a tough time financially.

Ben Luciier at Mallard Cycles in York St has also found demand for bikes has increased – and it has not just been committed riders looking to upgrade their machines.

“General use family bikes have been the big movers – people are getting out and riding as a family more it seems.”

“We sell heaps of mountain bikes – every aspect of cycling is up.

“People just want things to do, and at the moment it seems riding bikes is it.”

Mr Lucier has also been flat out with servicing and supplying helmets and accessories as customers keep coming into the store.

“There have been lots of older people getting back into bikes after years off,” he said.

“We are selling lots of e-bikes too.

“Every aspect of the bike trade is booming.

“The problem we have is getting the industry globally restocked,” he said, with demand outstripping production right across the world.