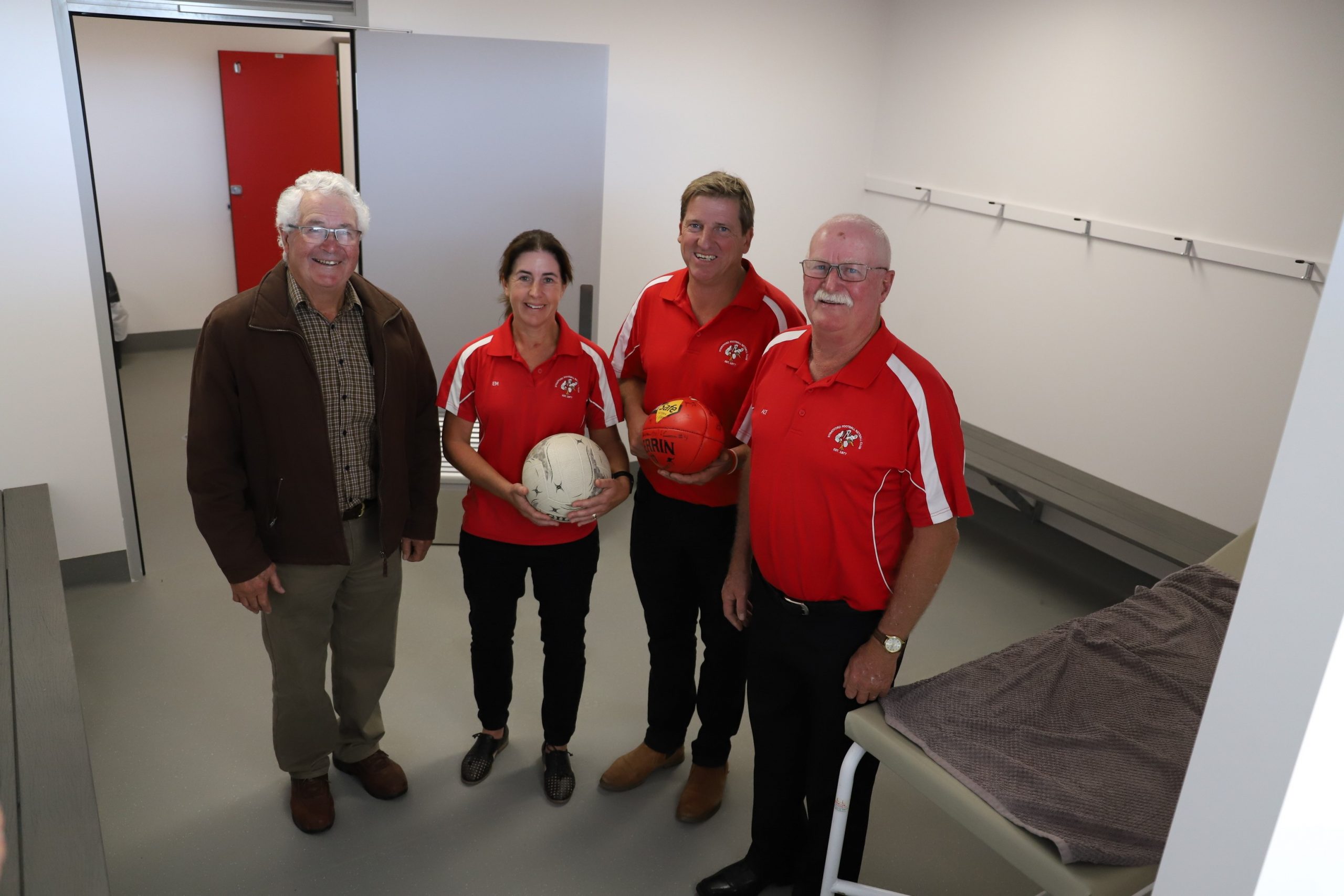 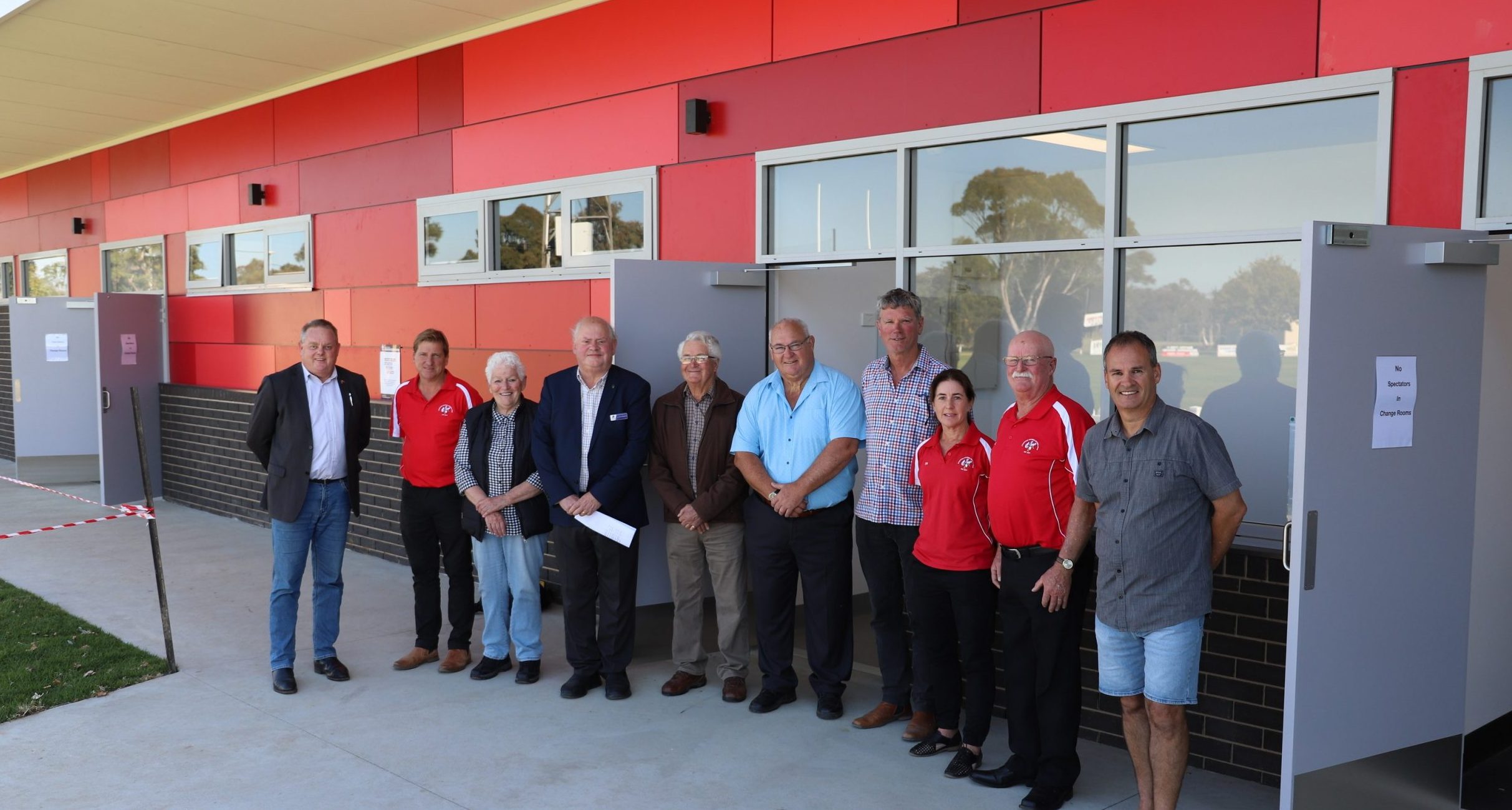 Home to both Stratford football-netball and cricket clubs, the refurbishments will provide enormous benefit to a large portion of the town’s sporting community.

With plenty of modern, clean lines and a good splash of the Swans’ and Redbacks’ signature red and white, the refreshed pavilion will provide the clubs with more female and family friendly options than its predecessor.

While the updated football and cricket changerooms are certainly a boon, the highlight of the refurbishment is the addition of the netball changerooms.

Coupled with its professional surface grade court, shed and upgraded lights, installed in 2017, Stratford Football-Netball Club now leads the way for other clubs locally, topping the charts as arguably the best netball facility in the region.

In fact, the new facility is so fresh turf was still being laid just before the club’s first home game, with a staggering 2000 spectators getting the first peek at the new facility.

Wellington Shire mayor Garry Stephens said it was important to recognise how crucial sport in small communities like Stratford was, and welcomed the move to provide up-to-date, modern and clean facilities for girls and women.

“I can remember the netballers used to get changed in their cars many years ago, or they might have had a little hut down the end of the court, and they’d have to try and be gymnasts as well as netballers,” he said.

“Facilities such as these give the best possible support for our female sportspeople who want to take part in local sport and improve their health and wellbeing.”

Stratford’s netball club is going from strength to strength – boasting the reigning East Gippsland league A and C grade premiers – and the new facilities put them in the enviable position as one of the most attractive netball clubs to play for locally.

Netball committee representative Emma Nowak, who has been involved in the Stratford netball scene for 35 years as both a player and a coach, said how grateful the netball community was for the new facility.

“When I started playing senior netball, we had to walk down to the primary school to play while the footy was on, and we trained on the old fire track – without any lights,” she said.

“We sort of had to get in line where the lights were so we could see the ball. Netball certainly wasn’t a priority in those days.

“After major fundraising by the netballers, a court was built, but it was still well away from the clubrooms, and we had no facilities.

“Toilets were an essential part of our warm up, we’d have to incorporate them into our run before we played.

“With the addition of the new netball court near the clubrooms a few years ago, we finally felt like we were apart of it.

“The area between the new court and the oval is just a great meeting place for spectators to watch both games happening.

“The changerooms and storage sheds that have been built for us have been amazing, and the girls on Saturday were so excited to have a place to get ready for their game.

“The benefits that this new facility will have for junior and senior clubs are enormous.

“There’s barely a night, especially in winter, when there’s not someone here practicing for football, netball or cricket.

“On behalf of the netballers, I’d like to thank everyone who has been part of this project, you’ve done an amazing job – thank you.”

Gippsland East MLA Tim Bull emphasised it was the volunteer-run user groups that pushed for the redevelopment that were to credit.

“It’s relatively easy for us to come here and announce funds and build these things, because it’s taxpayers’ money – it’s your money that goes into this – and in relation to the council, it’s ratepayers’ money,” he said.

“But it’s very easy to support clubs that have a well-prepared plan, advocate strongly, and are prepared to tip in a bit of their own.

“It makes it easier when governments at all levels get a submission put in front of them where the club has got significant skin in the game.

“When you have a look at the improvements that have been made here in the past decade, and they really are hugely significant.”