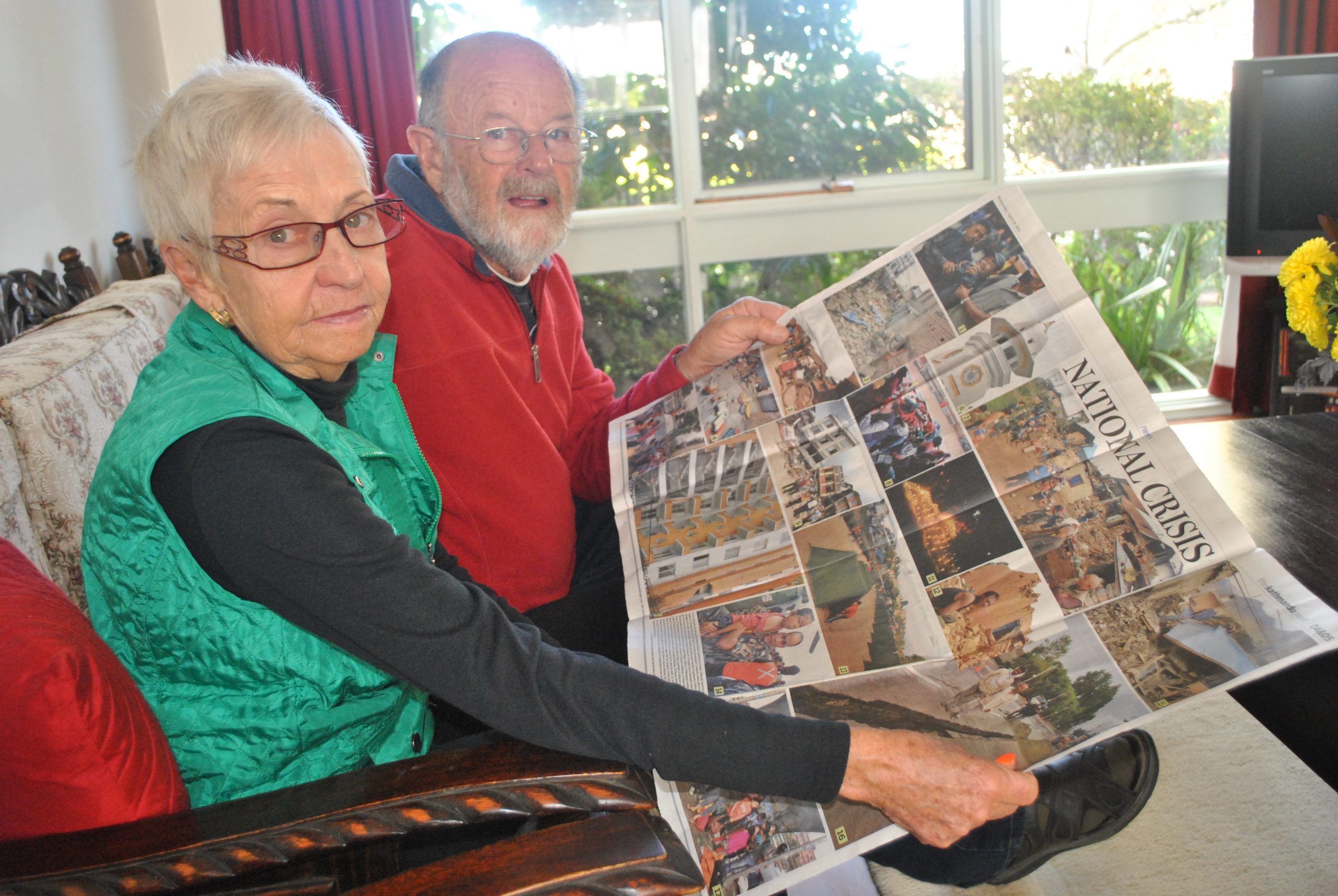 A SALE couple who were in Nepal when the 7.8 magnitude earthquake struck on April 25 are urging locals to dig deep in their pockets to help.

Sale residents Mary and Les Jackson were in a village about 75 kilometres from the epicentre when the earthquake hit.

They arrived in Kathmandu on April 22 and had planned to stay for about two weeks, but only four days into their trip, the earth began to shake.

On April 25, Mary and Les travelled about 25 kilometres to the home of Sita Adhikari, a woman they had lived with for five months in 2002.

They were just sitting down to a magnificent meal that Sita had prepared when they heard a noise, which Les described as sounding like a thunder clap.

Then at 11.56am, with no warning, the house started “bucking like a horse”.

Mary said the walls started moving in every direction and the floor was trembling.

“The cupboard door opened and everything was flying out of it,” she said.

Les said he had to grab Mary by the arm and almost drag her out the front door.

“For about five seconds I was thinking, this could be it,” Les said.

The safest place to find refuge was outside, out of the path of houses and buildings that could fall.

“It was a farming area so we were on the ground, in the veggie patch,” Mary said.

Les said as they were fleeing the house, he could see water suspended just above their drinking glasses.

When they returned later, the glasses were nearly empty, but were still upright.

Les thought the quake lasted about a minute, but because of the shock, he couldn’t be certain.

“You didn’t know cause you were in such shock,” Mary added.

The epicentre of the earthquake was about 50 kilometres northwest of Kathmandu.

“We were on the other side, but it didn’t diminish the strength of it in any way, even though we were probably 75km away from the epicentre,” Les said.

Les said they were among the lucky ones who had escaped unscathed.

“I believe we were so lucky that when we went out to lunch that house was a strong little house,” he said.

“She could have lived in one of the ones that just collapsed.

“I try not to think about it.”

Apart from a broken door, their friend’s house was left intact.

Two women within 100 metres of where Mary and Les had arrived for lunch were among the many thousands killed.

“There was an elderly Nepalese man where we sat and he was screaming every time there was movement,” Mary said.

“We walked up the track to where one of the houses was and then we saw all these women and children wailing.

“They carried out a woman at that time.

“That had an effect.”

About 4pm that afternoon, Mary and Les caught a taxi back to the Tibetan Guest House in Kathmandu where they were staying.

Mary and Les slept on the bottom floor of the guest house as there was no evidence of cracks in the building.

Outside, Nepalese people slept on the street, their homes nothing but piles of rubble or too unstable to return to.

“There are just so many people sleeping in the streets,” Mary said.

Amidst the chaos, Mary feared she would never see their son Anthony again.

Les assured her they would be ok, but being stranded in a ravaged Nepal, even he had doubts.

The following day, they were finally able to make contact with Anthony back in Melbourne.

“When my son phoned I started to cry.

“It was horrific. “It really shakes you, you know.”

Staying safe was their number one priority, especially with a high risk of aftershocks.

“About 24 hours later they had that next one, it was 6.9 (magnitude) so it was like another earthquake,” Mary said.

“We were in the middle of a square thing and Les said ‘run’.

“We ran into this building site that was open ground and all kinds of nationalities were in there.” Mary and Les remained at the guest house until they secured flights back to Australia.

They returned on April 30.

During two previous trips to Nepal, Mary and Les had trekked through Kathmandu, including a trek around Everest Base Camp in 2004.

Base camp was covered by an avalanche of snow following the quake.

The couple had returned to Nepal this year on a social visit to reconnect with Sita Adhikari.

Now they are concerned for her future, and the future of others affected by the quake.

“It will be a long, long time before they get over it,” Mary said.

She described the Nepalese as the most kind-hearted souls in the world.

Les said for something like this to happen to them was harrowing.

“They are normally very optimistic people,” he said.

“It’s really taken that out of them.

“They might get back to that eventually, but for now, they seem quite down.”

To make a donation towards emergency aid in Nepal, visit www.shelterbox.org/ or www.redcross.org.au/nepal-earthquake-2015.aspx