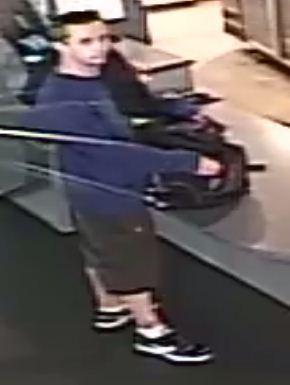 POLICE have appealed for public assistance following a car theft in Sale on Monday afternoon.

Investigators have been told the victim entered the Aqua Energy facility around 12.30pm and put his bag down before getting in the pool for his therapy session for a disability.

It is believed an unknown man, who may have followed the victim, removed car keys from the bag and left the facility.

The offender met up with a second person outside and went directly to the victims Subaru Forester station wagon and drove it away.

The man is described as approximately 180 to 185cm tall, medium build with short black hair shaved at the side and the back.

He was wearing a blue top, long brown shorts, short white socks and dark coloured runners with a white blaze at the bottom and he was carrying a dark coloured backpack and had sunglasses on his head.

The stolen vehicle is a black Subaru Forester station wagon with registration TTF 890.

Investigators have released an image of a man they believe may be able to assist with their enquiries.

Anyone with information regarding the incident is urged to contact Crime Stoppers on 1800 333 000 or submit a confidential crime report at www.crimestoppersvic.com.au