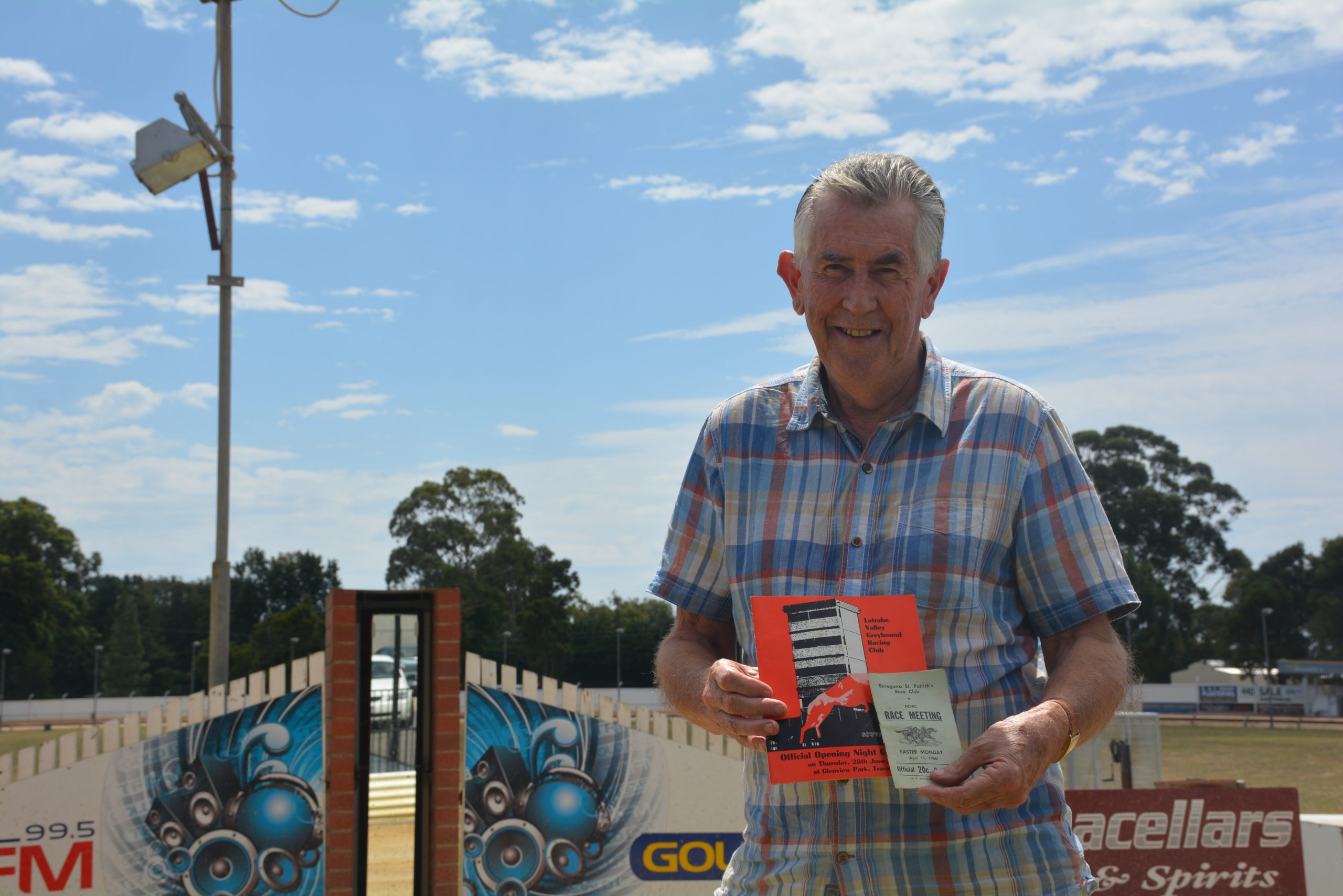 Since moving to Gippsland to work for radio station 3TR, Eustace has called more than 50,000 greyhound races.

“I hate to think of how many races I’ve called,” he said.

Eustace still has the form guide from Traralgon’s first race day, as well as his first race, at Birregurra, near Colac,  on Easter Monday in 1966.

“I was working in radio and there were two race meetings in the area, and the other guy … could only do one, so I got to do the other,” he said.

“Before that I’d just done a couple of years of going up to Ballarat on a Saturday afternoon and calling greyhounds, but this was my first really big time.

“Today there’s that many young guys coming up and they’re all really good callers.”

The biggest changes, according to Eustace, was the scale of the events, with the TAB now a gigantic organisation, and more money coming back into greyhound racing clubs.

“Here at Sale, I don’t know how many people we employ, but it’s a big staff, and the money has to be channelled back into the facilities,” he said.

“This is the greatest greyhound complex, and they’re always improving it, even though they’ll be moving in a few years.

“I go to quite a few tracks, and it’s hard to compare anything to this.”

Calling greyhound races brings specific challenges, with each race being less than 30 seconds long, and Eustace said it was still exciting.

“You try to call every dog in the race, even if it’s only 18s, because somebody, somewhere, has backed it, even if it’s 50 to one or two to one,” he said.

“Someone’s entitled to hear their dog, and if you don’t call it, you’re the world’s worst anyway.

“It keeps you on your toes.”

After having a short break for illness, Eustace threw himself back into racecalling.

“Since I came back from being a bit ill, I’ve got a new lease on life,” he said.

“I was out of the scene for a few months and I thought, ‘oh, am I going to be able to come back?’, but I’ve found that I’ve really enjoyed it.”

Part of his enthusiasm comes from living in Gippsland, which has a very strong greyhound racing culture.

“(Rosedale’s) a very strong area, because of the five acre allotments, you don’t have those in the city.

“It’s probably getting bigger (out here), as people move out of the city.”

After 50 years, and so many thousands of races, does Eustace still get nervous before a big race?

“Maybe on the Sale Cup or Traralgon Cup, I think if you didn’t you wouldn’t be at your best,” he said.

“If you think it’s just another race, people are going to be watching for this dog, it could be a champion.

Eustace said that he has no plans on slowing down, either.

“I don’t think age comes into it, as long as you’re not making mistakes.”