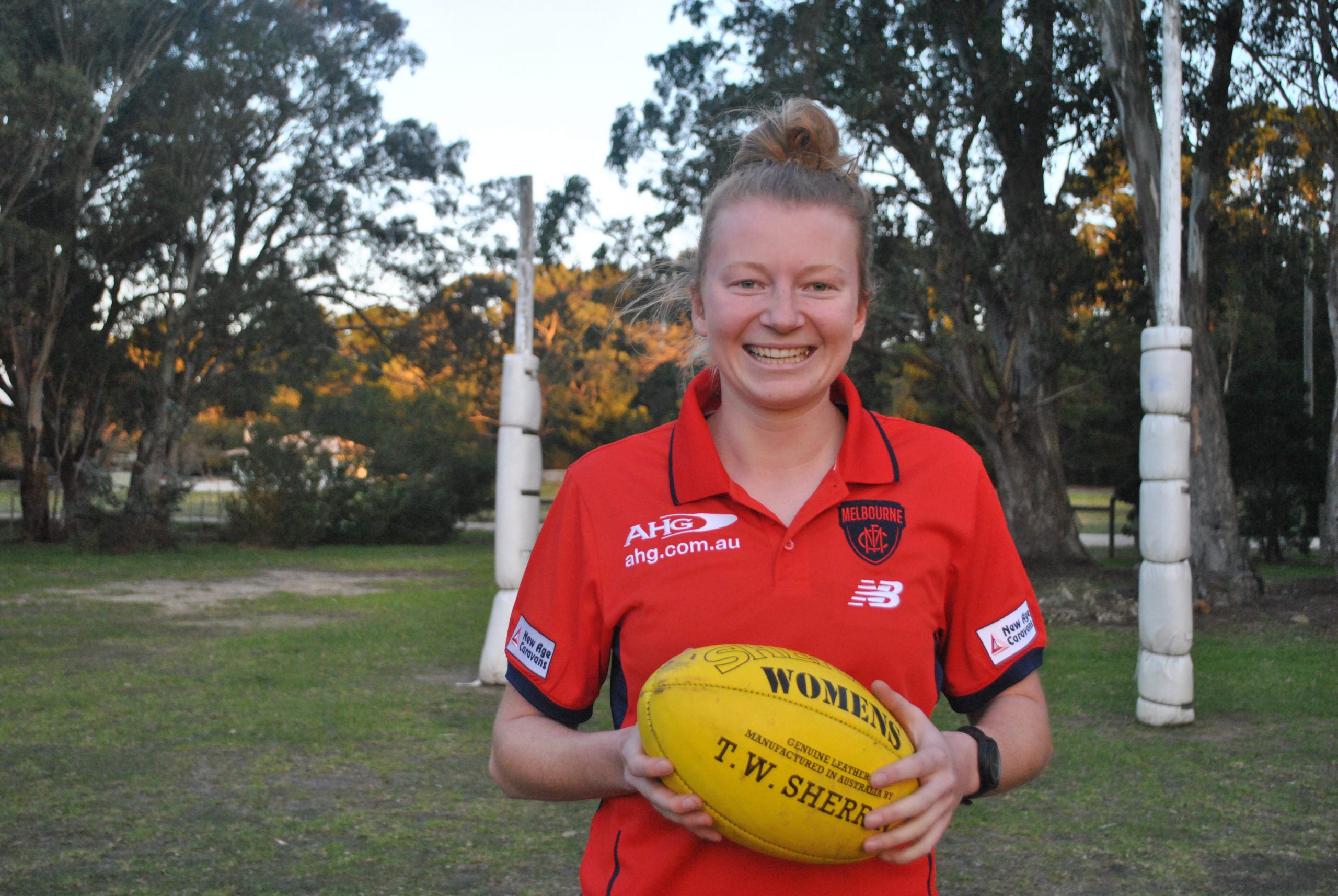 GROWING up, Amy Harrison never imagined being drafted to play for Melbourne Football Club at an elite level.

A Longford and Rosedale local, Amy fondly remembers forcing her sister to kick the football with her up and down the driveway.

A former Gippsland Grammar student, Amy was a regular by the posts at lunch time, swapping T-bars for runners to kick the footy with the boys.

An avid Collingwood supporter, Amy and her father rarely missed a home game during her youth.

So when the opportunity to play an elite level exhibition match against the Western Bulldogs at the MCG arose, Amy leapt at it.

“Growing up, you just never considered it, because you knew that you couldn’t because ‘only boys played AFL’,” Amy said.

Currently studying to be a paramedic at Victoria University, Amy said her love for football began when a friend asked her to fill in for the VU Western Spurs, formerly the St Albans Spurs, in premier division.

“They were still short as the season went on, so I thought, this is fun, I’ll keep doing it, playing netball and football until I got involved with the (AFL) Academy,” she said.

Amy was accepted to the AFL Academy, formerly known as the High Performance Academy for females, in November 2015.

Here she trained with 150 other girls as part of a growing Victorian cohort, before Melbourne selected her, along with two other girls from her native Spurs, to play in a series of 10 exhibition matches in 2016 to increase interest in women’s football.

From this, Amy hopes to be drafted back to Melbourne in October for the AFL national women’s league, but explains she would be honoured to score a spot on any of the teams.

Amy is thrilled to be involved with the first steps of professional women’s football in Australia.

“Australian kids have grown up with AFL, it’s our national game, so it just makes sense that men and women can both play it,” she said.

Amy realised the importance of female participation in AFL from her the Spurs’ coach, Debbie Lee.

“When she was young, she would kick the footy in the street, and if a car came along she would grab the footy and hide, ashamed that she was a girl playing football.

“People always thought she was trying to prove that she was better than the boys, but it’s not about girls being better than boys; it’s about girls having as equal an opportunity as the boys.

“Little girls get to play Auskick, and once they get to the end of Auskick, they get told, ‘alright, you’ve got to go play netball now’ and it shouldn’t be like that.

“Some of the girls that I play with in the league could play with the boys up until they were 12 and then were told ‘you are not allowed to play anymore’, and they would’ve had their hearts broken and been told to play sports that just weren’t their passion.

“You shouldn’t have to take a footy off your little girl at five years old and say, ‘hey, don’t worry about it, because you can’t play footy when you’re older anyway’.”

Amy admires pioneers such as captain of Melbourne Football Club women’s side Daisy Pearce for their influence on the younger generations to be a part of the sport.

“Girls should be able to turn up to Auskick in an AFL jumper that’s representing a girl they want to be when they grow up.

“It’s pretty overwhelming when little girls run up to people like Daisy and say, I want to be like you; that’s the way it should be.”

Amy urges the public to approach the topic of women’s football with patience, rather than dismissal.

“I think people need to watch a series of games and understand that women’s football is different to men’s football.

“When men’s football first came about, it wouldn’t have been polished or perfect, and every year they’re changing things to make the men’s game better, so I think people should be giving the same chance to the women’s game.

“Girls are being thrown into an elite program for the first time, so you need to allow time to let that work.”