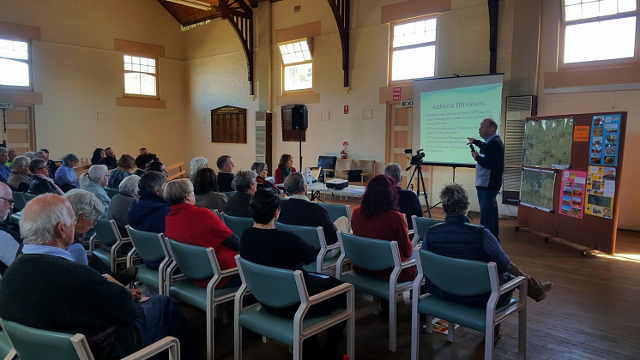 A RECENT community meeting opposing the proposed Fingerboards mineral sands mine was told such a mine potentially includes risks from heavy metals that may be in the mineral sands.

Andrew Helps, who has more than 40 years of national and international experience with heavy metals, spoke at the Lindenow meeting on Sunday, September 10.

According to the opponents of the mine, the project could be a public health, economic and ecological disaster; claims that proponents Kalbar Resources reject.

Kalbar has explained all such concerns and any other potential impacts of the project will be included in the Environmental Effects Statement investigations overseen by the state government.

The company explained many projects throughout Australia are assessed as ‘controlled actions’ under legislation.

All likely impacts, including those identified through commonwealth and state processes and public input, will be investigated and documented as part of the Environment Effects Statement.

The draft Scoping Requirements describe these matters in detail and Kalbar has engaged a team of technical experts to undertake the studies.

Kalbar Resources spokesman Martin Richardson said as all projects have potential impacts the EES process enables these to be studied and assessed, including what can be done to avoid, manage or mitigate any risks.

Mr Helps told the meeting it was the air-borne heavy metal dug directly from the ground that was the potential culprit, not the final product produced by the mine.

Given the extensive ramifications of the proposed project, Mr Helps believed the Environmental Protection Authority’s chief scientist should be a member of the technical reference group.

Mr Helps said the community needed to establish its own base-line data and to lobby politicians to prevent the proposed Fingerboards Mineral Sands mine happening.

Mr Richardson encouraged the public to read the draft Scoping Requirements at www.planning.vic.gov.au/environment-assessment/projects/fingerboards-mineral-sands-project and make any submissions.

“We agree with the community that, if the project goes ahead, it must bring economic and social benefits to the region, co-exist with farming and maintain our important environmental values,” he said.

“Of crucial importance is the health of people and the environment. Should the EES find that significant threats cannot be avoided or sufficiently minimised, the project cannot proceed.”