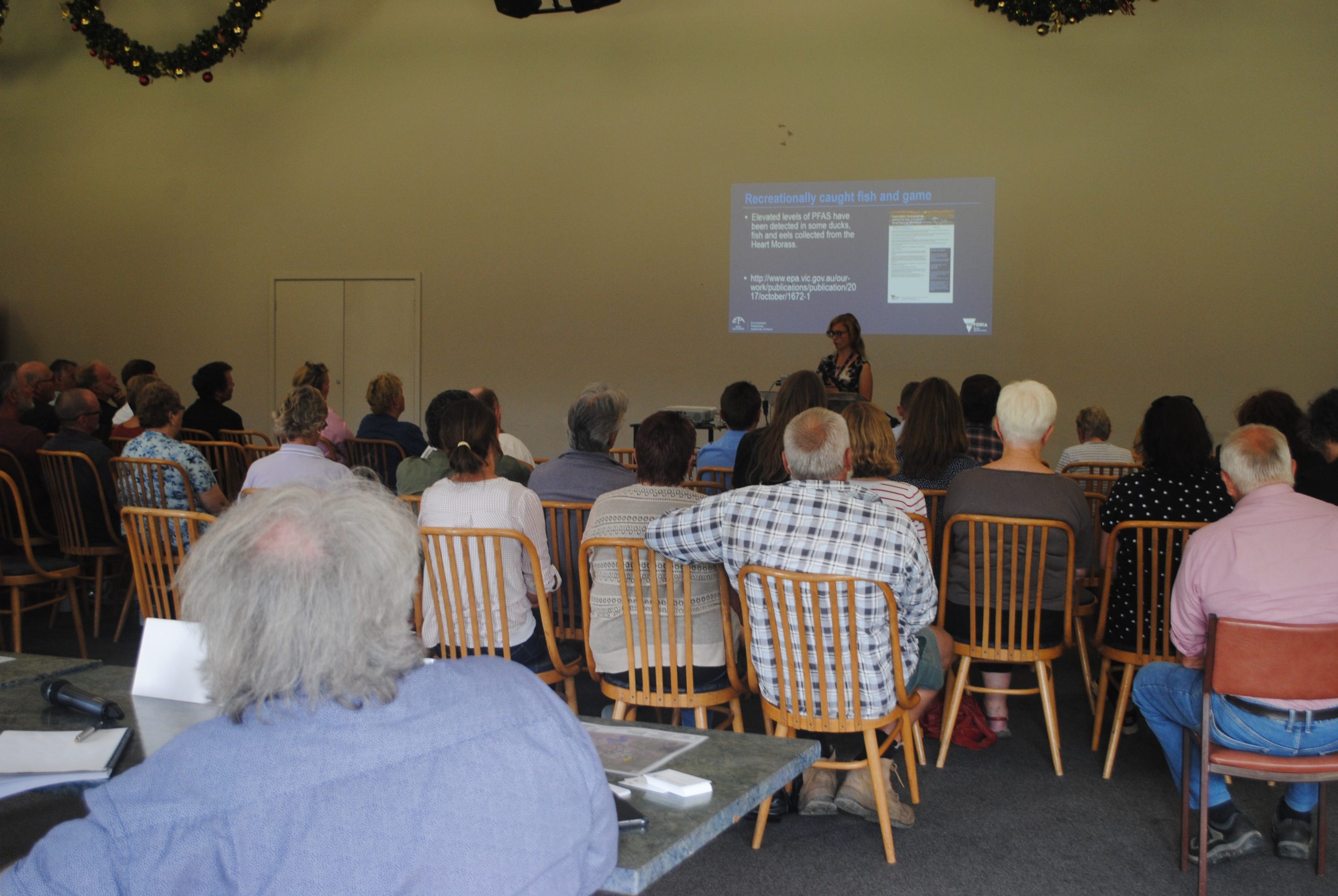 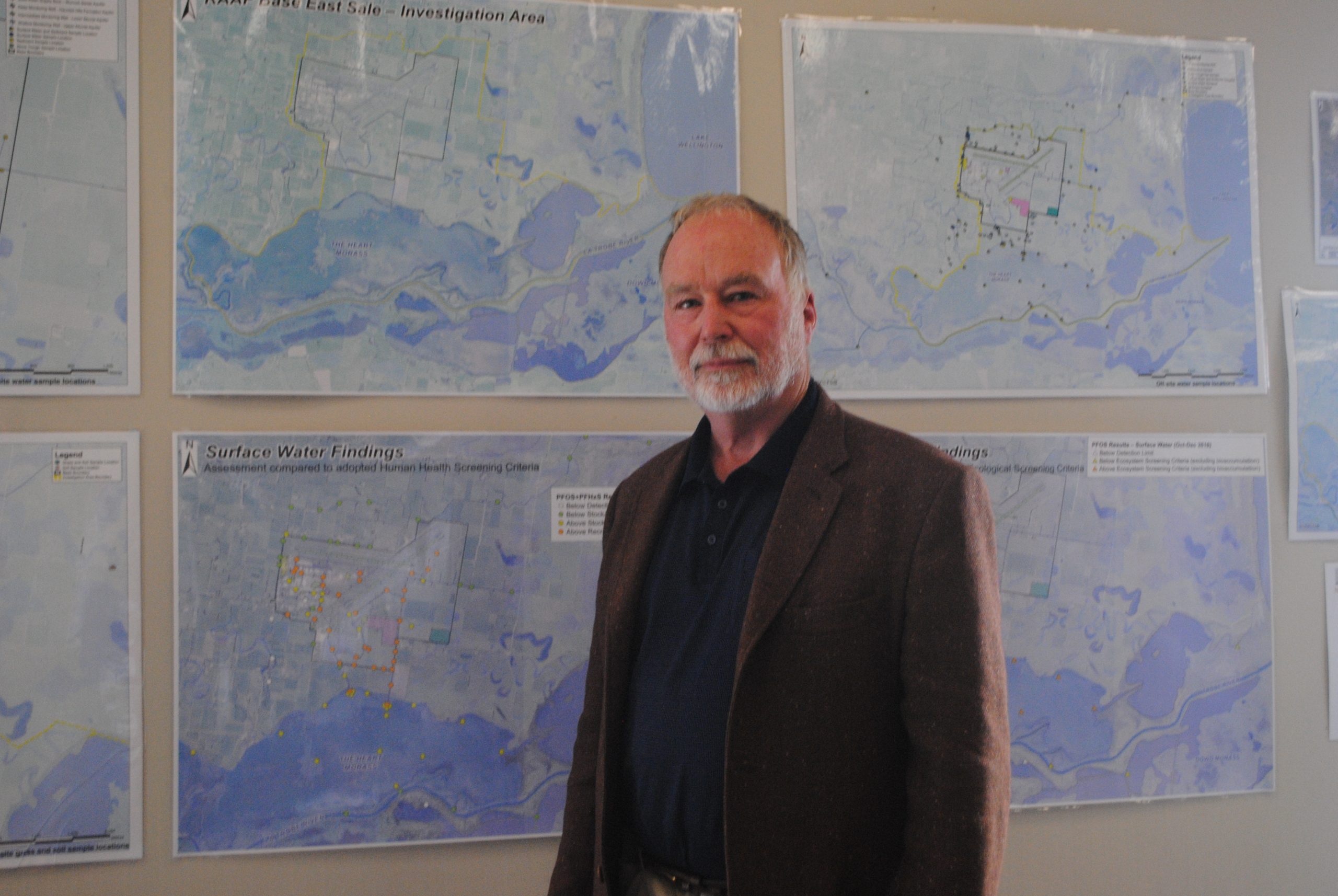 FEARS are growing that the “jurisdictional divide” between the state-based Environment Protection Authority and the Commonwealth Defence Force is delaying investigations into the potential human health effects of chemicals leaching from the RAAF Base, East Sale.

At the first of two community information sessions in Sale on Thursday, it was revealed that the EPA may not have the power to order the Defence Force to undertake more intensive investigations, such as blood tests, to discover the extent of potential contamination in people who live, work or hunt in the contamination area.

Field and Game Australia chairman Bill Paterson is calling for the free testing of shooters and hunters who use the Heart Morass, the wetlands where perand poly-fluoroalkyl substances — or PFAS — have been detected in animals, to determine whether the chemicals are in their blood.

“They have polluted our waterways, now they are potentially putting our members at risk,” he told the Gippsland Times after the session.

More than 100 samples have been taken from soil, surface and ground water, animals and sediments, with varying levels of contamination detected.

Among the highest were in fish and eels at Heart Morass, while ducks showed extremely high PFAS levels of between 100 and 1000 times the trigger point for Food Standards Australia New Zealand.

The chemicals are known to migrate through water, and while drinking water on and off-base is considered “low risk”, Defence has been unable to confirm whether bore water within the investigation area is safe to consume.

The Defence Force has said it would not extend the testing area for PFAS contamination outside of its East Sale RAAF base and the Heart Morass wetland, and that any expansion of the testing area was a matter for the EPA.

The Defence Forces’ Interim Human Health and Ecological Risk Assessment released on Friday noted the research so far could not confirm if there were potential future health effects for individuals, or whether existing health effects may be associated with people’s past exposure.

Mr Paterson said he was concerned the EPA was “not taking a hard line” with the Defence Force, despite doing so with other polluters, because of the jurisdiction divide.

In investigations of PFAS contamination in Williamtown in New South Wales, Oakey in Queensland, and Katherine in the Northern Territory, the federal government is funding voluntary blood tests for people who have lived or worked in the investigations areas.

EPA regional manager for Gippsland Stephen Lansdell said other interstate cases had involved people consuming large amounts of affected water, which was known to be a source of exposure.

He said national environment protection measures were being followed, and that more research and testing was being undertaken to understand the potential risks involved and before a strategic management plan was implemented.

The HHERA report states that there is “no consistent evidence that exposure to PFOS and PFOA [both PFAS chemicals] causes adverse human health effects”.

Despite this, local concern is building that people who live or work in the vicinity of the RAAF base investigation site may have been exposed to high levels of the PFAS chemicals.

About 70 people at Thursday’s seminar heard from Defence Force medical and environmental specialists, as well as senior EPA officers, that PFAS chemicals had a longer life in humans that in animals.

Farmers concerned about livestock biosecurity said they did not know yet if the PFAS findings had to be reported on their vendor declarations imposed by Agriculture Victoria.

“We are getting different information from different sources,” Ray Shingles said.

One audience member said the investigations were akin to the tobacco industry research of the 50s and 60s.

“Back then people were told that smoking was okay, even though there was some evidence to show that it wasn’t,” he said,

“This is the chance now to do some proper research.”

Another person asked why the RAAF was still leasing its land to stock owners, despite knowing of the potential of the contaminated land to affect animals.

There were also questions as to why no “ambient testing” had been carried out in other parts of the state to gauge the levels of PFAS chemicals in the general community, as a yardstick.

PFAS chemicals are used to make many household and industrial products that resist heat, oil, stains, grease and water, and as a result most people will have some level of the chemicals in their blood.

The chemicals were also used for many years in fire-fighting foams, and remain in the environment for a long time because they do not break down easily.

Mr Paterson said despite tests last year showing ducks, fish and eels within the Heart Morass had elevated levels in their blood, the wetlands — which are owned by Field and Game Association — were still being contaminated by run-off from the RAAF base.

“If you are found to be discharging polluting waste or run off onto a neighbouring property, the EPA will instruct you to stop immediately.

“The EPA say they are not able to do this on Commonwealth land,” he said.

“The Defence Department has done over 1,000 tests of land, water and animals in the Sale RAAF affected area in order to calculate the expected take up by humans of PFAS,” he said.

“This is a scientific ‘guestimate’.

“They have not tested a single duck hunter from the area who has been eating ducks from the Heart Morass for as long as PFAS has been used at the base.

“They refuse to do this testing, despite the fact that they have done blood tests on neighbours of three of their other contaminated sites.”

In humans, there is no consistent evidence that PFAS cause any specific illnesses, including cancer.

But the EPA has recommended that exposure to PFAS be minimised, and has advised people not to consume ducks, fish or eels from the Heart Morass until further notice.

Not long after the initial investigations were carried out last year, the EPAs executive director of knowledge, standards and assessments, Tim Eaton, said EPA Victoria could not regulate the Department of Defence.

But he said the authority would work with it “in an advisory capacity”.

Mr Paterson said he did not come away from the meeting “feeling our concerns were being addressed”.

He said Field and Game Australia, its charitable Wetlands Environmental Taskforce, volunteer members and partner organisations had worked for more than a decade to turn the Heart Morass into a thriving and important wetland.

He added its maintenance and continuation was reliant on the continuation of hunting and membership, and delays in the investigations had the potential to affect its future.

Mr Paterson described the investigations as a bureaucratic mess based on “oh well, it will take as long as it takes”.

After more testing, Defence will develop a strategic management plan to identify and address human and ecological risks identified in the investigations.