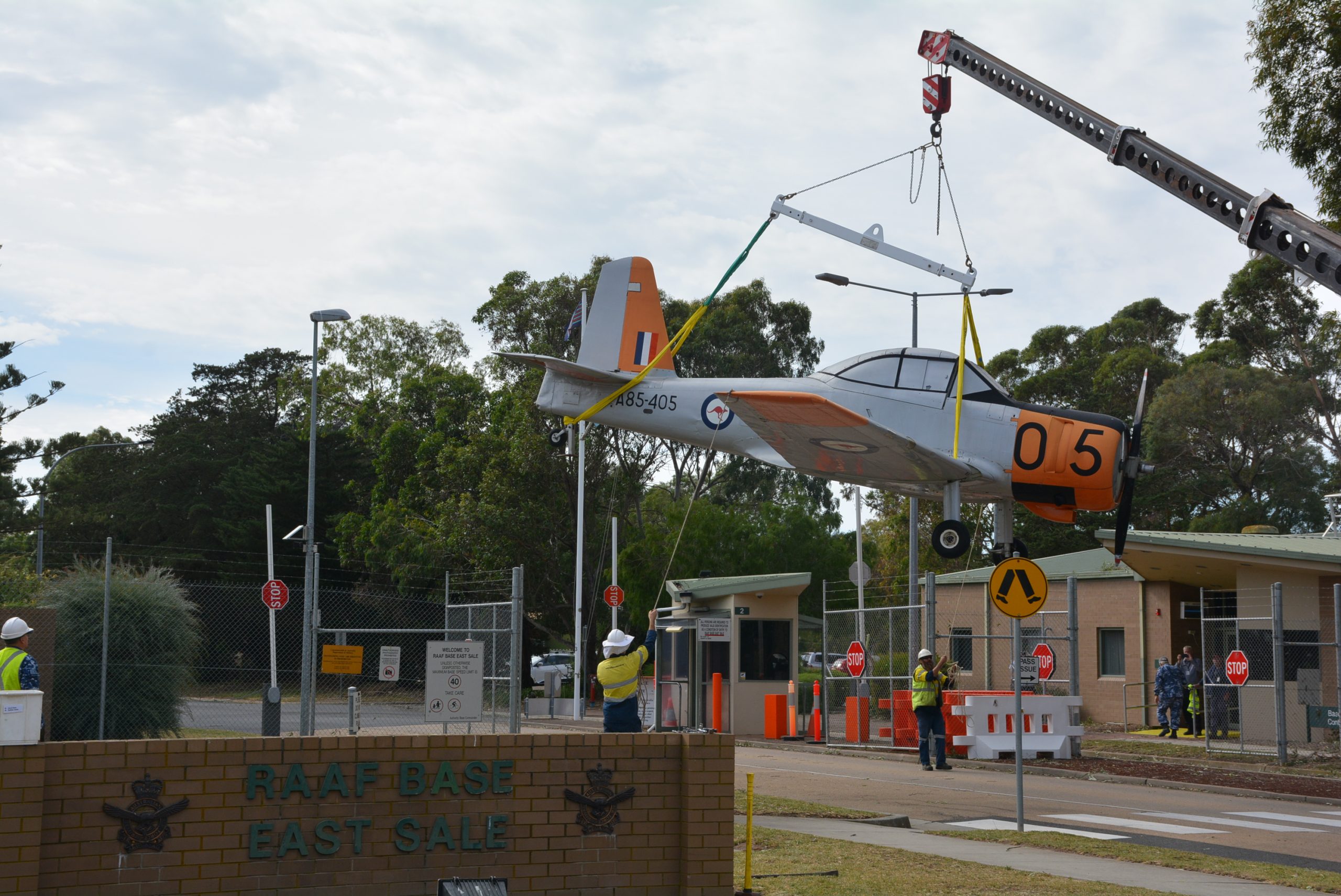 THE 1.5 tonne Winjeel training plane, which has stood outside RAAF Base, East Sale, for years, has taken flight once again.

It was craned inside the base for a full refurbishment, and will be put on display with a Macchi, which is currently being rebuilt.

The Macchi aircraft were used by Roulettes until the PC-9s took over in the late 1980s.

The delicate operation involved crowbars and sledgehammers to extract the plane from its foundations, before it was hoisted above flagpoles, power lines and light poles.

Air base executive officer, Wing Commander Marty Quirke, said the planes would be set up outside the World War 2 operations bunker, which is about 100 metres from the entrance to the base.

“We’re in talks with the Wellington Shire, it’s a collaborative project,” he said.

“The shire’s going to tie that in with other heritage sites.”

The restoration project has taken years to organise, with the Macchi sitting for five years waiting for RAAF experts to arrive in Sale.

Flight Sergeant Jeff Ryan, a veteran restorer, said Sale had finally come up as a priority base, and his team would be there for about six weeks.

“(We’re) part of the team that does the refurbishment of the gate guard aircraft we have in the country,” he said.

“We’re looking at paint stripping, repairing what needs to be repaired with the corrosion damage, weatherproofing, so sealing up all the joints, seams, opening, vents, not so we totally obliterate what it was, but to stop water getting in.”

Wing Commander Quirke added the aim was to have the planes set up by the end of the year, and have the full display ready before the Air Force centenary in 2021.

“(The Winjeel’s) been there since about 1985, and it’s the way it was — it’ll come out looking pretty schmick,” he said.

Flt Sgt Ryan noted the static aircraft displays were a good way of engaging with people outside the RAAF.

“I think it’s important,” he said.

“You only need the feedback from the public — they’re wildly impressed.

“Since we put in the F-111 (fighter jet) at Wagga, it was put on display in 2016, people are just stopping more and more to the point where the local council’s looking at putting a large lay-by to cater for the large amount of traffic.”