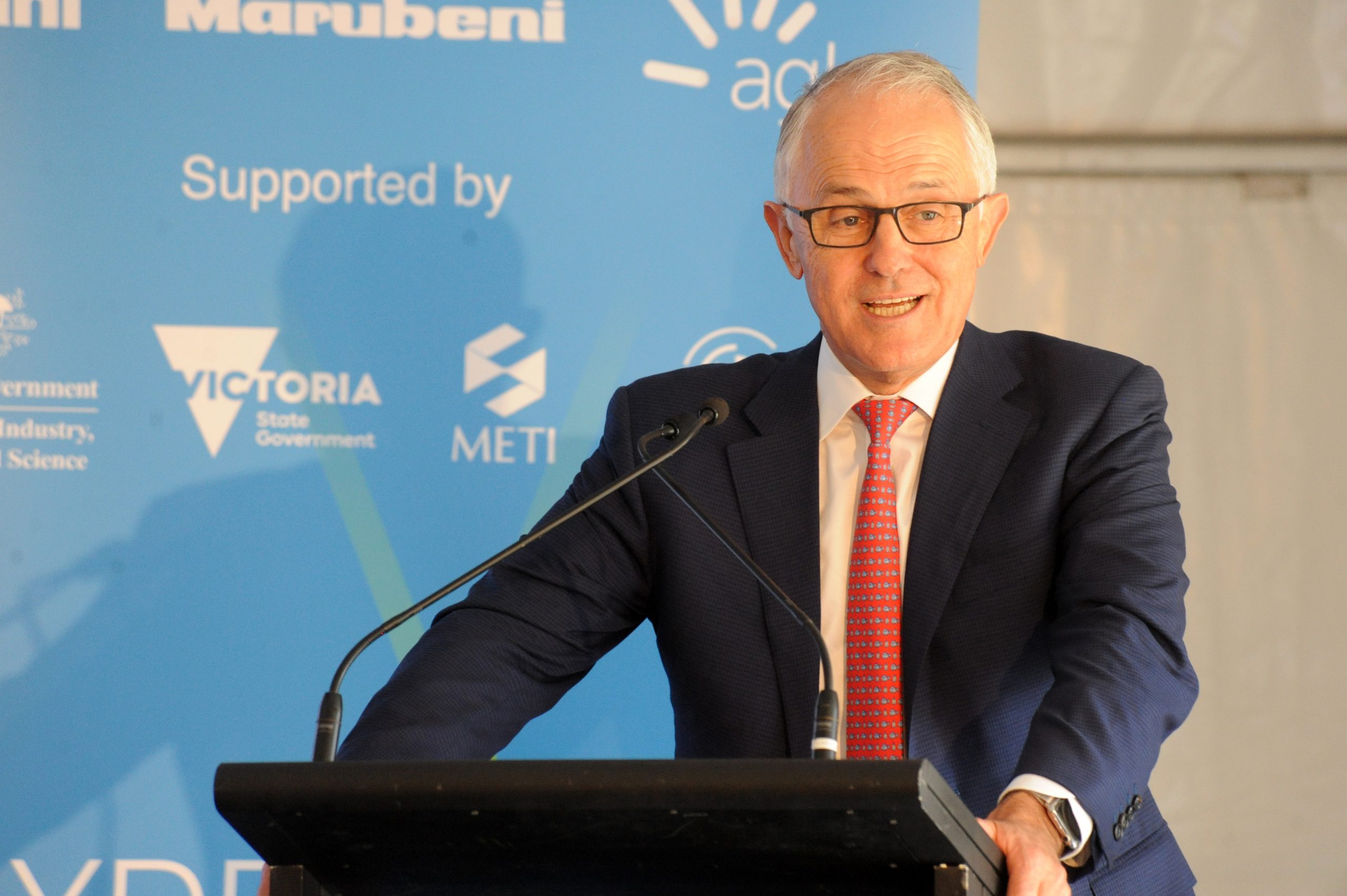 PRIME Minister Malcolm Turnbull has described a world first coal-to-hydrogen project in the Latrobe Valley as playing a critically important role as the fuel of the future.

The prime minister was at Loy Yang A power station on Thursday to launch the trial of the Hydrogen Energy Supply Chain project, in partnership with Australia and Japan.

“It is critically important we invest in the energy sources of the future and we effect the transition from old forms of [power] generation to new forms of generation, and we do this seamlessly,” Mr Turnbull said.

“Getting the transition right is critically important.”

The PM spoke in front of about 200 people including Jobs Minister Michaelia Cash, and a gathering of representatives from the Japanese consortium behind the project, which is led by Kawasaki Heavy Industries.

The HESC project will use Loy Yang coal to create low-emissions hydrogen at an adjacent site, and then transport the gas to Japan via the Port of Hastings.

Construction should begin early next year, following planning approvals, and the first hydrogen shipment is expected in 2020 to 2021.

The hydrogen will be mainly used in Japanese fuel-cell electric vehicles and power generation.

The project will create 400 jobs in its first stage, before it progresses into a commercial phase pending the success of the pilot, where it could potentially generate thousands more jobs.

If it proceeds to the commercial phase, it will use carbon capture and storage technology to sequester emissions created during the process, which would be stored in depleted gas reserves in Bass Strait.

The Victorian and federal governments will contribute $50 million each toward the half-billion dollar project.

Mr Turnbull later told the press he was “looking forward to hydrogen being used as a fuel in Australia”.

“We ship a lot of resources overseas; it gradually creates a lot of jobs. We are a trading-oriented economy. Just remember, this is 400 jobs in the Latrobe Valley,” he said.

“Australia is a trading nation, that’s why I’m fighting very hard to open up more markets for Australian exports.”

Japanese Vice-Minister for Industry Daisaku Hiraki said hydrogen had a long-term future in his nation’s energy demand in a de-carbonised society.

“Both Australia and Japan have a responsibility to make it a successful project, so we can be the driver for global initiatives towards a hydrogen-enabled society, while contributing to the world-wide response to global warming,” he said.

Environment Victoria campaigns manager Nicholas Aberle said a proposed coal-to-hydrogen plant was a long way from showing it stacked up environmentally or economically.

“It is very disappointing to see the state and federal governments each throwing $50 million of public money at the latest misguided attempt to do something with the coal under the Latrobe Valley,” Dr Aberle said.

“In 2018, using public money to prop up a project that increases our climate pollution just makes no sense.

“The Andrews government’s coal policy statement established that coal projects must be assessed transparently. There has been no public information or consultation about this project until the announcement the state government would spend $50 million on it.”