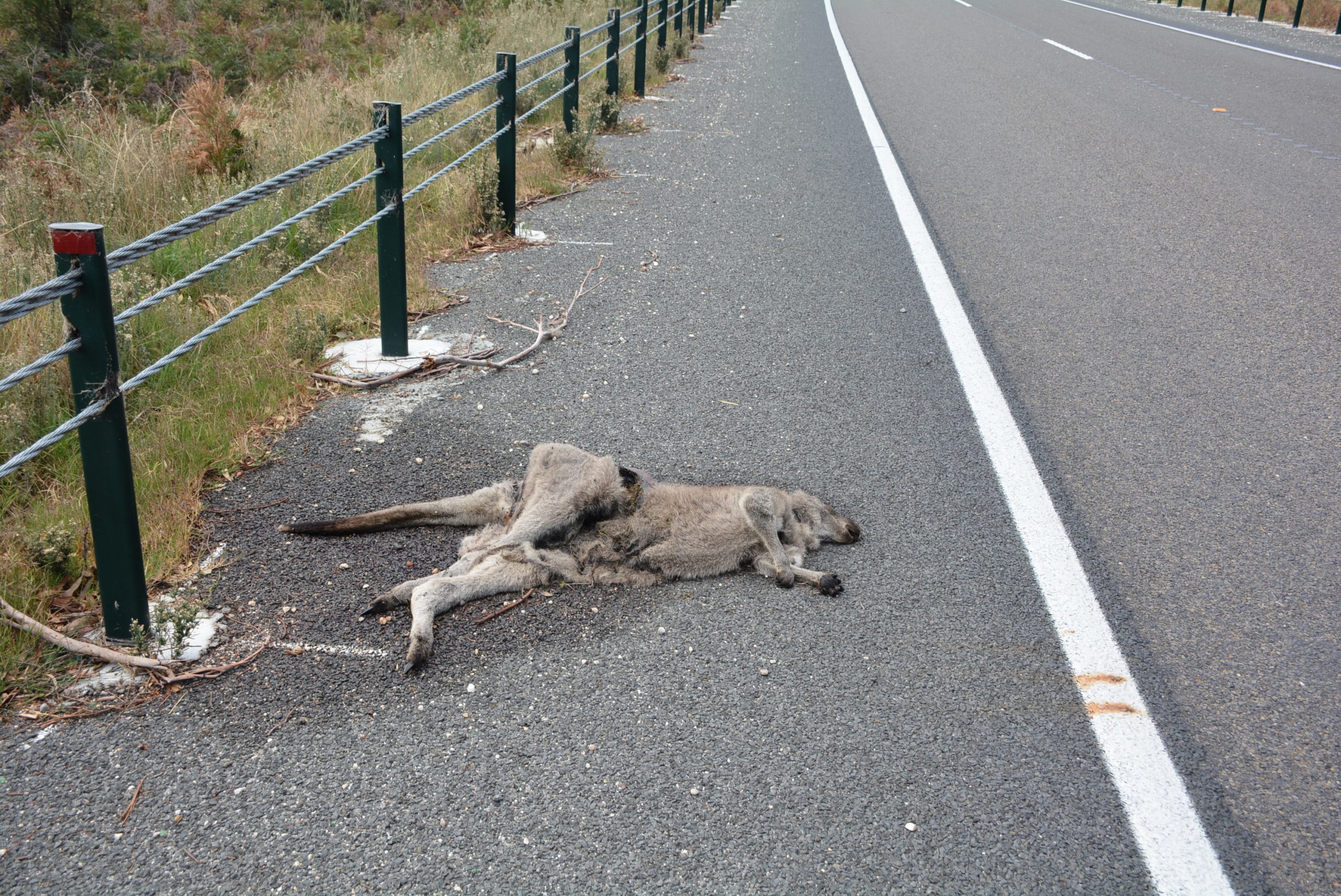 ROADSIDE barriers along the Longford-Loch Sport Rd are resulting in increased kangaroo deaths, according to locals.

Motorists are reportedly dodging, corralling and hitting dazzled and confused kangaroos trapped on the road by the newly-installed barriers at Dutson.

Locals are concerned about the safety implications the barriers have created, not just for animals but for motorists.

Theresa and Tony ‘Scruff’ Matthews, husband and wife rescue team at Our Haven Wildlife Shelter in Golden Beach, said there had been a definite increase in the number of dead kangaroos, particularly along the Dutson stretch.

“The carnage over the last holidays is the worst we have had in nine years,” Ms Matthews said.

“I have personally had them jumping down the road in front of me, trying to find a way out.

“Once they find a opening, they get off the road.”

The barriers have also made rescue attempts dangerous and unpredictable for the Matthews’, particularly as there is not enough room for the car to safely pull into the road’s shoulder.

Cars continue driving at 100 kilometres per hour, unaware that people are moving about on the roadside or that an injured and frightened kangaroo could bound back into traffic.

“People see you stopped, [but] no-one slows down,” she said.

“It’s dangerous, not only for wildlife but for anyone who breaks down — I can’t understand why they have wasted money.”

The pair spoke with police to see if they needed clearance to put a flashing light on top of their car when they are stopped, in the hopes that passing motorists would slow.

Ms Matthews said she thought holiday makers needed to be warned about the prolific wildlife in the area.

A regular user of the road, who wished to remain anonymous, is no stranger to the dangers wildlife can pose on the stretch, having hit a kangaroo on the road previously and dodged hundreds more, particularly at twilight.

He said had witnessed kangaroos bounding along the road in front of traffic, searching for openings to escape, rather than bouncing over the barriers.

“I’ve travelled that road for more than 30 years, and this is the most roadkill I’ve seen in one stretch,” he said.

“Kangaroos can be deadly if they come in through your windscreen, and anyone with a bit of local knowledge knows they’re the most dangerous thing about that road.

“[The barriers] are unsafe and unnecessary, particularly when there’s only open farmland or light scrub roadside.”

“The barriers are less than 80 centimetres high, and have been installed in accordance with VicRoads guidelines,” he said.

VicRoads Eastern Region has not received any reports or requests relating to wildlife and the barriers on Longford-Loch Sport Rd.

Because of their height, VicRoads did not expect the barriers to impede the movement of native animals, and the authority maintained the barriers had been installed at a three metre offset distance from the road, in line with its guidelines.

VicRoads re-emphasised cars leaving the road was a major cause of fatal crashes, stressing that as soon as a car left the road its trajectory became unpredictable, especially when travelling at high speeds.

VicRoads highlighted how driving out into an open paddock or down an embankment may not seem overly dangerous, but coming off the road at high speeds could cause a car to flip or roll, posing additional threats to those in the car.

The risk increases on wet surfaces or on grass or gravel where regaining traction can be difficult for inexperienced drivers, or those who have lost control of their vehicles.

“However, in accordance with VicRoads’ own guidelines, we believe that wherever possible, barriers should be set back from the road edge line by at least three metres, and should have regular breaks to allow for emergency service access,” he said.