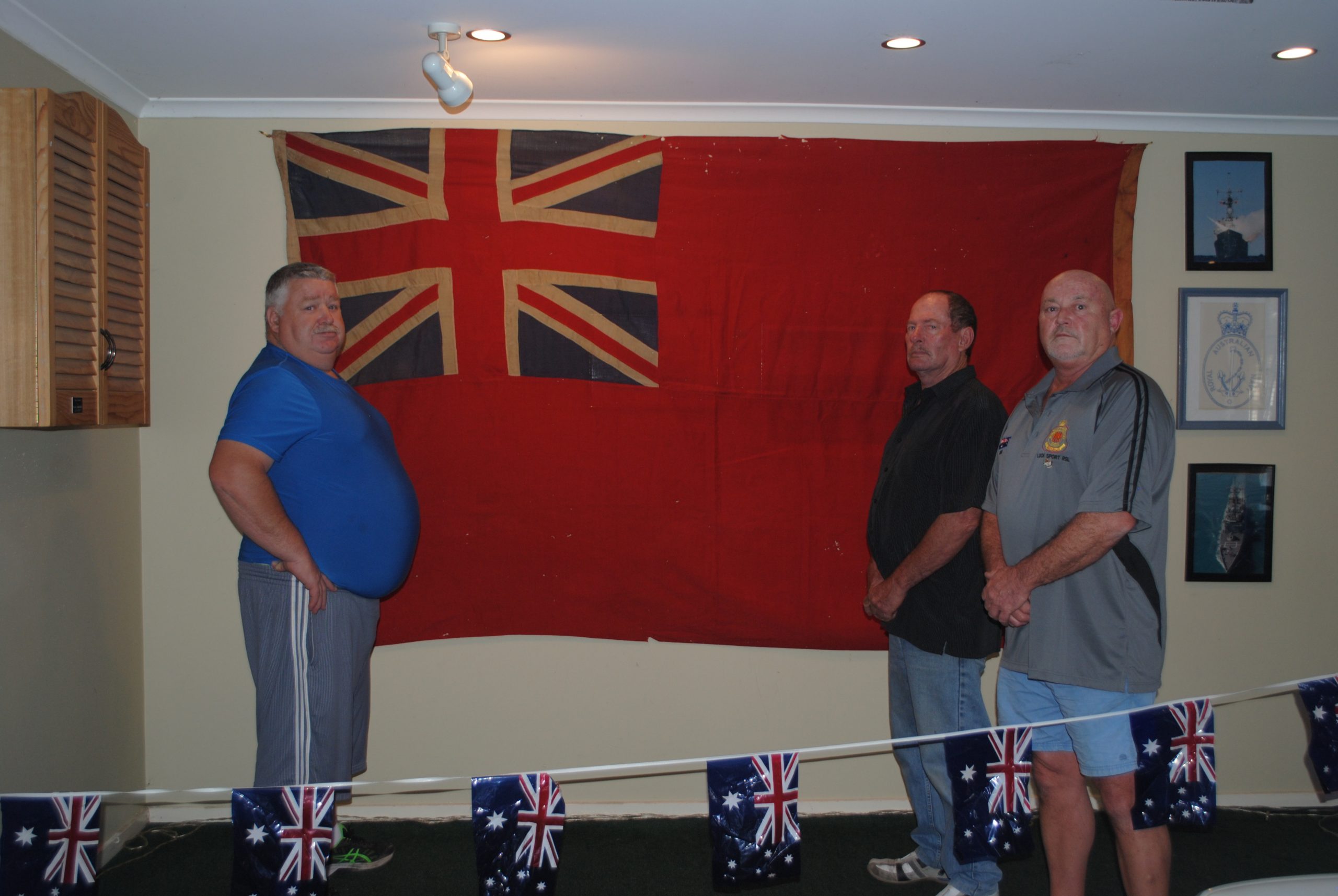 A TATTERED red flag belonging to the late grandfather of Loch Sport man Justin Renehan was the star attraction at the beach-side town’s RSL’s Anzac Day celebrations, and for very good reason.

The Red Ensign flag has a special place in the minds of many former servicemen and women — being the everyday ‘civil’ Australian flag from 1901 to 1954, until it was replaced by the Menzies government by a blue flag, a colour thought to be more representative of the times.

But political murmurs aside, Justin’s grandfather’s Red Ensign flag was a revered guest at the RSL during the Anzac week for the undeniable sense of history it carries, and the pride and respect for Diggers of the first and second world wars that it still instils.

The flag is special to Mr Renehan for several other reasons, not the least being that it is a tangible reminder of the sacrifices of his grandfather, who like thousands of others, risked his life to serve King and country.

It is also the only flag known to be taken to Gallipoli by an Australian.

The story of how the flag came home from Gallipoli is a remarkable chapter in the wartime experiences of Justin’s grandfather, Francis Renehan, who had signed up for service within two weeks of the declaration of war in August 1914.

He was given the number 396, and assigned to the 6th Battalion AIF, C Company.

Already in his 30s, Frank was older than most, but shared the same burning desire to serve his country by fighting for Britain.

Unlike many, he made it home after living through the terrifying horrors of the doomed landing at Gallipoli.

And so did his flag.

As family legend has it, Francis, or Frank as he was known, was celebrating with his unit in Cairo on Christmas Eve, in 1914, when he accepted a challenge to ‘souvenir’ a British flag suspended outside the British Headquarters, about 20 feet from the ground.

The first challenge was to get past the guards and up to the first floor and onto the balcony.

Once there, he started to crawl out on the flagstaff to unclip the chosen flag, the Red Ensign. He unclipped the first clip.

In the street, there were also a lot of Australian troops, urging Frank to drop.

Holding onto the flag, he dropped, the second clip gave way (but broke his fall) and he landed into the group of Australian troops — managed to merge in and be shepherded out with them, and with the flag.

He sprained his ankle in the drop.

Of course, the Military Police probably knew which unit was responsible — but the flag and the culprit were not found.

In November, Turkey had became an ally of Germany and the Central Powers.

The British government decided to attack Turkey at the Gallipoli Peninsula to get control of the Dardenelles, a narrow sea-way that leads from the eastern Mediterranean to the Black Sea and thence to Russia, an ally of Britain.

In preparation for the attack on Gallipoli, the troops were embarking from Egypt in late March.

Word came down the line that the soldiers’ kits were being searched.

Frank wrapped the flag around his body, and it was not discovered.

The AIF 2nd Brigade, which included the 6th Battalion, was part of the British and French attack.

The New Zealand forces were included with the AIF, and the combined Army Corps was termed ANZAC.

The Anzacs landed at a beach which thereafter was called Anzac Cove.

The other Allied forces landed at two or more points on the coast, including Cape Helles and Sulva Bay.

Beachheads were won and little else.

The attack was ultimately a failure.

Months later, back at Anzac Cove on August 7, 1915, Frank was wounded and his leg became septic.

He told his children years later that there was a dispute between two medicos regarding the necessity to cut off his leg to avoid gangrene setting in.

One was for immediate amputation; the other wanted to delay the operation until the following day.

The latter prevailed, and he kept his leg.

He was invalided out to Lemnos, one of the Greek Islands some 90 miles away.

Almost a year later, on July 13, 1916, the troops were at Pozieres, in north-west France near Amiens.

In August they were involved in heavy fighting in trenches full of mud and under deadly shelling.

They were transferred to Ypres in Belguim where they stayed till late December when they were taken out to a rest position in the rear.

Early in the new year, 1917, they were taken up to the front line again near Bullecourt, which is near Pozieres.

It was during this raid that Frank probably acquired a German officer’s field glasses — another souvenir the family still has.

About mid-year he was invalided out and remained in France until the end of November when he was sent to England for treatment for an eye injury.

Incredibly, Frank has written a short history of some of his experiences in ink on the border of the flag, but the ink is fading.

Some years ago his daughter took the flag to the La Trobe Library to get them to confirm in writing what is written on it.

The writing on the flag reads:

The flag was flown from a flag pole in the Renehen’s Camberwell garden for years every Anzac Day and Remembrance Day, and was passed to Justin’s aunt when Frank died in the 1970s.