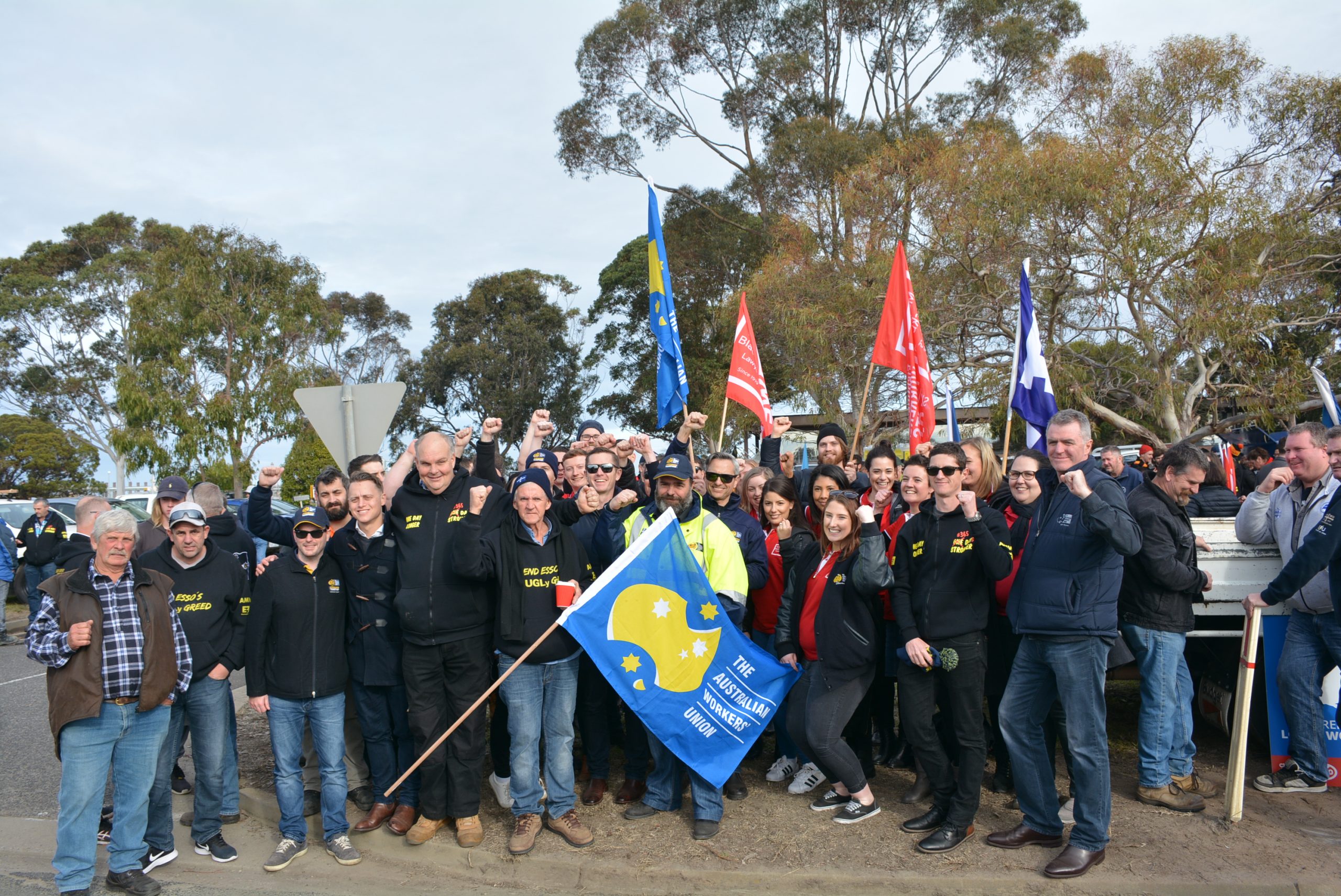 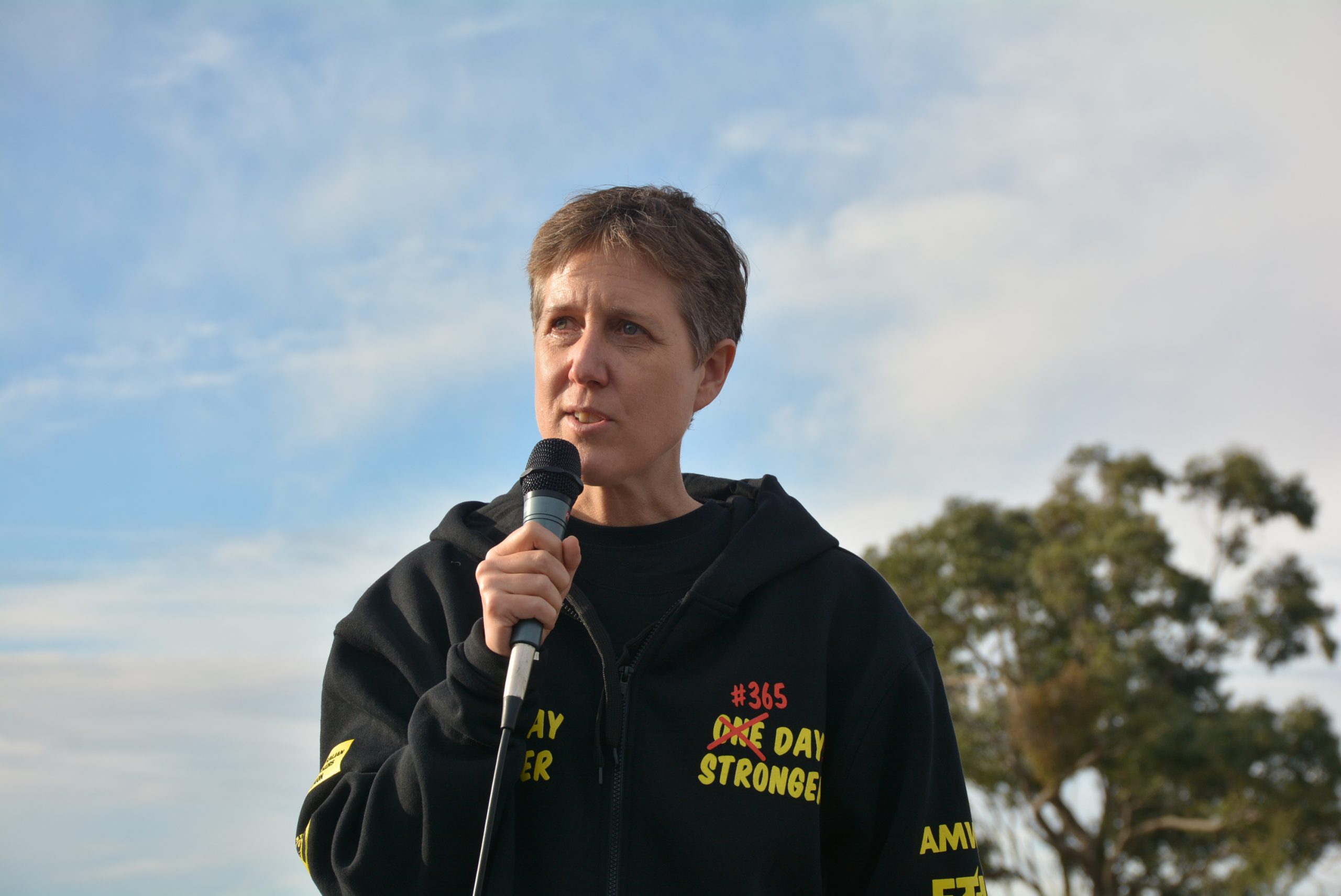 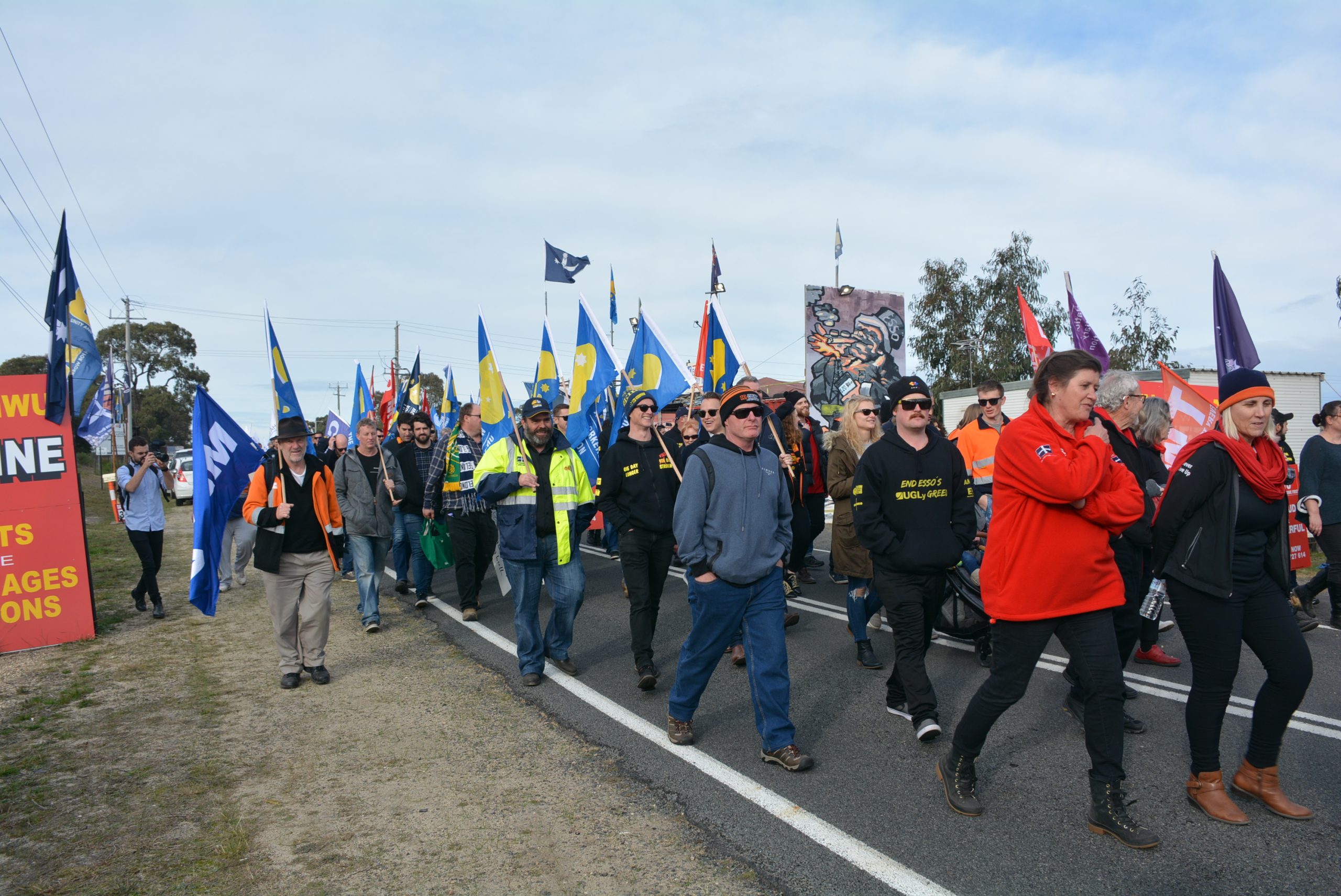 THE need to change industrial relations laws was a focus for speakers at a rally on Thursday, marking a year on the protest line at Longford, in what has become one of Australia’s longest-running disputes.

It may have been preaching to the converted, but ACTU secretary Sally McManus focused the attention of a crowd of about 500 supporters of former UGL maintenance workers at Esso’s Longford gas plant, on the need to change industrial relations laws, to outlaw the manipulation of workplace agreements to the detriment of an existing workforce.

Bus loads of supporters from Geelong, Melbourne and interstate boosted the numbers of protesters and their supporters at the rally to mark one year since Esso’s contractor UGL sacked 230 maintenance workers after they refused 30 to 40 per cent pay cuts and a new roster.

At the centre of the dispute is the right for workers to negotiate their own terms and conditions, with UGL having arranged an agreement to be voted for by five casual workers in Western Australia, and then applying it to the Victorian workforce, on a take-it-or-leave it basis.

The workers, some of whom have worked on Esso’s platforms for more than 40 years, are members of the Electrical Trades Union, Australian Manufacturing Workers’ Union and the Australian Workers’ Union.

Their dispute, which includes a round-the-clock protest outside Esso’s gas plant, is more than 365 days old, making it the longest industrial dispute in Australia for the past four decades.

The rally first assembled outside the gas plant for a lunch and heard the Victorian Trade Union Choir sing of union solidarity and strength.

Then, because the Victorian Supreme Court has prevented unionists using microphones and speakers near the gas plant, the crowd marched 500 metres back toward Longford.

From the tray of a small truck, AWU secretary Ben Davis asked how a dispute could go on for 12 months without third party intervention from a regulator.

“Two hundred and thirty maintenance workers had to go on strike for a year just to keep the conditions they already had,” he said.

“Not to get a pay rise, not to get improvements, but to keep what they have spent 30 years building and bargaining for.

“That is a national disgrace.

“If ever you needed evidence the rules are broken, there it is.

“How can a federal government in good conscience allow the seventh richest company in the world to pay less tax than I paid on my coffee this morning, and allow 230 workers to stay out on the grass for 12 months?

“Two months into this dispute the Supreme Court, in its wisdom, told us we had to get rid of Scabby the Rat.

“Our inflatable toy was somehow so intimidating, that it scared the scabs.

“We got told we couldn’t use speakers because we had a few choice messages running on loop.

“So how is that the Australian industrial laws are so restrictive towards people’s right to strike … but at no point do those laws tell Esso and UGL to pay up what they should?”

Mr Davis finished by pointing out such a scenario could be played out elsewhere.

ETU state secretary Troy Gray said the protest was the longest picket line in his experience, and had gathered support nationwide.

“There is a message to Exxon.

“You need to fix it, and fix it today.

“If there is any company in Australia that can afford these rates of pay, it’s Esso.

“They pay virtually no tax and they are one of the world’s most profitable companies.”

“When earthquakes happen they don’t just come out of the blue, they don’t happen without warning, they happen after years and years of pressure and build up and jolts,” she said.

“I’ll tell you what you have achieved.

“You have taken the issue of corporate tax avoidance to another level.

“You have put it on the national agenda, you have taken it to Canberra.

“At every single place I go to and talk about Exonn-Mobil, everyone boos.

“That would not have happened if were not for your bravery, your courage and your principles and the other thing you have done is you have taken the Change the Rules Campaign to another level.

“Because of your brave steps, it’s meant the issues of not being able to negotiate with the real decision maker — in the end its Exxon who makes the decisions — the issue of the dodgy EBA is now a national issue,” she said.

“It’s meant one political party has made commitments to stopping that.

“The fact the independent umpire cannot even intervene is a huge issue, as is the right to strike.

“For one year people in this region have been standing up to a brutal multi-national corporation that has too much power,” Ms McManus said.

“They have endured a year of struggle.

“They’ve paid a huge price for standing up against injustice.

“But they have stood firm,” she said.

“People in this community are a vital part of the movement to change the rules so we can have fair pay and more secure jobs.

“We can and will change the rules so that companies like Esso, UGL and ExxonMobil can no longer cut people’s pay, fire people and force people into unfair and insecure work.”

Shadow Assistant Minister for Workplace Relations and Rural and Regional Australia, Lisa Chesters, told the rally the sacked workers were highly skilled people who repaired the scaffolding, the rigging and the cranes, and were the people who made sure that the gas supplies reliably flowed to Victoria and south eastern Australia.

“Labor believes that collective bargaining should not be able to be undermined by sham enterprise agreements, which is exactly what has happened here.

“ExxonMobil and contractor UGL, attempted to rehire 200 workers at a 30 per cent pay cut.

“Because these workers said no, they have now been out of work for 12 months.”

“A Shorten Labor government will change the law to end this corporate gaming of the Fair Work Act.

“Malcolm Turnbull and his Liberal government should adopt Labor’s proposal and move quickly to introduce this change to the Fair Work Act.”

Ms Chesters pointed out the same tactic of sacking workers then demanding they re-apply for their jobs at reduced wages under a ‘sham’ contract was being applied to cleaners at parliament house.

“Your fight is their fight,” she said.

“Can you imagine if we put the politicians on six months probation?

“Maybe we wouldn’t be in this mess.

“Enough is enough  — the laws need to change.”

Among those addressing the crowd was Vanessa Britton, a family member of a sacked Esso-UGL worker who argued that in Australia people should be able to have a say in how long they work for, and for what wages.

“Surely it’s our right to be treated with respect?” she said.

“Our boys work hard and safely.

“UGL won the Esso contract on the back of the hard work of my husband Mick and his workmates.

“They have given the company everything, and this is how they’re repaid.”

Former Labor candidate Darren McCubbin described the loss of income for the sacked workers as an blow to the local community’s economy, felt in local car sales and in local sporting clubs.

The Longford dispute is now the longest running dispute since the Wave Hill Walk-Off, which began in 1966 and lasted nine years.

The walk-off occurred when Aboriginal stockmen of the Gurindji people walked off the Wave Hill Station near Darwin to campaign for wage justice and protest the treatment of Aboriginal people.

Esso has repeatedly distanced itself from the dispute, saying it was a matter for UGL