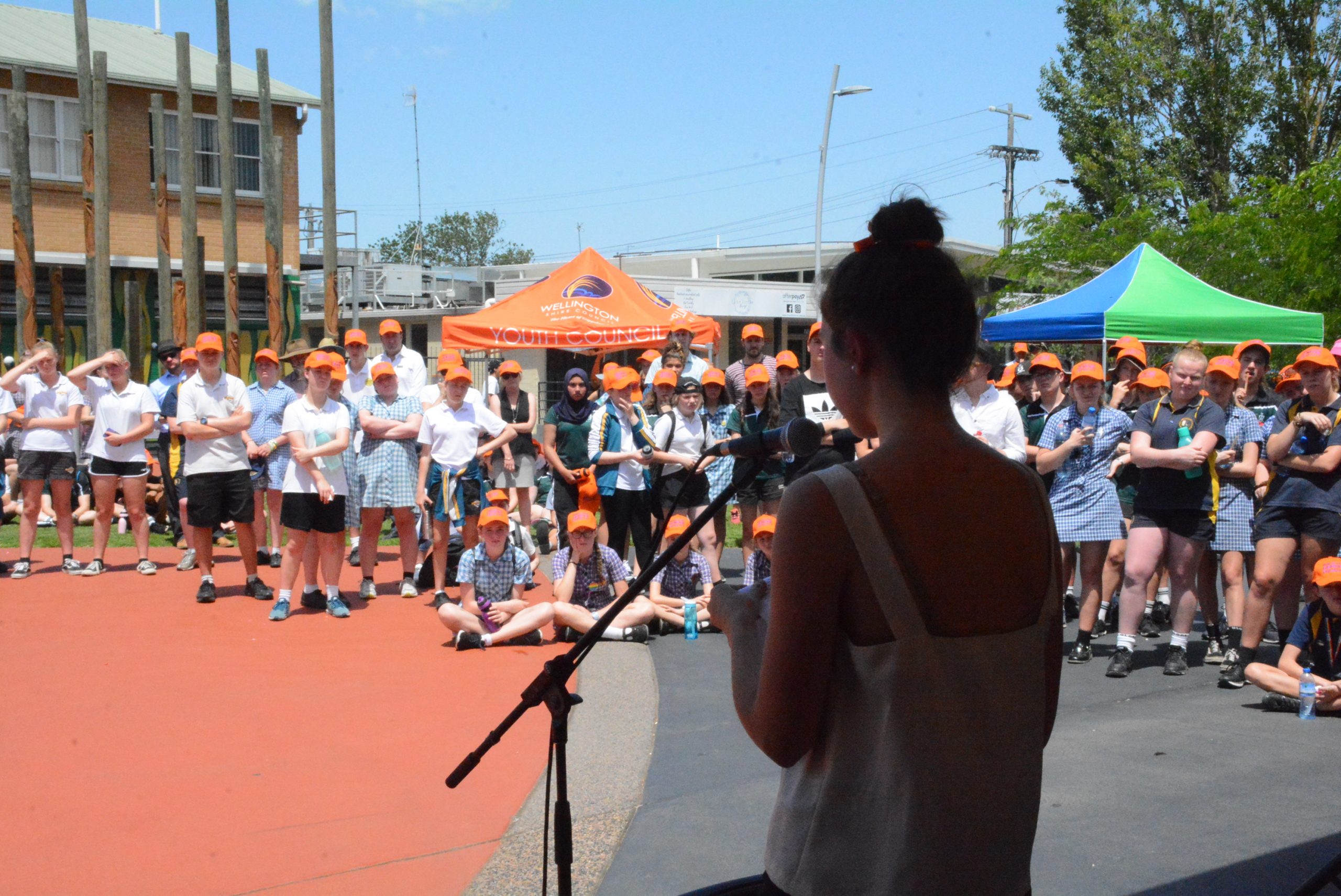 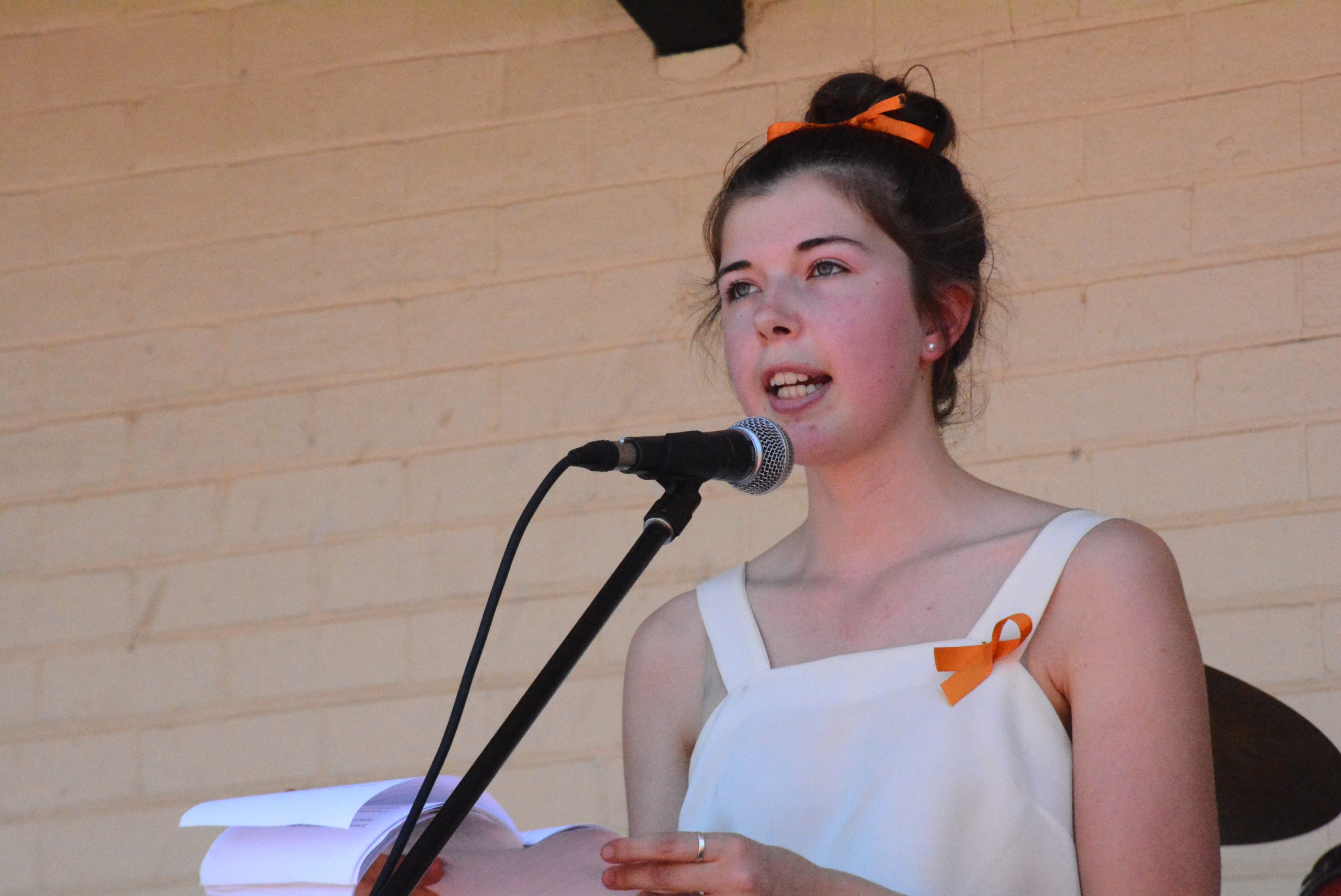 HUNDREDS of local students took to Sale’s streets on Friday to “stand up, stand strong and stand with her”.

Walking from Brennan Park to the clocktower, the school children demonstrated their commitment to addressing gender inequality, and confronted the alarming Australian statistic that one woman a week is murdered by her former or current partner — a significant social problem that is ultimately preventable.

The students were joined by other local students and community representatives as part of ‘Victoria against Violence’ and ‘16 Days of Activism against Gender Based Violence’ initiatives.

Organiser Gippsland Women’s Health has been working with Department of Education and Training, Gippsland, as part of a regional strategy to promote respectful and equal relationships.

Speaking about her own experiences with gender inequality was Leongatha Secondary College student Lizzie Harms.

Lizzie has previously spoken alongside Rosie Batty, was a featured guest speaker at the Hero Round Table event in Yarram in August, and, after solely organising the Empowering Young Women event in  Leongatha in March, engaged acclaimed Melbourne-based writer, speaker and feminist thinker Clementine Ford to address more than 400 female students from years nine to 12 about empowerment.

Lizzie said while she encouraged everyone no matter their experience or age to be an everyday gender equality activist, her advocacy was sparked by ongoing incidences of sexual harassment and inequality, including being grabbed inappropriately and punched by male classmates, and being excluded or treated differently by peers and teachers because of her gender.

“In year nine, I challenged a guy in class who said a sexist comment to his girlfriend at the time, and he slapped me forcefully across the face,” she said.

“The teacher said that she didn’t notice, because I was at the back of the row, ‘mucking around’.”

In year 10, Lizzie was harassed repeatedly, including being touched inappropriately, having photos taken of her without her permission, which were then edited and circulated, and repeated inappropriate comments.

“My self worth fell below the floor — I was only appreciated by my peers for my body, and it was as though it was theirs to own and use as they pleased.

“It happens to too many of us and far too often, and I had and still have had enough of it.”

Lizzie spoke up, but it wasn’t easy.

“What so many experience when they first speak to somebody about either harrassment or assault or rape, whether it be a teacher, a parent or another, they are interrogated with so many questions that their feelings are pushed aside, and this feeling arises that their story won’t be believed, or that they’re overreacting,” she said.

“Once the individual has spoken out, they are often watched endlessly by their peers to be caught when they falter in their endeavours in the slightest, to make them out as contradictory or untruthful — this is their way of taking back the power from the victim.

Lizzie said she identified with the one in two women who had experienced sexual harassment from the age of 15.

“From experiencing sexual harassment, I wanted to create the change,” she said.

“You need to use your voice, and when you do, you need to stand strong and endure the backlash, no matter how hard it is.

“The minute you see the seed of inequality, whether it be the tiniest joke, act on it.

“Pick up the base of the [domestic violence] pyramid — the sexiest jokes and comments — and you might just prevent a murder.”

“Men need to stop talking as though there are only two types of people in the world — those like disgraced movie mogul Harvey Weinstein and everybody else.

“My issue is when good men talk about bad men, they always ignore the line in the sand — we need to talk about how men will draw a different line for every occasion.

“It’s only good men who get to draw the line, and guess what — all men believe they are good.

“Men should start thinking about the times they’ve moved the line for their own good, or someone else’s, and women should be in control of that line.”

Mr Staples concluded that men needed to listen and read, not categorise themselves as good men or look at others as though they are bad men.

“We need to look at how we can all become better men,” he said.