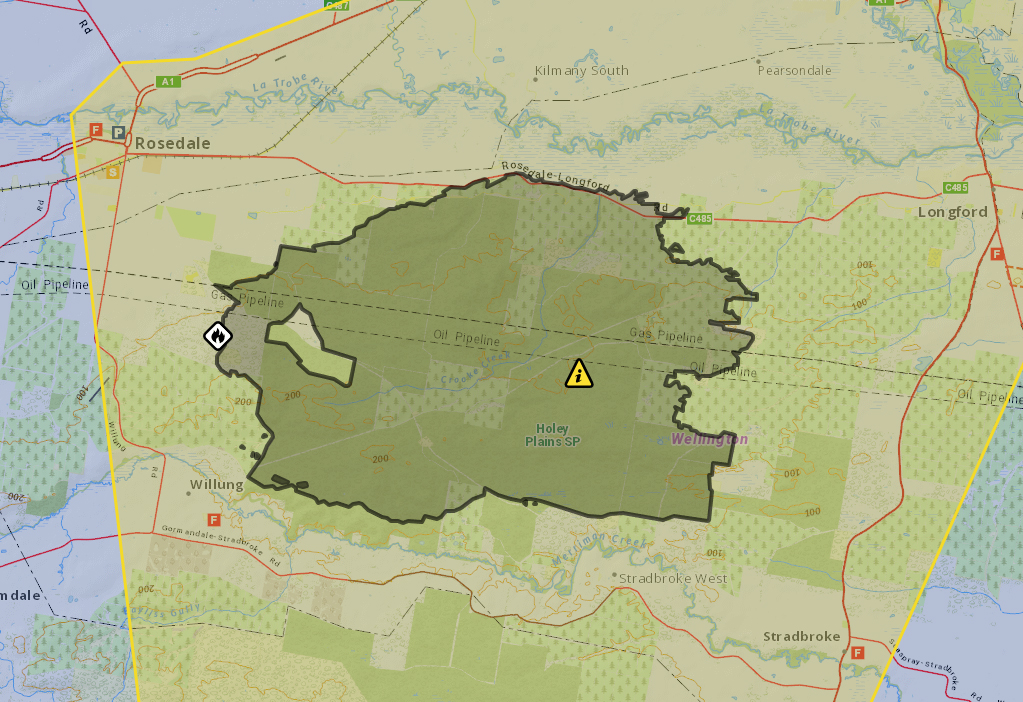 FIREFIGHTERS are hoping containment lines will hold on the Rosedale fire, with temperatures predicted to rise into the mid-30s Saturday and next week.

Crews have undertaken an enormous amount of work this week to fortify lines, taking advantage of cooler, more settled conditions to create an 82 kilometre long buffer around the fire.

Day and night shift fire line crews and incident management teams are continuing to work around the clock on the large bushfire, involving more than 300 people and additional volunteers.

At the time the Gippsland Times went to print on Thursday, firefighting officials had declared the fire contained, but not yet controlled.

No lives or homes had been lost as a result of the fire.

The perimeter was established on Tuesday, after a backburn near the Chessum Rd and Merton Vale Rd intersection, along South Boundary Track, successfully burnt out remaining fuel in the south-western corner of the fire.

The bushfire has now grown to almost 13,000 hectares, according to Incident Controller Peter West.

Mr West said there was still potential for the fire to flare in hot and windy conditions, hence it was not yet under control.

“We’ve had a couple of really difficult days, where the fire moved when we didn’t want it to, when we didn’t expect it to, and we had to react in both cases,” he said.

Mr West said with the completion of a south-west perimeter on Tuesday, monitoring the outcome of the back burn and reviewing the entire fire line, Incident Control was now in a position where it could say it had established a line around the fire.

“Right around the whole of it, we now have mineral earth up against fire edge,” he said.

Mr West stressed the importance of closely monitoring the fire, and has previously warned the fire could burn for to two to three weeks.

Peat areas have been identified, particularly in the south-east of the fire, which burn particularly hot and could result in it smouldering underground for weeks.

“This is a very big fire sitting in our landscape at the start of January — we’ve still got a month and a half or two months of the peak of summer to get through,” Mr West said.

“There’s going to be hot days ahead of ourselves, and we need to do the best we can to make sure this fire is in the best condition we can to get through some of those hot days.

“The first test of that is probably going to come this weekend.”

Next week’s weather report is predicting hotter days for Wellington Shire, with temperatures anticipated in the mid-30s.

“We’ll get through Saturday — we’ll maintain the level of resources we’ve got, but if we need to increase them, we will, and basically try and work our way through summer,” he said.

The blaze began last Friday near Rosedale when temperatures soared into the 40s, and, fanned by strong winds, the fire quickly powered through the Holey Plains State Park, threatening homes and lives.

Police are still investigating its cause.

On Wednesday, a fast moving grass fire on the outskirts of Rosedale grew to more than 11 hectares in 15 minutes on Wednesday.

Authorities say the fire was unrelated to the Rosedale bushfire, and nearby crews were able to extinguish it within minutes, with the help of two firebombing aircraft.

People are being advised to stay alert, and should stay up to date as conditions change.

The latest advice message about the Rosedale fire is available at emergency.vic.gov.au or via the VicEmergency app.

Information on the smoke and air quality is available via epa.vic.gov.au.

People who see something they believe is irregular or suspicious should phone 000 and report it to fire authorities.