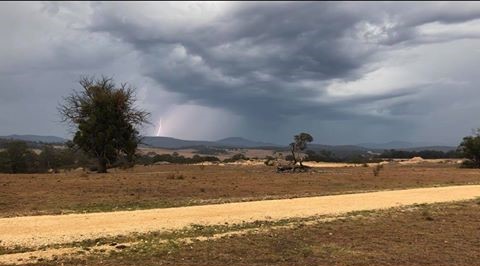 A BUSHFIRE, just under seven kilometres north east of Walhalla, was not yet under control when the Gippsland Times went to print Thursday morning.

Fire activity has since subsided and the fire was just over 100 hectares.

The fire was one of several in the Gippsland High Country sparked by lightning during Wednesday’s stormy weather.

The fire travelled in a south-easterly direction, causing VicEmergency to issue a watch and act message for Cowwarr, Cowwarr Weir, Dawson, Seaton and Toongabbie at 5.30pm on Wednesday.

At the time of publication, VicEmergency advised smoke would be visible over a large area, and ash may drop in Heyfield and surrounding communities. Firebombing aircraft are also expected in the area.

People should continue to monitor warnings, so they can act quickly if the situation changes.

To stay informed, visit www.emergency.vic.gov.au or the VicEmergency app, or tune into local radio, commercial and designated community radio stations.

For information on preparing for bushfires visit www.cfa.vic.gov.au/plan-prepare.

TWO pilots and one engineer are safe, after the aircraft they were travelling in crashed into a dam near Jericho, remote Gippsland, on Monday.

The three swam to the edge of the dam where the aircraft crashed, where Ambulance Victoria assessed the crew members.

The aircraft, one of Victoria’s fire bombing Aircranes, Christine 341, had been involved in fire suppression activities at the Thomson Catchment Complex fires.

The Aircrane was one of ten aircraft working on the fire, and is a significant asset to the state’s firefighting fleet.

Australian Transport Safety Bureau and Worksafe have been notified, and Emergency Management Commissioner Andrew Crisp said he was grateful the crew were safe.

Contingency plans are being put in place to ensure Victoria has adequate aircraft coverage over the Thomson Catchment Complex fires and for the state.