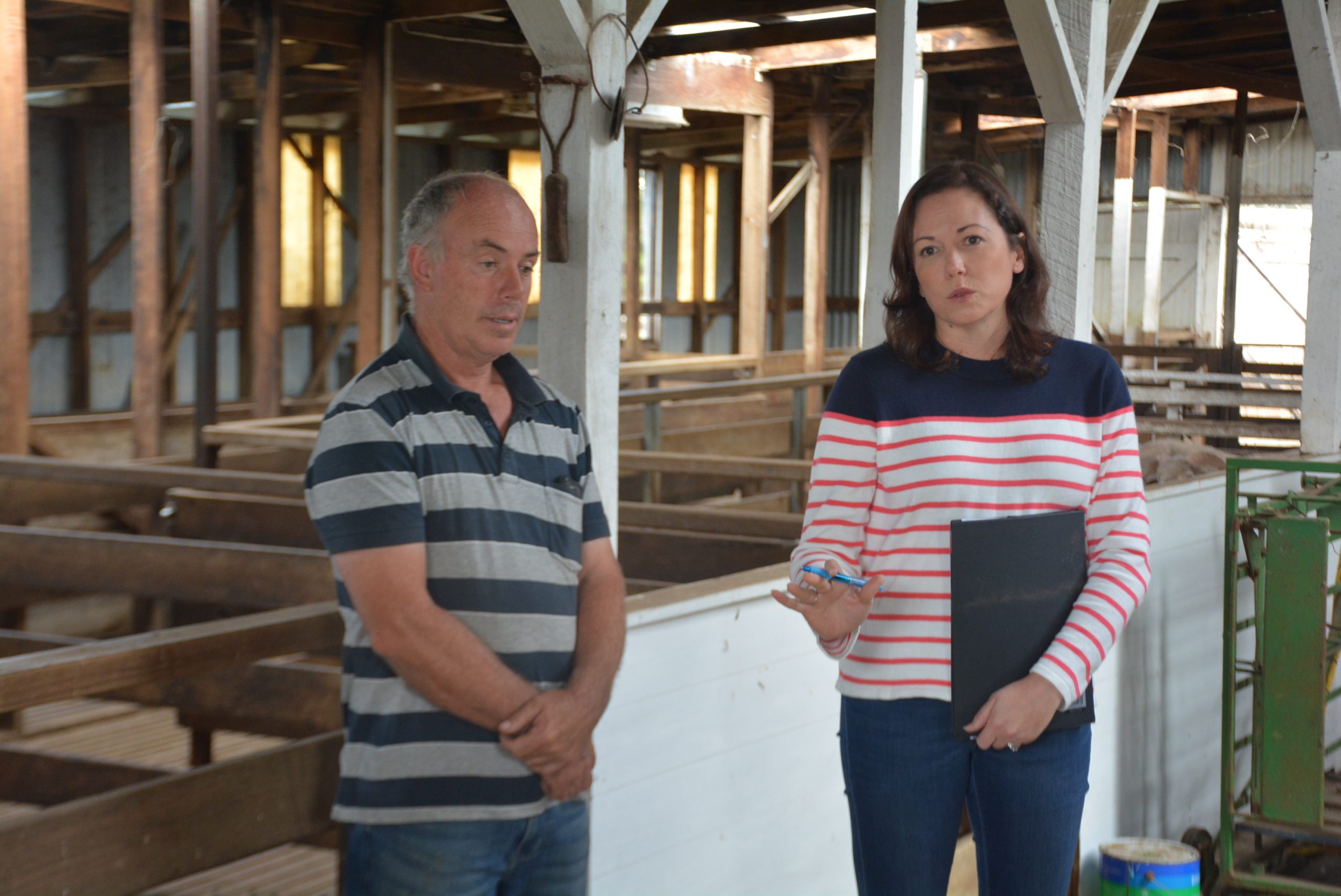 THE region’s farmers have been left crestfallen, after the state Agriculture Minister Jaclyn Symes visited Gippsland on Friday to announce a “relatively small contribution” for drought support, that excluded rate relief.

The $12.6 million package includes one-off payments for farmers in central and east Gippsland, as well as northern Victorian dairy farmers, of up to $3500 for farmers aged under 35 and those receiving the Farm Household Allowance.

Other eligible farmers are entitled to a one-off payment of up to $2500.

The package also included $1 million for the establishment of the Farm Support Fund, and a further $5 million for continuation of the On-Farm Drought Infrastructure Support Grants program.

After calling for rate relief for more than a year, the region’s farmers say the “cash injection” will do little to ease the stress of rates and monthly feed bills.

Speaking at Steve and Lisa Harrison’s Bindawarra Merino Stud based in Giffard, Ms Symes said the payments would allow farmers to put the money toward where their business pressures were.

“I acknowledge that $3500 or $2500 is a relatively small contribution to farmers’ bills, but I think it will be welcomed — it is an immediate cash injection,” she said.

“Obviously we are all hoping for an autumn break; if the rain comes, things will improve, and if it doesn’t then of course, we’ll be down talking to farmers about next measures.”

“They have announced a very substantial package of drought relief not becoming available until 2020 — I want that now, dip into your consolidated revenue, why are we waiting,” she asked.

When questioned why the Victorian government had only given $43 million in drought support funding, while the New South Wales government had pledged more than $1 billion when the Bureau of Meteorology had declared drought severity in Gippsland as similar, if not the same, to many areas of NSW, Ms Symes said they were different situations.

“Look, I really want to stay focused on Victoria, but in NSW, more than 90 per cent of the state is in drought, it has been up to eight years of drought conditions,” she said.

“I’m here to talk about the $13 million package today, which in total is a $43 million package, and also calling on the federal government to provide more funding so that we can get that to our farmers.”

Ms Symes said she expected most farmers would put the payment toward their rate bill but did not want to dictate that.

“We’ve looked at rate subsidies and the rate subsidy that we’ve balanced or used as an estimate of the average farmer’s rate bill in this area of the state — a 30 per cent average is how we’ve come up with the $2500 and $3500,” she said.

“Council rates are a matter for councils — I’ll be very clear about this.

“I don’t want any farmers missing out on how they can spend cash injections from the state government.

“I am not announcing rate subsidies today, I am not ruling it out in the future.”

When asked by the Gippsland Times when Premier Daniel Andrews will be visiting the part of the state east of Traralgon, she advised “the premier’s diary is a matter for him”.

Ms Harrison said the $2500 she would receive would be about half a week’s drought costs, and would just be swallowed up by feed costs.

“It is disappointing, and we hope that the minister, after visiting here and talking to us, realises that it’s not going to go far, and we need some more support,” she said.

“We also need to encourage farmers to help themselves a bit more, and not rely on government handouts, because they’re obviously not coming.”

Ms Harrison said the farm had been forced to destock by 60 per cent, and therefore had significantly reduced its annual income, while paying out more to keep livestock happy and healthy.

“We are containing all sheep in stock containment areas, which reduces the amount of time it takes to feed them every day, and also allows the pastures to have some recovery from the constant grazing, because there’s nothing left there,” she said.

“We have to try to maintain what little grass there is to stop all the topsoil blowing away, which has already happened.

“A lot of dams in the district have been fouled recently by all the sheep manure blowing into it and the dust, so people have actually been pumping the water out because the water was too horrible for it to be used.”

Ms Harrison said two weeks ago, they had received 20 millimetres of rain, which gave the paddocks a green tinge and filled two dams, doing a lot for morale.

“Drought is a time of decision making, and you have to be aware of what decisions you’re making and the effect it’s going to have on your stock, the water, the feed and your family,” she said.

“The fact that NSW and Queensland have got so much more support than us, it’s difficult to see what support we’re getting, and we’re in as bad conditions as what they’re in now.

“Even this time last year, we were drier than most of NSW, so that’s really hard to watch.”

“This drought has shown that it would be good if there were certain triggers that started different support levels,” she said.

“[For instance], once there were two dry seasons, then a certain level of support would be instigated, and once it reached two years dry, where it is now, the support would be escalated to a point where it’s actually going to help, rather than doing it on the run as people are asking for it.

“There should have been triggers set after the millennium drought where situations didn’t get this bad in the first place.”

Ms Harrison said she believed rate relief would have been the most equitable drought support option.

“It is a cash injection, and yes we are thankful for it, but it’s not going to go far, and we hope for more.”