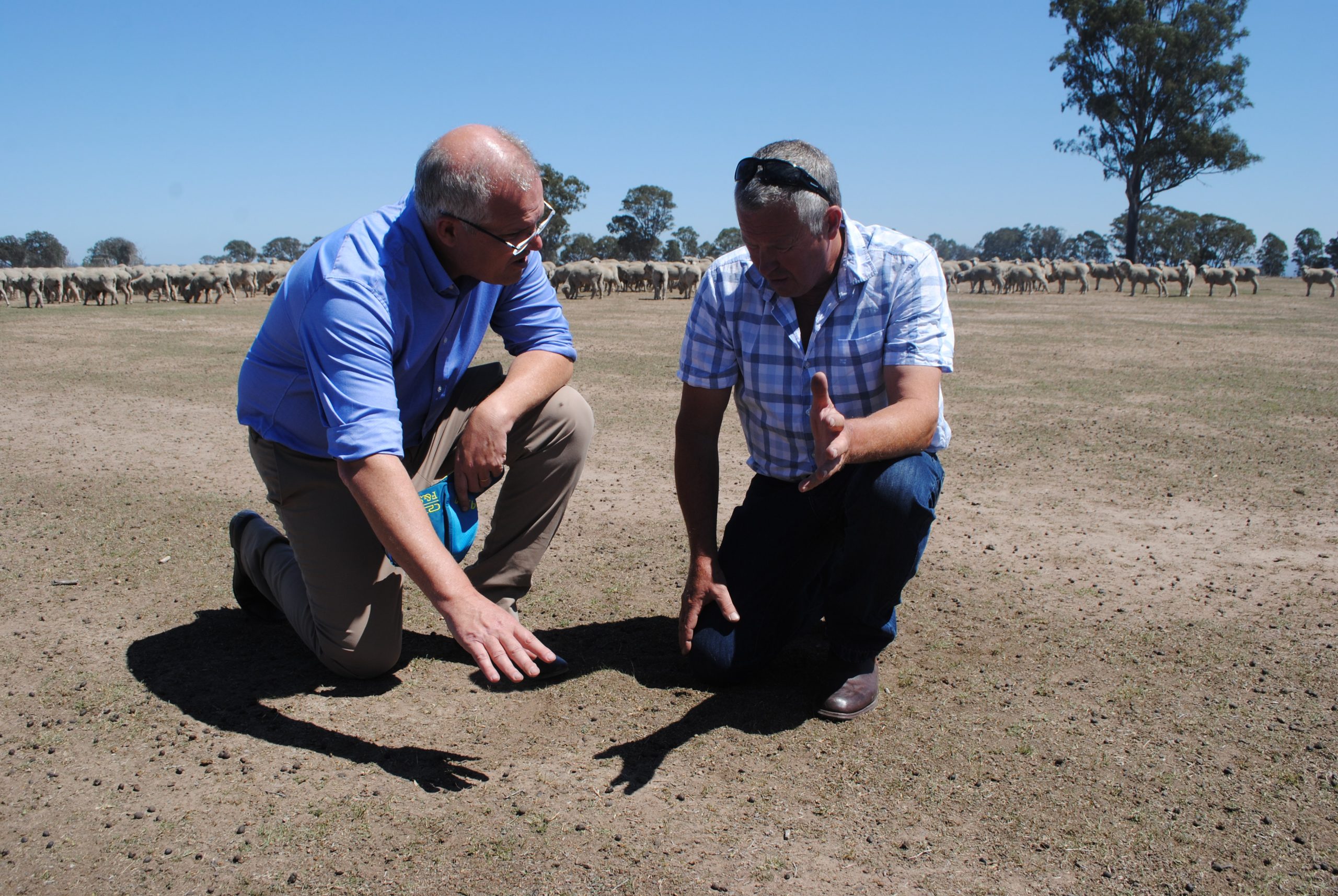 PRIME Minister Scott Morrison saw first-hand just how horrific drought conditions had become across Wellington Shire during a visit to local farms on Sunday, and announced more support was on the way to help Gippsland farmers and families cope with unprecedented conditions.

The Prime Minister said in addition to the $1 million already locked in for each of the East Gippsland and Wellington shire councils to help with local projects to boost jobs and the economy, the federal government would invest in additional mental health services and short and longer term water infrastructure for the region.

“Help is on the way for Gippsland farmers and families,” the Prime Minister said.

“I can’t make it rain, but we’re working closely with the local community to ensure the right supports are in place and that we have the water infrastructure needed for the future.

“I’ll also be meeting with the Victorian Premier to discuss what else all three levels of government can do to cooperate and get Gippsland through this drought. Like the farmers, families and businesses trying to cope with the drought across other parts of the country, supporting Gippsland is a priority for my government.”

Gippsland MHR Darren Chester said he had spent the past fortnight in Canberra, working to secure extra help for his community.

“Drought conditions across the region have worsened considerably over the past two weeks,” he said.

“The drought is having a huge social impact on communities across Gippsland in areas like Giffard, Stradbroke and McGaurans Beach, Briagolong, Bengworden and Meerlieu to Orbost, and into the high country in places like Ensay, Swifts Creek and Dargo.

Federal Agriculture and Water Resources Minister David Littleproud, who joined the Prime Minister and Mr Chester on Sunday, said the centrepiece of the government’s drought response would be the $3.9 billion Future Drought Fund, which passed the House of Representatives last week, and would provide a sustainable source of investment for climate adaptation, drought resilience, preparedness and recovery.

Minister Littleproud said Labor’s opposing of the Future Drought Fund last week made it the lowest political point of their parliament.

“For Labor to politicise the misery of Australian farmers is a new low I didn’t think even they would reach,” Minister Littleproud said.

The government has also committed $30 million for selected charities to continue their important work of supporting farmers, farm workers and farm suppliers who are facing hardship arising from drought with through cash payments and vouchers to be used to meet basic needs such as food, personal products and utility bills.

While visiting Briagolong, Mr Morrison announced the federal government would provide $31 million for the second phase of the Macalister Irrigation District modernisation project.

This phase will focus on the Newry, Boisdale and Stratford areas, with Mr Chester welcoming the funding announcement.

“This next stage of the project will complete the transformation of the Macalister Irrigation District’s ageing assets into a highly automated, efficient, modern water delivery system,” he said.

“Phase two will save and reinvest up to 10 gigalitres of water back into the rural economy, secure the Newry and Boisdale supply networks and boost Gippsland’s output of milk and food, and reduce nutrient discharges to local waterways.

“Importantly, phase two works would boost jobs during construction and create ongoing jobs as rural businesses expand. This is a significant long-term investment in Gippsland’s water  nfrastructure at a time when much of the region is in drought

“The drought is having a huge economic, social and environmental impact on our communities, some of which are enduring some of the driest conditions for a century.

“The federal government is now helping 380 farming families across Gippsland with fortnightly payments of up to $615 under the Farm Household Allowance. There are two special lump sum payments for recipients: one paid last September and the second this April of $12,000 for couples and $7200 for singles.”

The Prime Minister also announced an extra $2.5 million for mental health services would be distributed through the Gippsland Primary Health Network to help ensure farmers had someone to talk to and discuss their situation.

Under the scheme, primary producers, property owners, share farmers and lease holders in a drought-affected area can apply for a rebate for new water infrastructure for grazing livestock and to improve drought resilience.

Eligible expenses include buying and installing pipes, tanks, troughs and pumps, while 25 per cent of those expenses incurred since July can be claimed, or up to a maximum amount agreed to by the state government.

“I’ve been meeting with farmers and agricultural industry representatives across Gippsland. They’ve been telling me that one of the major issues they are facing is access to on-farm water,” Mr Chester said.

“As this drought worsens, the implementation of this scheme is becoming increasingly urgent.”

Other support available from the federal government includes $3.6 million to expand Medicare Benefit Services to enable local doctors to offer mental wellbeing support services via telehealth to rural and remote patients, and $225,000 for ReachOUT to raise awareness of counselling services in drought-affected communities.

As well as Briagolong, the Prime Minister also toured the Giffard area, where he was shown around some of the worst hit parts of Gippsland by local famer Steve Harrison, who is currently in Canberra lobbying with federal MPs.

“It obviously says a lot about the priorities of the state government when the country’s leader can make a visit out here before the state leader can,” Mr Harrison said before leaving.

Minister Littleproud responded to calls to make the 2020 Future Drought Fund immediately available, saying his team would not be shirking in its responsibility to those working on the land, and would be spending close to $7 billion to address the issue.

“We’re at a trigger point where in the northern part of the country if it doesn’t rain for six weeks basically we’re in drought for another eight to nine months,” he said.

“We’re going to continue to be agile but we’re also going to be pushing the states because it just doesn’t all come back to the Commonwealth, we’re not everyone’s ATM, we give them this thing called GST and we expect them to kick the tin as well and to support farmers just as much as we are,” Mr Littleproud said.