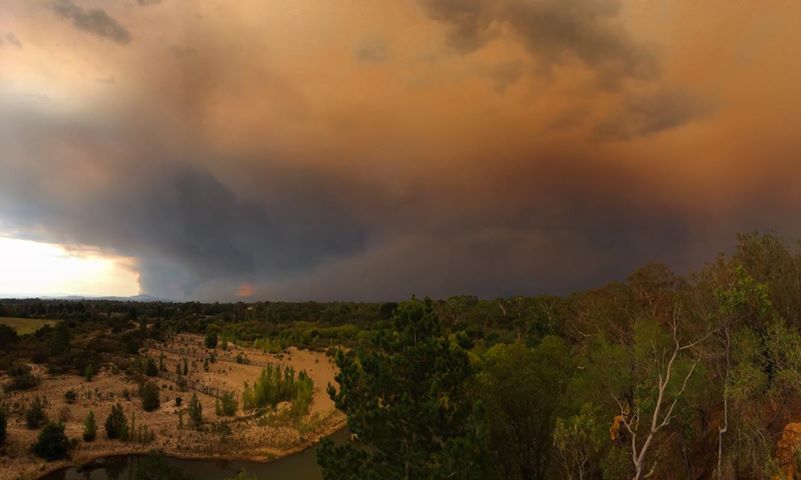 BUSHFIRES sparked by lightning are threatening homes in Wellington Shire and blanketing the region in smoke.

On Thursday night, 19 new fires started in the Macalister river area of the Gippsland High Country, sparked by lightning.

By Sunday, a day of total fire ban, the fires had escalated to emergency situations in a number of communities throughout Gippsland.

Two large air tankers have been deployed to operate out of RAAF Base, East Sale.

AN out-of-control 17,000 hectare bushfire, which began 6.5 kilometres south east of Licola, was travelling slowly in an easterly direction, and was about 15 kilometres from Valencia Creek at the time the Gippsland Times went to print on Monday morning.

The fire initially began as a cluster of fires, but had eventually joined together.

“The early predictions on this fire and the impacts its likely to have on Valencia Creek and surrounding country, is that it’ll run a bit today (Sunday), run a bit tomorrow (Monday), and maybe be on your doorstep by Tuesday,” he said.

On Saturday night, Licola was under ember attack, but no spot fires began in the town as a result of embers.

On Sunday, strong winds fanned the flames, and began producing spot fires ahead of the main fire.

By Monday morning, the fire continued to move in an easterly direction toward the Avon River.

South-easterly winds were forecast to change to the north-west on Monday afternoon, but Vic Emergency warned the variable wind conditions could produce erratic fire behaviour.

The winds were not predicted to be strong, but were expected to generate a significant amount of smoke, carrying with it embers and burnt material.

IN the shire’s north, two significant bushfires are keeping firefighting crews busy, while a number of outlying blazes have also sparked.

At the time of print, there was a major bushfire, about 1830 hectares in size, burning three kilometres north of Dargo.

The fire was not yet under control, and an Emergency Warning was issued for Black Snake Creek, Cowa, Dargo, Hawkhurst, Miowera and Peter the Swede.

Residents were told it was too late to leave, and the safest option was to take shelter indoors immediately.

At the time of print late Monday morning, the fire was spotting into dry grassland paddocks on private property.

Ground crews and heavy machinery were responding to the spot fires as quickly as they could, and significant aircraft resources had been deployed.

A 2061 hectare fire 30 kilometres north-west of Dargo was also not under control at the time of print.

An emergency warning issued for Cowa, Crooked River, Gibbs, Hawkhurst, Howittville, Miowera, Shepherdson, Talbotville, Winchester and Wongungarra on Sunday at 5.30pm, has since been downgraded to a Watch and Act.

At the time of the Watch and Act message, the bushfire was travelling in a south-easterly direction towards Howittville, and although the wind had eased and fire activity was reduced, Vic Emergency warned residents to remain vigilant of spotfires.

To the west, a fire that sparked about 40 kilometres north-west of Dargo had spread to 573 hectares in size and was burning out of control, but was not immediately threatening any townships or properties at the time of print.

Similarly, a 139 hectare fire 4.8 kilometres south of Arbuckle Junction between Buragwonduc and Rocky Knob was out of control, but not immediately threatening townships.

AT least two properties have been destroyed by the Yinnar South fire, with more expected to be discovered when crews can access areas.

The fire grew substantially on Saturday night, and VicEmergency described the blaze as “rapidly growing”.

Crews were focusing on asset protection, and there was significant spotting activity.

Power to the fire-affected area has been disrupted, and AusNet Services was assessing the situation.

WILSONS Promontory was closed Saturday, due to an 182 hectare fire, that was not yet under control at the time of print.

Residents and campers were evacuated from the area on Saturday morning because of bushfires four kilometres north of the area.

Incident controller Peter West advised that the park had been closed to protect the community, given the fire threatened the Tidal River area.

Those in boats were not able to pull up on shore either.

In Gippsland’s west, another major fire is burning out of control and has closed the Princes Highway.

At least seven properties have been destroyed by the Bunyip State Park blaze, including the Jinks Creek Winery at Tonimbuk, but that number is expected to increase dramatically.