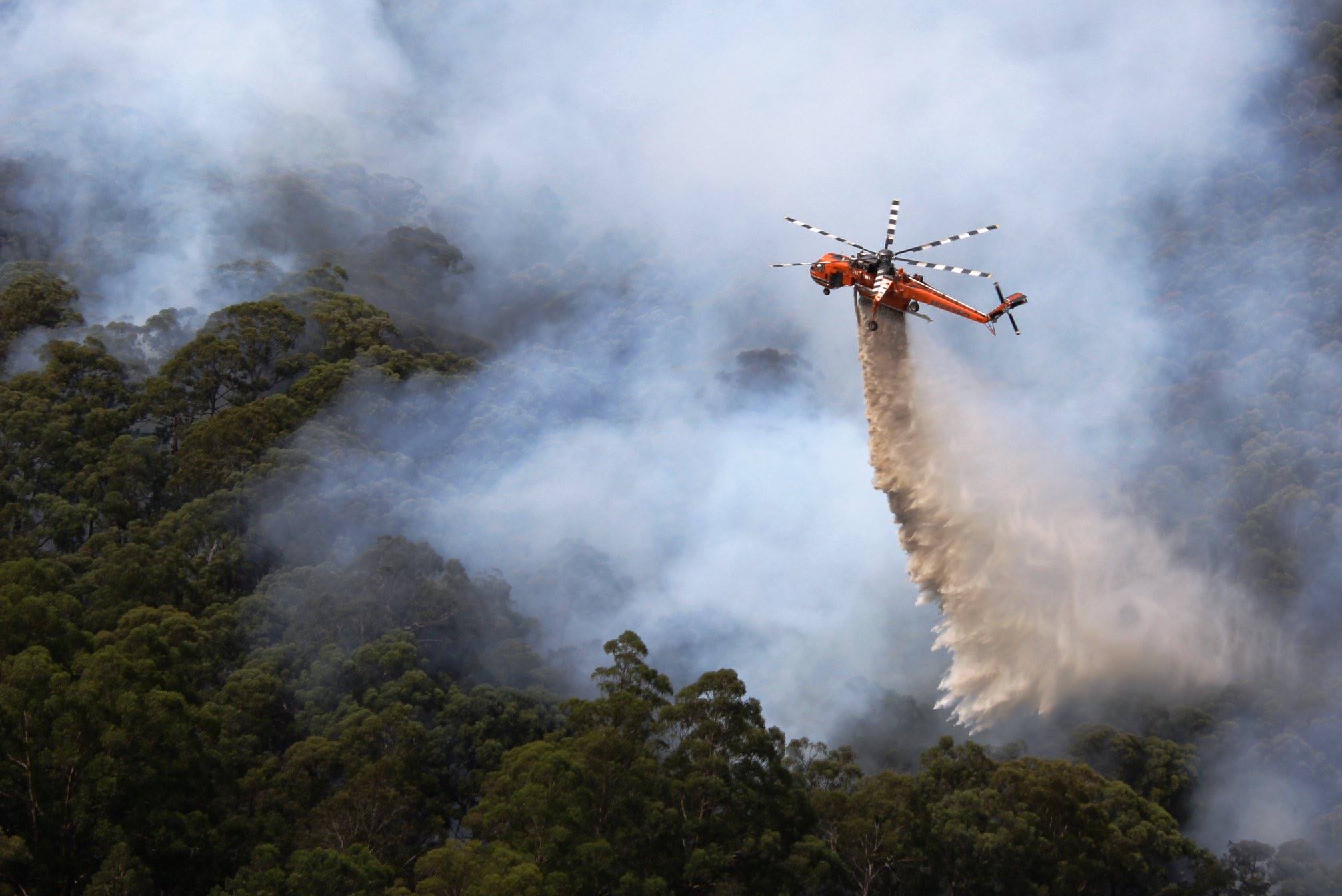 LOCAL fire warnings have been downgraded to advice messages, as fire behaviour has moderated in the past few days, but authorities are warning there is potential for it to flare again during this weekend’s warmer weather and predicted winds.

A cold front moved through Gippsland on Wednesday, dulling fire activity, but winds from the north-west are predicted for early Saturday and Sunday morning.

These winds are expected to move the Licola fire closer to Valencia Creek.

At the time the Gippsland Times went to print Thursday morning, the Licola-Mt Margaret Track fire, burning about 3.5 kilometres north-west of Valencia Creek, was about 36,000 hectares in size, but did not pose any immediate threat to life or property.

While it was not yet under control, light rain fell across the fire ground on Wednesday, aiding firefighting efforts.

A separate but substantial fire, about 23km northeast of Licola, is burning in remote public land near Mount Wellington and the Avon wilderness.

The combined fire size of the two Licola fires was about 48,771 hectares.

The focus of crews is preventing the fires spreading into communities to the south.

Regional controller Ben Rankin said the threat from these fires remained very real if there was any increase in conditions conducive to fire.

On Tuesday about noon, a strong wind change caused the Licola-Mt Margaret Track fire, which was about 17,000 hectares in size, to make a run toward Valencia Creek, as smoke engulfed most of the region.

A Watch and Act message was issued at 2.50pm from Heyfield to Munro, warning the fire was still about 14 kilometres from Valencia Creek.

Smoke began to block out light in many places across the region, causing some towns to fall into almost total darkness at 3pm.

By 4.10pm, an emergency warning was issued for Boisdale, Briagolong, Bushy Park, Llowalong, Newry, Stockdale, Tinamba West and Valencia Creek, warning the fire was now only four kilometres away, with spotfires sparking six kilometres ahead of the fire front.

A change came through about 5pm, as the temperature and wind died down, causing the fire to lose momentum.

Deputy Incident Controller Anthony Costigan warned attendees of a meeting at Briagolong Mechanics Institute on Tuesday night the threat was far from over.

“The fire will still be sitting there, when it starts to warm up Friday, Saturday and Sunday,” he said.

“When we get those north-westerly winds, it’ll start moving in towards the freehold boundary.

“Probably one of the beauties of it being so close is it might not get the intensity it would have had this afternoon [Tuesday] if it had come through to you.

“It’ll actually be a slower-moving, less intense fire with less spotting, because it hasn’t got that far to run.

“I think it’s pretty fair to say the impact zone could be anywhere from Coongulla to Boisdale or Briag.

“There’s a lot of houses in there, so you can’t guarantee you’ll get a unit or brigade or tanker turning up to help you out.”

He encouraged everyone to prepare and revise their fireplans.

“It’s a long way from over — it’s about being prepared and doing what you need to do to protect yourself,” he said.

“If your plan is to leave, then leave early.

“If you know enough to defend your properties then bunker down and defend it, but our advice to you would be to leave early.

“Don’t wait for the fire to be on your doorstep then try to think about what you’re going to do.”

There were also three fires near Dargo still not yet under control yesterday morning, and burning in remote public land in challenging terrain.

On deadline, it was anticipated the Mt Darling-Cynthia Track and the Wongungarra-Mt Darling fires would soon merge.

The combined size of the three fires is about 18,646 hectares.

The progress of these fires is being monitored by aircraft, and the focus of crews continues to be protection of the Dargo and surrounding townships.

Crews will continue to work on hotspots for some time, and, when conditions allow, aircraft will re-commence water bombing in the area.

The fires didn’t pose any immediate threat to human life and property at the time of print.

Dargo and surrounding areas have suffered through emergency warnings on consecutive days since the blaze sparked, finally gaining some reprieve on Wednesday, as light rain fell across the fire ground.

Mr Rankin said the NSW crews were a welcome addition to the fire fighting capacity across the region.

By Wednesday morning, all but one of the fires was contained. There remains one going fire 20km north-east of Orbost. All fires were contained to less than five hectares or single trees.

Twelve fires are still listed as going across the region.

VicRoads has reopened the Princes Highway between Warragul and Pakenham, but a 40kph speed restriction is in place between Tynong Rd and Tonimbuk Rd to ensure the safety of motorists.

The community is reminded to stay informed and seek information from a range of trusted sources including the Vic Emergency App and emergency broadcasters.

To keep up to date on wind changes, visit www.bom.gov.au/australia/meteye/ and search for ‘Valencia Creek’.