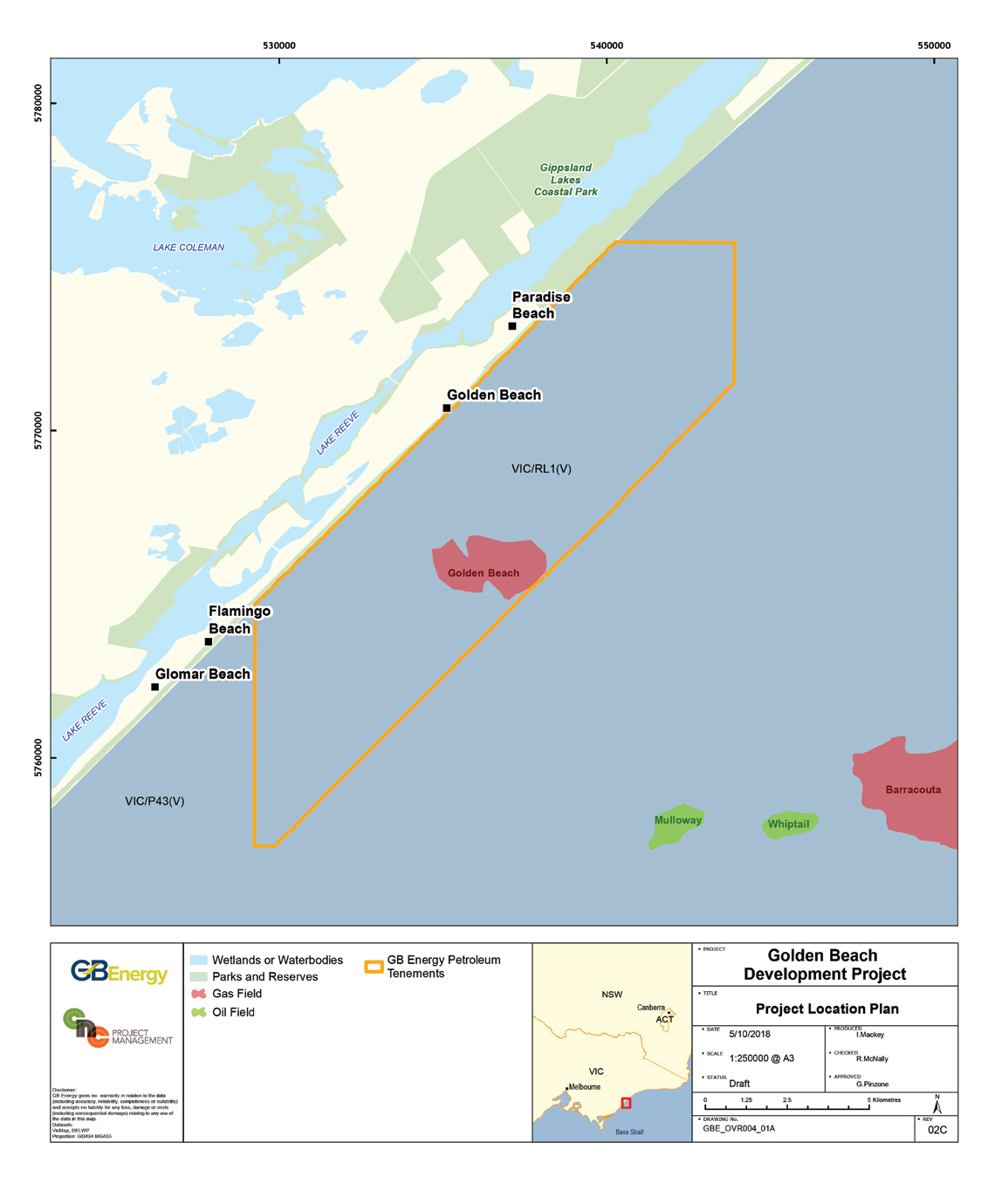 THE 90 Mile Beach land debacle of the 1960s and ’70s, where controversial zoning changes prevented development in some of Wellington Shire’s coastal areas, has put the brakes on a major gas project.

GB Energy, which runs the Golden Beach Gas Project, is seeking landowner consent for access to lots at Golden Beach to undertake environmental and other studies along the proposed pipeline route from south of Golden Beach to the Longford area.

But because many lots within the survey area have either been abandoned over the years, or the ownership details are difficult to locate, consent from all landholders has been delayed.

Where landowners can’t be located, GB Energy will need to lodge a Notice of Application for Ministerial Consent to enter land for the purpose of survey.

The Golden Beach project is in early development stages, but once surveys and geo-technical studies are completed, an onshore pipeline is expected to be built.

The company has stated it will deal “with all impacted stakeholders in an open and respectful manner to provide fair, adequate and equitable compensation in reaching agreement on a pipeline corridor”.

Pipeline construction, when all approvals have been secured, is not expected to be undertaken until later in 2020.

A GB Energy spokesman said the company had been working with the council to contact landowners in the undeveloped subdivision, and with its help had sent out nearly 200 notices seeking their consent.

“Unfortunately, over the years, contact details for owners of this undeveloped land has been extremely difficult to find,” he said.

He said of those the company had located, no-one had declined access for the survey work.

Discovered in 1967, the gas field off Golden Beach has not been developed to date because of its size and ‘dry’ gas specification (the field contains no oil or gas liquids, common in Gippsland gas fields).

It was acquired by GB Energy in May 2018, and in February this year Origin signed an agreement with GB Energy to buy all natural gas produced from the Golden Beach field.

The spokesman said the proposed Golden Beach Gas Project had achieved a number of key regulatory milestones as it moved towards delivering gas into the Victorian domestic market.

It has created significant interest in the shire’s coastal communities, with 44 people attending a community meeting at Golden Beach Bowling Club on May 25 to hear an update on project activities.

The project’s third community meeting was told the project’s pipeline consultation plan was approved by the government in January, allowing commencement of discussions with landowners along the proposed onshore pipeline route from Golden Beach to Longford.

In other developments, the project secured regulatory approval for its environmental plan in March for a near-shore geo-technical and geophysical program.

The Golden Beach gas field is over an area about three to five kilometres offshore from the 90 Mile Beach, south of Golden Beach.

The geo-physical work will require some low-intensity seismic work over an area of about four square kilometres.

It will take two vessels about two weeks to complete, weather permitting, later this year.

The geo-technical program will also include some coring work along the proposed sub-sea pipeline route to shore, involving up to four bore holes to test seabed geological characteristics.

Other offshore work, including the drilling of two production wells, will be subject to securing additional approvals and the availability of a suitable rig drill.

Currently, this offshore work is not expected to be undertaken until later in 2020.

The spokesman said the commitment by Origin Energy to buy the gas and the ongoing gas storage services allowed GB Energy to focus on the delivery of a facility “that will provide substantial flexibility to the Victorian energy market”.

The Golden Beach gas field is about 600m beneath the sea-bed, and the project involves the development of the field with sub-sea completions and a pipeline to an onshore gas plant in the Longford area.

The project will deliver gas into the domestic market and, later, as the gas resource is drawn down, the reservoir will be used for gas storage.

In the event that a full alignment cannot be established through negotiation with landholders, GB Energy may, as a last resort, request government consent to compulsorily acquire an easement under the Pipelines Act 2005 and Land Acquisition and Compensation Act 1986.

Last year proponents told the Gippsland Times there were numerous hurdles to clear before the proposal became a reality, but it would eventually provide a first for the Victorian east coast by allowing for a reservoir for gas storage for the market, which could be drawn down during “commercially opportune periods”, which often occur at peak times in winter and summer.

They were at pains to point out this project is not part of the CarbonNet project,which is investigating the potential for establishing a commercial-scale carbon capture and storage network off Golden Beach.

The area covered by the GB Energy project is a fraction of the size of the area under investigation by CarbonNet, and at much shallower depths.

Proponents said the main opportunity for jobs will be during the pipeline construction phase, but there will also be ongoing work at the processing plant and work checking on pipelines and maintaining equipment such as compressors.

There would also be spin-off economic benefits for accommodation and meal providers, however it is unclear how many jobs would be created.