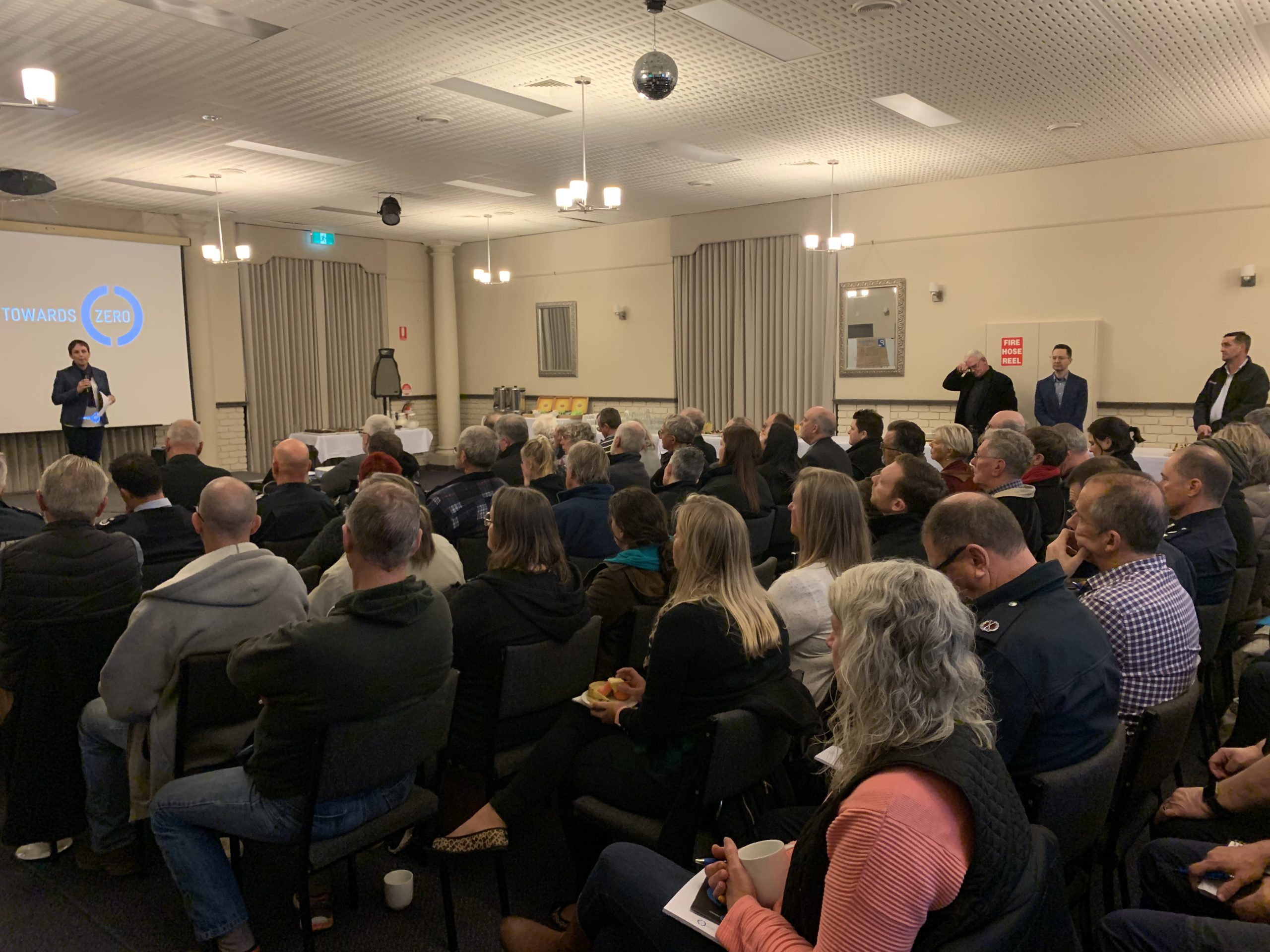 IT was standing room only at a regional road safety forum in Sale on Tuesday night, as Gippsland residents were given an opportunity to voice their opinions and concerns regarding local road safety issues.

Attended by senior emergency service representatives, road safety experts, state and local government and community group representatives, concerned residents and those touched by the road toll, the forum provided four feedback stations, where people could comment on the four areas that make up the Towards Zero strategy – safer roads, speeds, people and cars.

The most popular station by far was the ‘safer roads’ station, where people could discuss their concerns about local road infrastructure.

Barrier worries were widespread and, at times, caused tempers to flare, as locals passionately flagged their concerns.

Repeatedly, people called for centre and side barrier removal between Sale and Bairnsdale, improved criteria for the barrier placement, more areas to pull over and wider roads.

State Minister for Roads, Road Safety and the TAC Jaala Pulford was on hand to hear concerns, and said across the state, the concept of barriers was most contentious in Gippsland.

After announcing a redesign of the Princes Highway between Stratford and Bairnsdale to include eight new roadside stopping areas and less barriers, Ms Pulford said the stretch was one of 20 projects across the state, and of the 20, was likely to be the last completed because of the feedback based redesign.

“I think we have learnt, through the roll-out of the first 20, that there have been some areas where we have improved along the way – [specifically] involvement with the community in design,” she said.

“I think part of this is they look and feel quite different, but they’re sort of designed to.

Ms Pulford said the occasional breakdown or incident would be inconvenient for those caught up in it, but was only a fraction as unpleasant for someone whose husband, daughter or son wasn’t coming home.

“That is a point on which I think perhaps there might be some in the community with whom we might continue to disagree, but the evidence is really robust,” she said.

“These things are saving lives, and I have heard a couple of people tonight saying they’d like them taken down.

“The single biggest contributor to the loss of lives on our roads are high speed accidents where people run off the road, or head on collisions, and these barriers are reducing those – to get to zero [lives lost], we’ve got to do this.”

“From our statistics and overview over the last 12 months, we’ve seen a dramatic reduction in trauma being exposed to our first responders,” he said.

“The reduction of that exposure of trauma has been directly linked in most areas to the implementation of barriers – whether that’s wire ripe barriers or fixed barriers.”

“There are areas where the barriers have been hit, but had they not been there, the result would have been something very different,” he said.

Other recurrent infrastructure themes included the poor state of the Princes Highway between Sale and Stratford, with residents reporting old rumble strips in the driving lanes, potholes, uneven surface and feeling unsafe driving on the road at night.

Locals also believed VicRoads and Regional Roads Victoria needed to evaluate tbeir delivered projects and engineering standards, focus on fixing roads before moving onto other projects and admit faults instead of skirting issues.

Ms Pulford said she had arrived in Sale early specifically to travel the road to Stratford in the context in some of the feedback she received in letters from residents and conversations with Gippsland MPs.

“I can see the bit that people are rightfully pretty unhappy with, and I know that our VicRoads team are equally unhappy with that bit of pretty poor workmanship for that couple of kilometres,” shesaid.

Ms Pulford said it would be good when resealing works, scheduled for later in the year, occurred.

“We need to wait for the weather to break and then we’ll get that done, and that will be done by the end of the year,” she said.

Other problem areas included the Stratford and Fulham roundabouts, the unfinished sections of the Princes Highway duplication between Sale and Traralgon, and the Montgomery Rd intersection on the Sale-Maffra Rd.

It was also raised that when it came to road infrastructure, the community didn’t feel heard on issues previously, and were promised things that didn’t eventuate.

“Bad roads cost lives in the country and put prices up in the city,” he said.

“Too many people have died on bad country roads, and bad roads damage vehicles and loads, making farmers and country businesses less efficient, so prices go up for everything, from fruit and veg to guided tours of country attractions.”

Mr Nelson said the state government should halt the roll out of wire rope barriers and put the money into fixing rural roads, and set speed limits on a case-by-case basis, after real consultation with local road users.

At the safer vehicles station, multiple people raised the idea of completely banning mobile phone use in cars, as well as standardising headlights and indicators to exclude LED bulbs.

In regard to speed, people asked road authorities to assess roads individually when it came to speed limit reduction, rather than introducing blanket lower speeds, and making speeds more consistent, particularly in road work zones and in towns.

The state government said it will consider the community’s ideas from the summit and forums as part of the development of the next Victorian road safety strategy.

So far this year on Victorian roads, there have been 185 deaths, compared with 124 at the same time last year – an increase of 49 per cent.

Those unable to attend the forum can still give their feedback, via www.engage.vic.gov.au/towards-zero-regional-road-safety-forums.