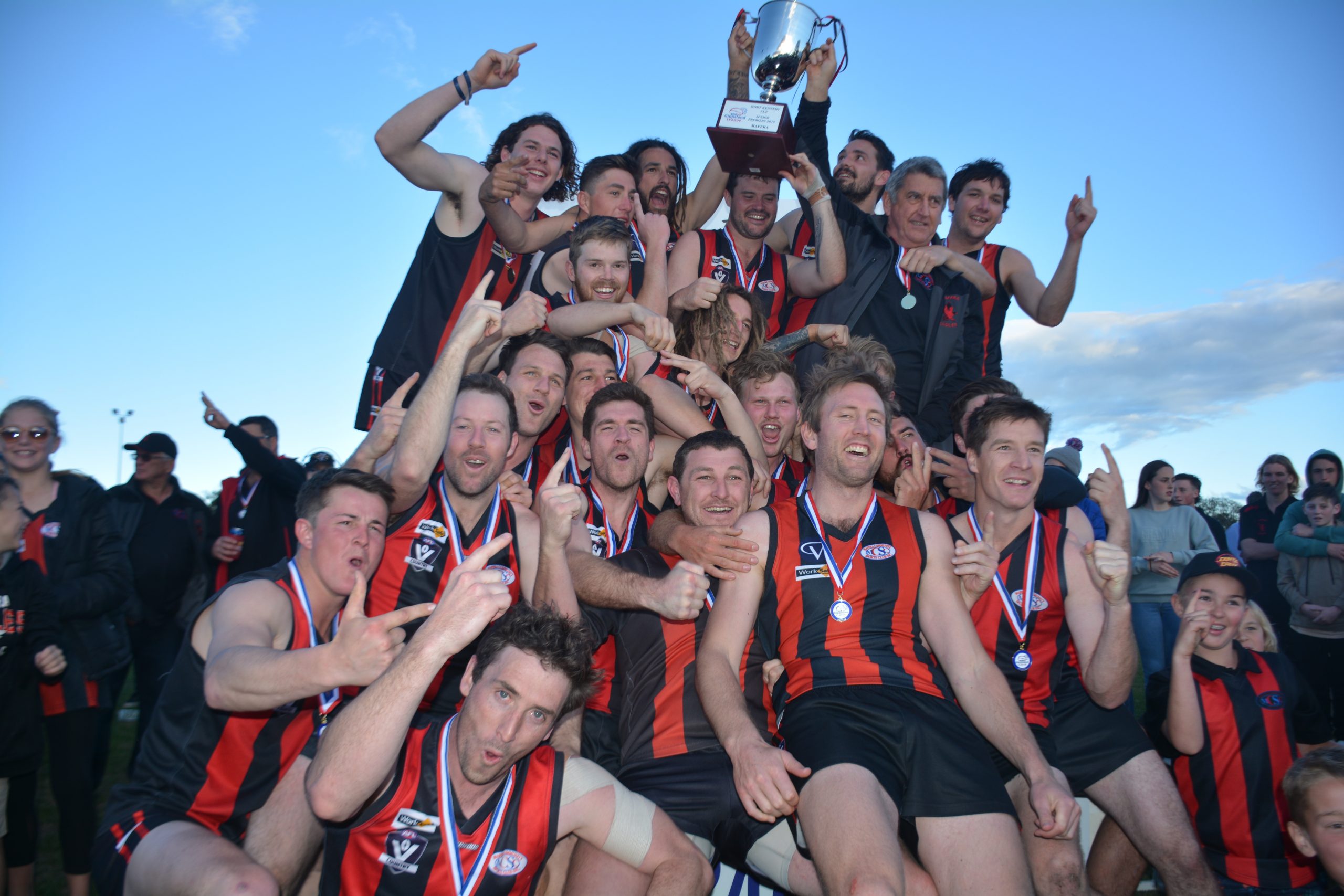 Maffra loses to Leongatha in under 18s

ANOTHER thriller was expected, and Maffra and Leongatha delivered.

The Eagles led by 15 points at three-quarter-time, but the Parrots weren’t giving up their premiership title without a fight, and the lead changed hands four times during the final term. The Eagles kicked the final two goals of the match to win 10.10 (70) to 9.8 (62) and claim its first flag since 2016.

Mitch Bennett kicked five goals for the Eagles, and was given the Stan Aitken Medal after being adjust best-on-ground by radio commentators, while John Butcher received the AFL Victoria Medal, as voted on by the umpires.

For the first time in league history, the same two clubs have contested four consecutive senior grand finals. After the Eagles won the 2016 grand final by 21 points, the next three were decided by single figure margins.

After the match, Maffra coach Wayne Butcher said the clubs each winning two grand finals was a “fitting result”, with little separating them the past four seasons.

Butcher paid tribute to his players for lifting this year, and overcoming the disappointment of losing the past two grand finals.

“We’ve lost two grand finals, it’s pretty tough to come back from that, but the boys all stuck together,” he said.

“They didn’t give in, didn’t go away, they wanted to keep going till we won another one – and we got it.

“This group is probably the greatest group I’ve ever coached.”

After pleading guilty, Johnstone was last week given a four-week suspended ban after striking a Leongatha player during the second semi-final, allowing him to play in the grand final.

However, the league appealed the penalty given by the independent tribunal. The appeal to AFL Victoria in Melbourne via videolink, began at 9am on Saturday. While the appeals panel upheld the original penalty, having the hearing hours before a big game was the last thing the Eagles wanted to contend with.

Maffra did make two changes from the side which defeated Leongatha in the second semi-final a fortnight earlier, with ruckman Kieran Jones and defender Sam Walker replacing James Whelan and Josh Davis.

The first quarter was tense, but Maffra had the better of play.

The Eagles kept the Parrots score-less in the first term, but were missing their own chances, managing six behinds.

The Parrots’ first score came after hitting the post in the second minute of the second term. Two minutes later, they kicked the first goal through Cameron Olden to take a one-point lead.

Maffra’s first goal came in the 11th minute when Danny Butcher received a 50 metre penalty. Two minutes later, the Eagles led by 12 points after a Bennett kicked his first major.

A goal from Matt Borschmann reduced the margin to five points

A late bump after Harry marked the ball led to a 50m penalty and a goal, putting the Parrots back in front heading into time-on.

Leongatha had the chance to extend its lead when a free kick was awarded in its attacking 50, but the free kick was reversed after a Parrot remonstrated. This eventually led to John Butcher taking a strong mark in front of Maffra goal, he kicked truly to put the Eagles back in front.

The Eagles led by three points after a tight first half, with their errant kicking for goal in the first term preventing a greater margin.

The Eagles began the third quarter intent on taking control of the match.

A goal from Alex Carr in the fifth minute extended Maffra’s lead to eight points, before majors from Sam Pleming and Bennett put the Eagles 20 in front within the first 10 minutes.

Cameron Stone kicked a goal for Leongatha, before Bennett made the most of a Parrot spilling the ball in defence to boot a major.

A Chris Dunne for Leongatha reduced the margin to 15 points by three-quarter-time, keeping the Parrots in the game.

Tom Marriott booted the opening goal of the final term for the Parrots, then a minute later, Olden kicked a goal to get within two points.

The Parrots had the lead when Marriot crumbed a centring kick into the goal square and booted his second major.

It took the Eagles 13 minutes to get a meaningful forward 50 entry.

Working against the flow of the match, the Eagles pushed the ball forward. In a pack of players in the goal square, Bennett managed to get his boot to the ball and give the Eagles back the lead.

Heading into time-on, Marriott got free on the changerooms wing and sent the ball forward, ending up with Josh Hopkins, who goal put the Parrots four points ahead.

The Parrots didn’t enjoy the lead for long, as Pleming rose to the occasion to kick a goal for the Eagles in the 22nd minute.

With the Eagles happy to lock down the ball, the Parrots were struggling to get the ball forward.

Somewhat fittingly, Johnstone played a role in the goal which sealed victory for the Eagles.

After the umpire ruled a Parrot didn’t take a mark in defence, Johnstone gathered the ball and handpassed to Bennett in the goal square.

After such a thrilling match, the end was anti-climatic – few heard the final siren, which was faint. Many didn’t realise the match was over until they saw John Butcher throw the ball into the air.

Forwards John Butcher, Bennett and Pleming were outstanding for the Eagles, they stood up when they were needed most.

Alex Carr and Michael Coleman took the match up to the Parrots’ strong midfield unit, setting up chances for the forwards.

James Huts was integral to an Eagles’ defence which restricted the Parrots for most of the match. Keeping the Parrots’ key forwards in check was a major factor in the result.

Tom Marriott stood-out for the Parrots in the midfield, working well with Olden, Stone, ruckman Ben Willis and Hopkins, who also contributed in attack. Colin Sanbrook did well in a Leongatha defence which was under attack.