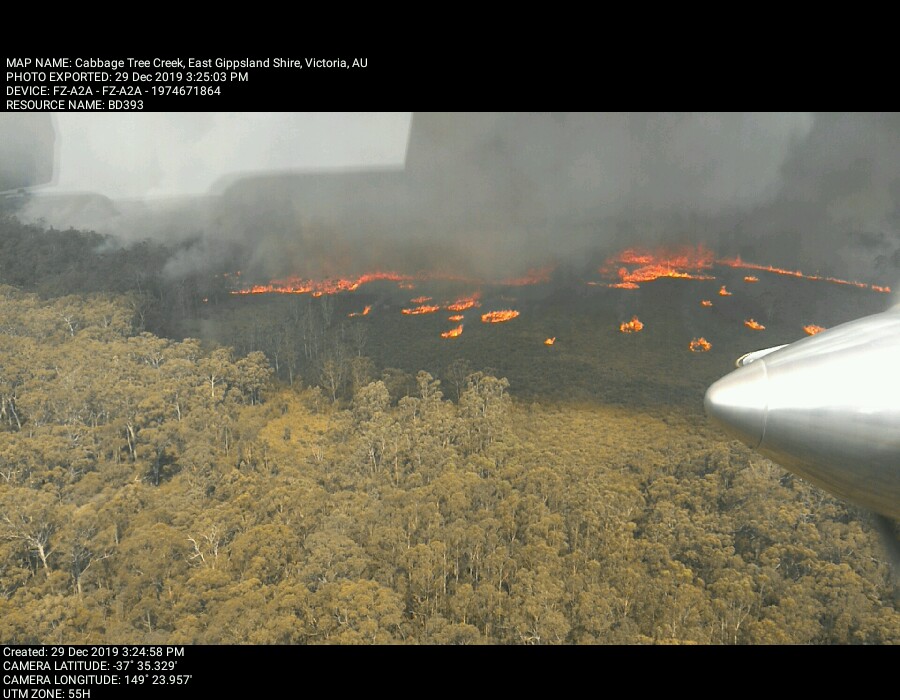 IN anticipation of conditions fire authorities describe as the worst since Black Saturday, residents and holidayers across east Gippsland were asked to “get out now” on Sunday, in an unprecedented mass evacuation.

The huge evacuation area takes in Lakes Entrance through to the New South Wales border, with many heading towards safer areas like Sale.

As Emergency Relief Centres opened their doors around Gippsland, including at Sale Baptist Church, fears the Princes Highway may be cut off were realised, when it closed in both directions between Cann River and Genoa by mid-Sunday afternoon.

It was re-opened by Monday morning, after many communities were threatened with emergency warnings overnight.

As the fire continued to build, its smoke column grew to 14,000 metres and created its own lightning, with several significant lightning strikes creating spot fires.

Dry lightning strikes across the north of Gippsland on Sunday also sparked 10 to 12 new fires in Gippsland, and several more just across the border in New South Wales, with fire authorities predicting yesterday morning fires would develop into fire fronts throughout the day.

As yesterday’s fire danger conditions shaped up to be worse than initially anticipated, Emergency Management Commissioner Andrew Crisp urged those visiting, including more than 30,000 people holidaying at Lakes Entrance alone, to “leave no later than mid-morning” on Monday.

“If you’re already visiting East Gippsland, you need to leave the area today [Sunday],” he said.

“It is not possible to provide support and aid to all the visitors currently in the east Gippsland region, and if the Princes Highway is impacted, you may not be able to leave for sometime.

“We’ve got CFA brigades down there, but on top of that, more than 300 CFA career and volunteer firefighters and more than 60 trucks have moved into that area, so we can do absolutely all we can to protect communities.

“Rest assured, there’s not enough fire trucks to go around, so don’t count on a fire truck protecting your particular house – you need to get out of there.”

Commissioner Crisp added while the state was resourced with 70 firefighting helicopters and aeroplanes, conditions may be too treacherous to fly. Bairnsdale Incident Controller Ben Rankin echoed Commissioner Crisp’s sentiments, advising people to pack up and move out, and reconsider coming back on Tuesday, after Monday’s total fire ban.

Incident Controller Rankin advised there was at least four large columns of fire across the east’s bushfires, with one up to eight kilometres high, which could spit out embers many kilometres away.

He added the weather conditions expected for Monday were more extreme than anticipated two or three days prior.

“We’re going to have conditions here on these fires over 40 degrees, a very unstable atmosphere, and wind strengths now that are predicted to be 40 to 60 kilometres [per hour], with gusts higher than that, from a north-westerly direction,” he said.

Incident Controller Rankin said anything that escaped the fires’ current perimeters could potentially run beyond the Princes Highway to the east of Bairnsdale, and to the coast near Lakes Entrance.

Ahead of a cool change expected to hit the area about midnight, severe 90 to 100kmh wind gusts were forecast for the alpine area.

The cool change brings with it an increased likelihood of thunderstorms, with lightning hitting the dry landscape, as little rain is expected.

Three fires have been burning in east Gippsland since November 21 – the Marthavale fire, the Ensay fire and the W Tree fire.

Just over a week ago, the Marthavale fire moved 25km to join up with Ensay overnight.

With the Great Alpine and Bonang roads already closed, the closure of the Princes Highway would shut off the last remaining major road out of the area.

The bushfires in the vicinity of Ensay and Tambo Crossing have now joined at the southern end, yesterday creating a huge U-shaped blaze, with Ensay in the middle.

Lakes Entrance’s annual fireworks display has not been cancelled, with organisers posting on Facebook they hoped “to see everyone there, safe and happy”.

Authorities are monitoring the situation, and have the capacity to cancel the event if needed.

People who have left east Gippsland and who may have friends and relatives concerned about their wellbeing should register with the Red Cross ‘Register. Find. Reunite.’ service via register.redcross.org.au.

Conditions can change quickly, and emergency services advise anyone remaining in fire-affected areas to use multiple sources to stay informed.