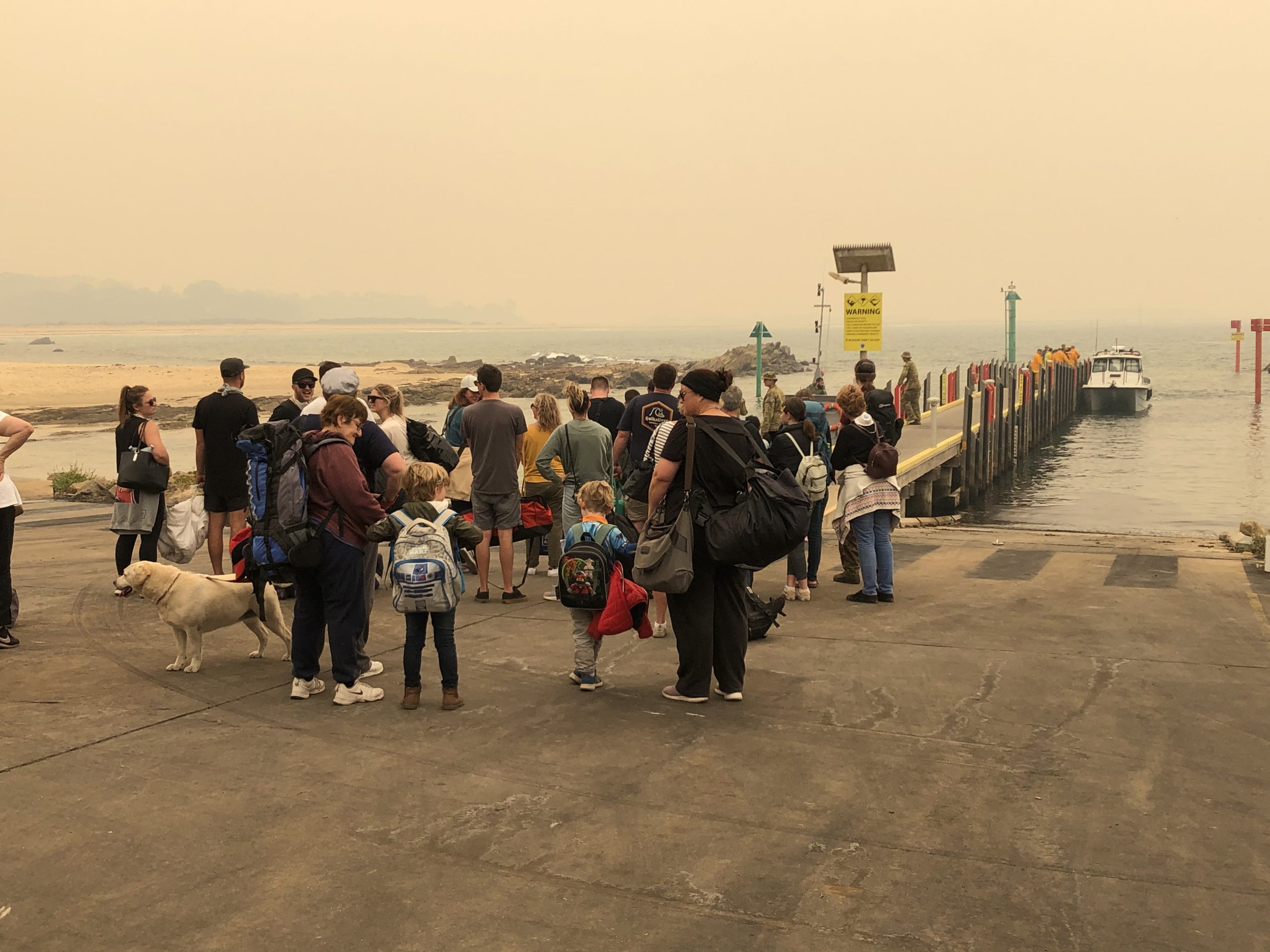 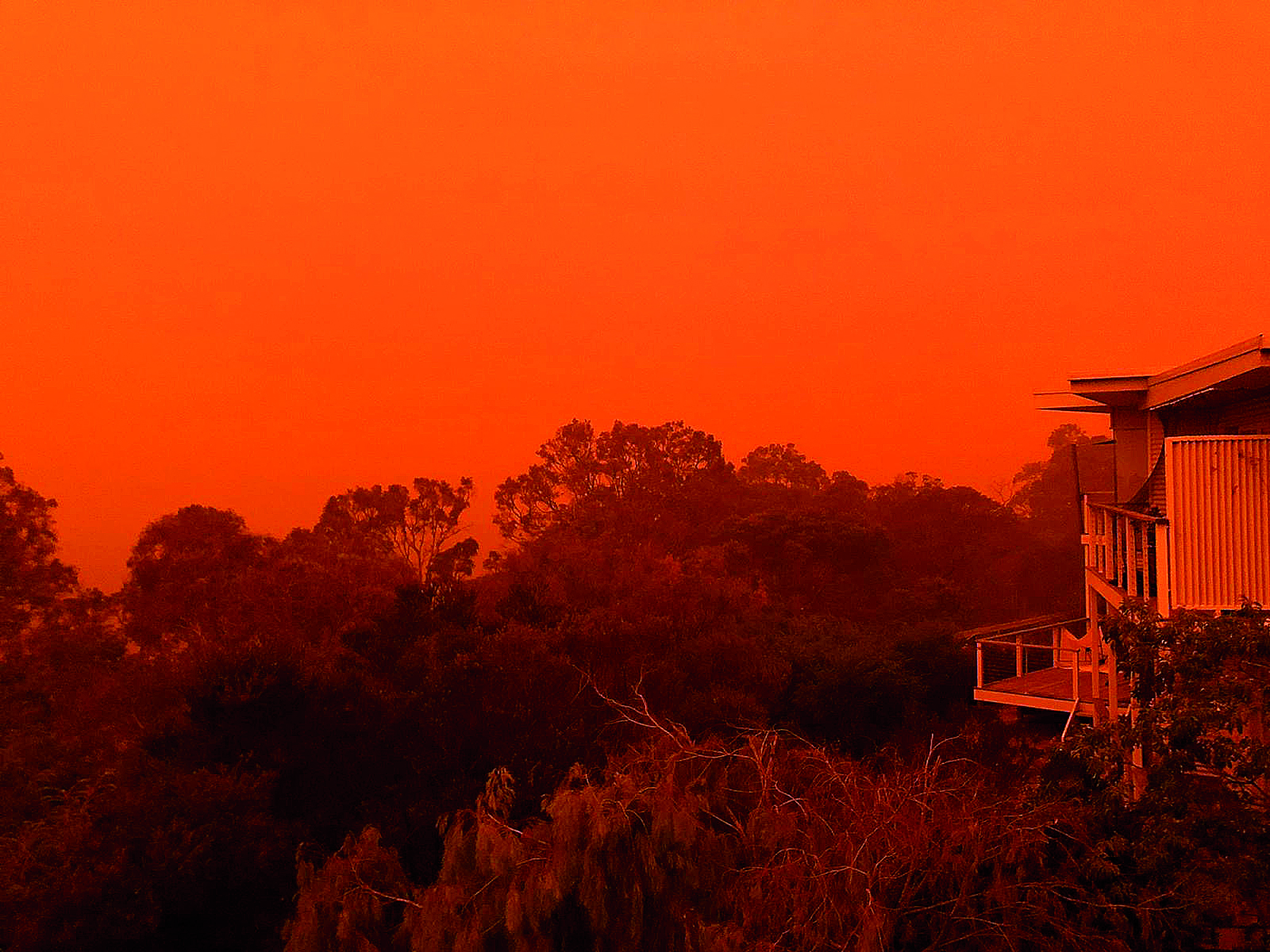 IT wasn’t exactly the relaxing holiday in mind, but the Lowe family, from Sale, certainly took plenty away from their New Year’s Eve stay at Mallacoota.

After buying a holiday house 15 years ago, the Lowes ritualistically pile into the car each Boxing Day, hungry for two weeks of sun, family time and taking in the pristine natural environment the pretty town of 1000 is celebrated for.

A week later, as they stood at the assigned evacuation point, at their assigned time slot, they couldn’t even spot HMAS Choules towering offshore through the thick, orange smoke choking the waterfront.

Caught up in the brunt of the horrendous bushfires ravaging east Gippsland, the Lowes’ beginning to 2020 was one to remember.

After a town meeting, the road in and out of town was closed late morning on December 30.

Robin said by the time he and his family had digested the town meeting’s information, the road was closed, and the Lowes (comprised of Robin, Joan, Lauren and James) quickly became a stay and defend family.

“If the road had stayed open a bit longer, we would’ve said, nope, that’s it, we’re gone, but it closed earlier, so we thought, right, well, fire plan B,” he said.

“If you hadn’t left by then, you weren’t leaving.”

By the evening, the fire had begun to roar, the sky turned blood-red and all that was visible through the smoke was more smoke.

Robin spent his night rising hourly to check the house and the horizon for embers.

By 8am on New Year’s Eve, CFA trucks blared their sirens through every street in Mallacoota, a disconcerting signal for residents and holidaymakers to man battle stations.

The town had been without electricity for just more than 24 hours, and when light drained from the sky at 10am, people were reduced to torches and candles.

As the fire front generated its own weather, a few monstrous wind gusts hurled burnt leaves against the Lowes’ roof, and the family thought it best to enact its fire plan.

While three strike teams worked hard to protect 4000 people huddled on Mallacoota’s foreshore, the Lowes huddled in candle light, attempting board and card games and checking Vic Emergency for updates.

Watching local hearsay pop up on one local social media page opened up a pit in the Lowes’ stomachs.

“But for us, we’re thinking, ‘the school’s gone?

It’s almost in the centre of town!’

“That would have been really bad for us.”

Every half an hour or so, Robin did an ember check, wearing his floppy fishing hat and swimming goggles to hose down surfaces.

“I looked like a goose, but it was effective in keeping the smoke out of my eyes, which was the important thing,” he said.

The freight train roar of the fire is something that will stay with Robin.

“Either that, or it’s like if you were down at the beach on a really wild surf day, when it’s just pounding in,” he recalled.

The Lowes stayed in the garage for three or four hours, but for the last hour, were unsure if it was safe to leave.

“The firies are all absolutely fighting that fire, so they’ve got no time to come along and say, ‘guess what? It’s safe now,'” Robin said.

“By late afternoon, early evening, we called it and said, we’re good to go back into the house.”

“They just kept repeating the same message every 15 minutes, so listening to the radio wasn’t that conducive, because it was the same message that didn’t contain any significant new information,” he said.

“They didn’t really say the threat had now subsided.”

The Lowes’ house, and all those surrounding, pulled through unscathed, as the fire front only got within about 800 to 1000 metres of their court.

“In terms of people who went through that really bad fire experience, compared to them, we were inconvenienced,” Robin said.

“Yes, we were hiding out in our garage thinking about what we needed to do if it got there, but there were no flames flicking across the top of us, only embers.”

Among other horror stories, Robin spoke of a man who had left it too late to leave, and was forced to take cover under Bastion Point Jetty, standing in water as flames licked the top of the wharf.

“That would’ve been brutally scary,” he said.

Robin said the crisis created a community between the holiday makers and the permanent residents, particularly in his own court.

“Our neighbourhood was really quite calm,” he said.

“We all went around and checked on each other in our little group.

“The guy that I’ve been waving to that has lived in my street for the past five years, I finally got to meet him and have a chat with him.

“It was reassuring having a neighbourhood that said ‘yes, we’re all staying, yes we’re good, everyone’s hosing stuff down’.

“Our neighbour diagonally across had a generator, so he set up a charging station – he just left his front door open.

That night, the family bunkered down again, because they weren’t sure how accessible the town was just yet, but on the first day of 2020, the Lowes ventured out and spent their day volunteering together at the town’s op shop.

The family helped find clothes for people who had lost theirs in the fires.

Robin said the town was bursting with people searching for jobs to help out where they could.

“The local supermarket did a terrific job, staying open 24/7 with their generator, so people could come and get batteries and water and toilet paper or whatever it is that they’d run out of – it wasn’t required to do it, it was just what they did,” he said.

With permission, Robin’s wife Joan entered their evacuated neighbours’ houses to empty their fridges and wash their containers, to avoid a health hazard.

Robin ensured his other neighbour’s beloved veggie patch was well-tended to.

“Of course it’s as dry as a chip, but the least I can do is keep the damn thing alive whilst he’s away and whilst he can’t get back in,” he said.

“Even little things like letting my other next door neighbour know that their house was still there, because they had no information.

“They were really grateful when I texted and said everybody in our court is fine – people are all fine, houses are all fine – because that’s the only piece of reliable information they’d had.”

When the evacuation sign-up lists went up in town, Robin said the Lowes’ departure meant there would be fewer people on the ground for emergency services to look after, and more supplies for everybody else.

“There was no benefit in staying, there was no logical reason not to go, that we could think of,” he said.

The Lowes registered to evacuate on January 2, and were on board HMAS Choules, carry on luggage in hand, by 2pm the next day, as part of the largest peace time evacuation in Australia’s history.

Assigned to sleep on the pet deck, they were surrounded by a Noah’s Ark-esque menagerie made up of dogs, cats, a rabbit and a bird.

Joan’s stretcher positioned her to sleep in the cozy nook of a bulldozer blade’s arc.

HMAS Choules is not necessarily designed to transport 1200 people, but Robin commended its crew, who worked around the clock to accommodate the evacuees.

“All the people manning it had been called up on New Year’s Eve – they were all on leave – the boat wasn’t active at the time,” he said.

“They got the boat ready in 24 hours and those people were flown in from left, right and down the centre.”

Robin recalled chatting with a bulldozer operator, who had been holidaying in Brisbane when he received a phone call in the morning.

He was flown into Sydney that afternoon, but the boat had already left, so he was helicoptered on board to catch up with his bulldozer.

The bulldozer, and presumably its operator, are now clearing roads at Mallacoota.

By 6pm on January 4, the bleary-eyed horde was disembarking the Choules in Hastings.

Robin said he worried most about the economic effect of the bushfire, saying while thankfully there was no loss of human life in Mallacoota, there may still be a loss of livelihood and hope.

“A massive amount of the actual tourist infrastructure is burnt,” he said.

“There’s a set of boardwalks that run from town all the way to Karbeethong [Lodge], and half of that has burnt, and at the main Bastion Point beach, the walkway to get to the beach has burnt.

“The abalone co-op – the biggest employer in town – its factory is burnt, which means 45 people that don’t have a job, and won’t have a job until they rebuild the factory.

“The local businesses have to make a real killing over Christmas and January, which tides them over for winter.”

He added other small east Gippsland communities, like Buchan and Genoa, couldn’t afford to lose anything either.

“Rebuilding a community is a lot more difficult than rebuilding a building,” he said.

Robin described his family as now feeling a little lost.

“Everybody’s okay, just at a loose end, because this wasn’t the plan,” he said.

“Whilst you were up there, you could do the volunteering bit, you could tidy up, you could hose down the deck, there was always something you needed to do.

“I woke up this morning [in Sale], and smelt smoke, and just felt tired.

“Any natural disaster you get to talk about afterwards is a win.”

He said people could use the bushfire crisis as an opportunity to learn, and ensure people continued to care for each other.

“There were a lot of people highly, highly stressed, and just making sure they’re okay … if we could maintain the caring, we’d be a much longer way down the track,” he said.

“There’s a genuine cause to rally around – but wouldn’t it be nice if we could actually keep that as our normal, go-to, that’s how we are?”