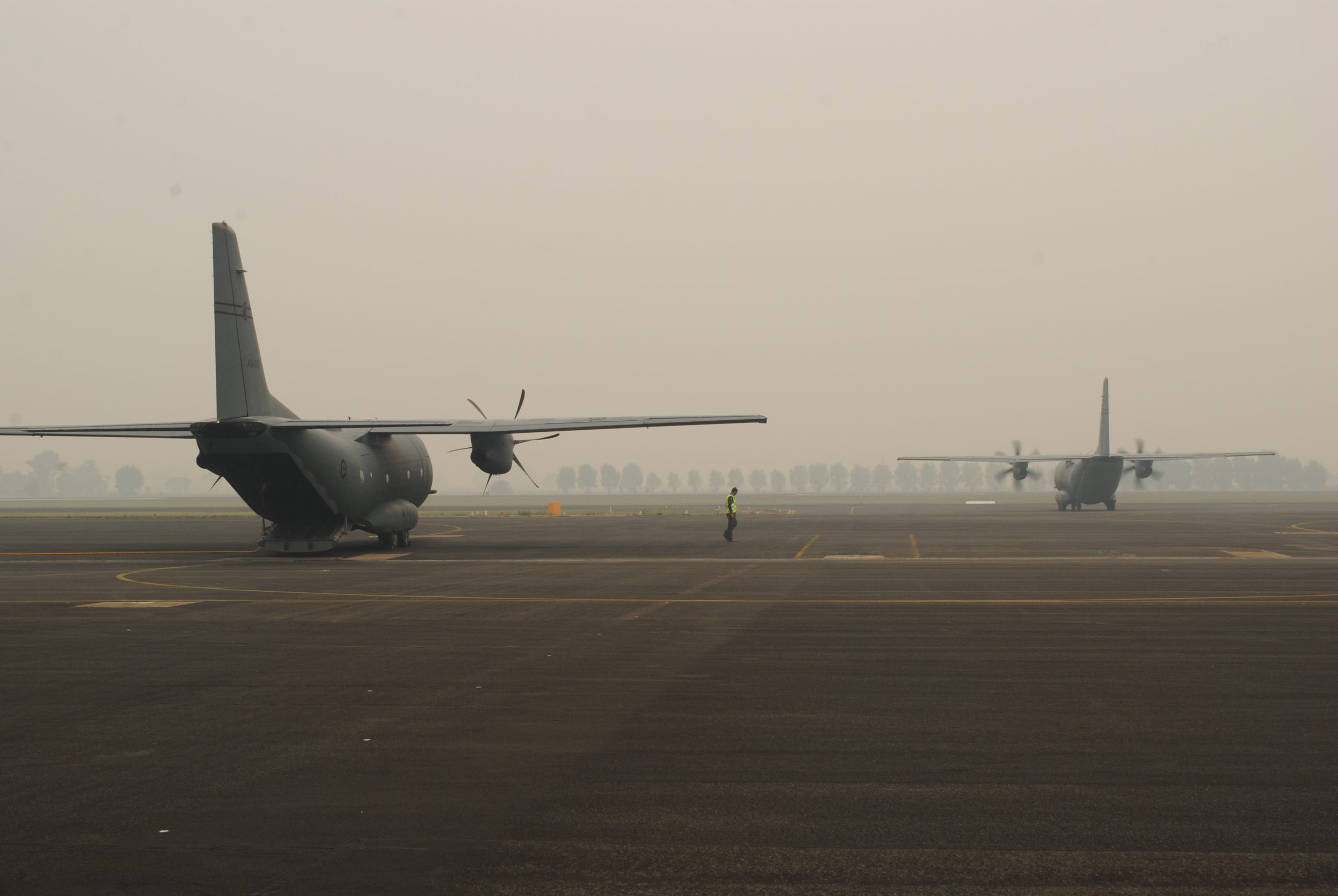 Providing a listening ear and a helping hand for fire evacuees

The job of getting fuel to fire-affected areas

PEOPLE may have noticed a significant increase in traffic around town lately, and not just on the roads.

For the past two or so weeks, RAAF Base, East Sale, has hosted a range of specialised military vehicles and aircraft from interstate and overseas, temporarily transforming it into one of Australia’s largest international bases.

From the moment visitors step foot on base, it becomes astonishingly clear the Australian Defence Force’s Operation Bushfire Assist is in full swing. Camouflaged Army trucks filled with supplies line Heart Avenue, ready to spring into action at a minute’s notice.

A small tent city has been erected near the airfield, housing Army personnel wearing breathing masks.

On the tarmac, exotic helicopters and planes less familiar to Sale’s skies are silhouetted by smoke, while the famous Roulette PC21s are grounded in their sheds.

Three loaded C27J Spartans are poised by the runway, ready to take people and important cargo to Albury, before flying to RAAF Base, Amberley, in Queensland to reload supplies and changeover crews.

A little further down the runway, two Australian and two Singaporean CH-47 Chinook helicopters are waiting to take supplies to remote and isolated communities.

A discreet emergency reception, operated by the Air Force, has been set up to provide medical and mental health support to evacuees.

Defence personnel from Townsville, Darwin, Amberley, Adelaide, and of course East Sale, literally wait for the smoke to clear to get on with the job.

The logistics alone for such an operation are staggering.

The base’s usual operations as an officer training base, putting the next generation of pilots in the cockpit, has been put on hold while the base acts as the central hub for Defence’s response to the southern fire grounds.

Meanwhile, the world watches – East Sale even attracted the attention of a Greek news crew, which toured the base with local media this week.

On Wednesday, flying conditions were abysmal.

“The smoke today means the visibility is less than 500 metres, which is our operating minimum,” he said.

“Throughout the last two weeks, the smoke has been down as low as 100 metres, which has prevented us from being able to conduct the operations.

“Despite wanting to and being ready to go, we’ve been unable to do so because of the weather.”

Wing Commander Allen said the most important cargo the ADF aircraft were flying into isolated communities included medical supplies (which are on board every flight that leaves East Sale), food, water and fuel.

He added it was the ADF’s responsibility to “make sure all of the people in the isolated communities can get as much supply as they can and support during this crisis”.

“To date we’ve lifted nearly 450 tonnes of cargo into this area alone, and we can respond really quickly,” he said.

“This level of support is what the ADF does, as requested by the agencies that do that.”

“The resources have to be shared equally amongst the task forces depending on the operational priority,” he said.

“New South Wales has been fighting this since November last year, and they have been using Richmond as a base, and we also have joint task forces in New South Wales and South Australia.” Victoria’s joint task force – JTF 646, based on Army’s 4th Brigade, with support from across the ADF – has had a busy week, as the operation shifts to a more recovery-based application.

As they have been doing for some time now, ADF helicopters continue to deliver fodder to farmers with starving livestock, transport firefighters to where they are needed and transfer people to safety when weather conditions permit.

ADF teams are on standby in fire-affected areas to help dispose of deceased livestock, at the request of local authorities.

This includes engineering personnel and equipment, and an Army reconnaissance team using Protected Mobility Vehicles to clear between Orbost and Mallacoota.

On Tuesday, the ADF delivered the first drop of 13 bags of mail to Mallacoota, and 12,000 litres of water was delivered to Bairnsdale.

About 100 Papua New Guinea Defence Force personnel, including engineers, underwent orientation and induction into the Joint Task Force structure at Puckapunyal on Wednesday, and the MV Sycamore completed a transfer of personnel from Sydney to HMAS Choules, just off Mallacoota.

More than 3000 full time and about 3000 reserve personnel are now providing support in the field, at sea, in the air, and from Defence bases across fire-affected regions.

ADF personnel have been working with state and territory authorities since September last year in response to Australia’s bushfire crisis, and have committed to continue support for as long as needed.