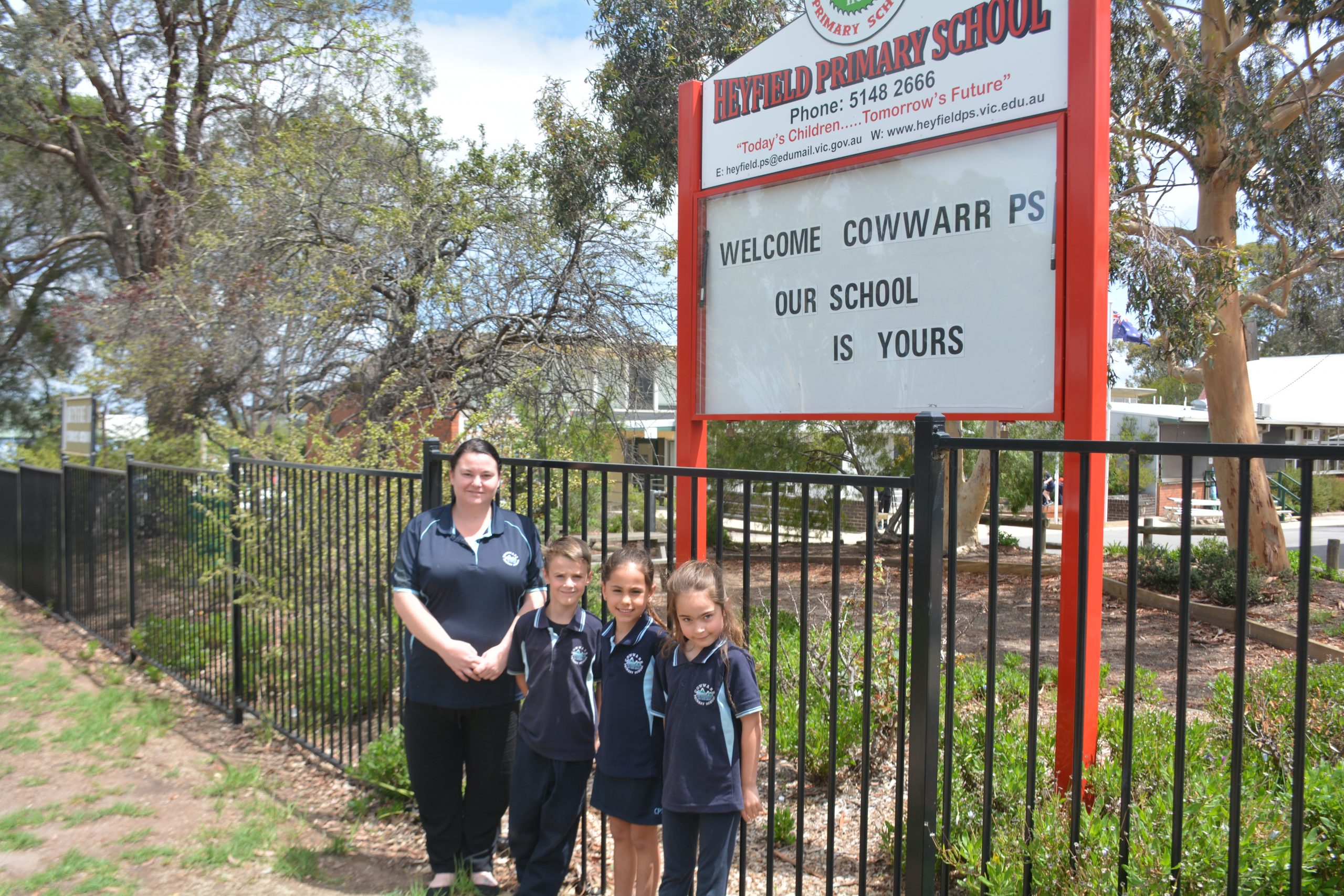 THERE were no Mr G-like histrionics as Cowwarr Primary School students returned to class this week.

All operations, students and staff from the Cowwarr school, which burnt down last week, have been redeployed a short distance north-east to Heyfield Primary School.

Cowwarr is utilising two previously unused rooms at Heyfield to conduct classes, with everything from bag racks to a fish tank in one of the classrooms making it feel as much like a normal primary school as possible.

The two schools are operating independently, as work continues on the site of Cowwarr Primary School to facilitate the quickest possible return.

Cowwarr students entered the grounds of Heyfield for the first time this week, and while there was some trepidation, others enjoyed the novelty and saw it as an opportunity to experience what they called a “second first day”.

Grade five student Samira Norton said students were told they would be relocated to Heyfield last Friday, a day after coming to terms with the fact their school had burnt down.

“It was really devastating when the school burnt down and we weren’t allowed to go there the next day because it was still smouldering,” she said.

Samira said she and other classmates were going through mixed emotions.

“It’s difficult to go here instead of just going across the road, and it’s kind of upsetting and happy at the same time because we know the school’s getting built back up again – but all our memories that we had are still with us,” she said.

Cowwarr students were given a warm welcome by their Heyfield counterparts, with a sign at the front of the school declaring ‘our school is yours’.

Heyfield Primary School principal Velleda Bradford said that with only 20 or so extra students on the site, not a great deal would change in the day-to-day running of the school.

“It has been very uneventful – nothing different to what we usually would do,” she said.

“It has added no pressure to the way we work to our teachers.

“It is absolutely fantastic to see new students and blue uniforms around, and we feel very privileged to have them here and welcome them.”

In order to keep a sense of identity, students have not been integrated and work on a separate lunch timetable, although there is a cross-over during the recess break where both schools are outside at the same time.

Ms Bradford said a lot of hearts went out to Cowwarr.

“On Thursday morning when I woke up to the news that Cowwarr Primary School had burnt I tried to find Albie’s [principal Albie Fitt’s] phone number to give him a ring, to find out how he was and tell him how sorry I was to hear the news, because I cannot imagine how he would have felt,” she said.

“I know that if it was my school it would be absolutely heartbreaking.

“I think most of the Heyfield staff felt heartbroken, so it was very natural to say ‘we have two spare rooms why don’t you use them?’

“On Friday we organised the classrooms so we could make a start Monday – and now here we are.”

Mr Fitt has been inundated with messages and calls of support, and has led a calm and calculated response to ensure the welfare of students is prioritised.

He wished to thank all for their sentiments.

“It’s been all go-go-go just getting everybody organised, but one of the things that’s been amazing is just the response of people,” he said.

“I’ve been answering emails and text messages from all over the state – people texting and emailing to say that they can identify with us and they feel really sad for our school.

“There was one school from the top of Victoria who said they had 22 kids, three preps, started school the first day, had a great day, exactly like we did and said ‘we couldn’t imagine what it would be like to have your school burn down that night’.

“I even had a call from the regional director for the south-eastern Gippsland region – they were on holidays and rang me to ask how we were.

“We’ve had lots of people offering to help.

“Schools in our local cluster are all on board helping.

“Schools around Gippsland have all been fantastic, the Education Department has been working flat-chat for us, and I couldn’t complain about that.”

Mr Fitt said Heyfield was the logical choice to redeploy.

“It was organised through the Department of Education.

“We talked about what was available and what was close, and Heyfield was both of those,” he said.

“We had plenty of schools that were happy to have us, but Heyfield was the most convenient in terms of driving from Cowwarr.”

It is envisaged students will remain in Heyfield for a few more weeks.

“We don’t think this is going to be a long-term solution,” Mr Fitt said.

“We think we will be back in portable classrooms on our site within a reasonably short period of time.

“We’re thinking we need to keep our team together, keep our team routine because it won’t be too long until we go back to being just Cowwarr Primary.

“The site at Cowwarr is being cleared, things are being retrieved, portable classrooms are being put in place and they have to be wired and plumbed in.

“The speed at which the Education Department is working for our welfare and wellbeing is just amazing.”

Cowwarr students and staff spent part of their first day at Heyfield reflecting on the good times they had at their old school.

“We’ve concentrated on remembering some funny things that maybe happened in the building – good memories to talk about to get that out and move on,” Mr Fitt said.

“We’ve had psychologists who have been working with the children both individually and in small groups, and help has also been offered to parents.

“We reiterated that the people are the team, people are what’s important.

“We’ll come back, we’ll be our school again and we’ll be out at Cowwarr.”

Mr Fitt said he was under no illusions as to the enormity of the task ahead.

“Think about building a house and multiply it by 100,” he said.