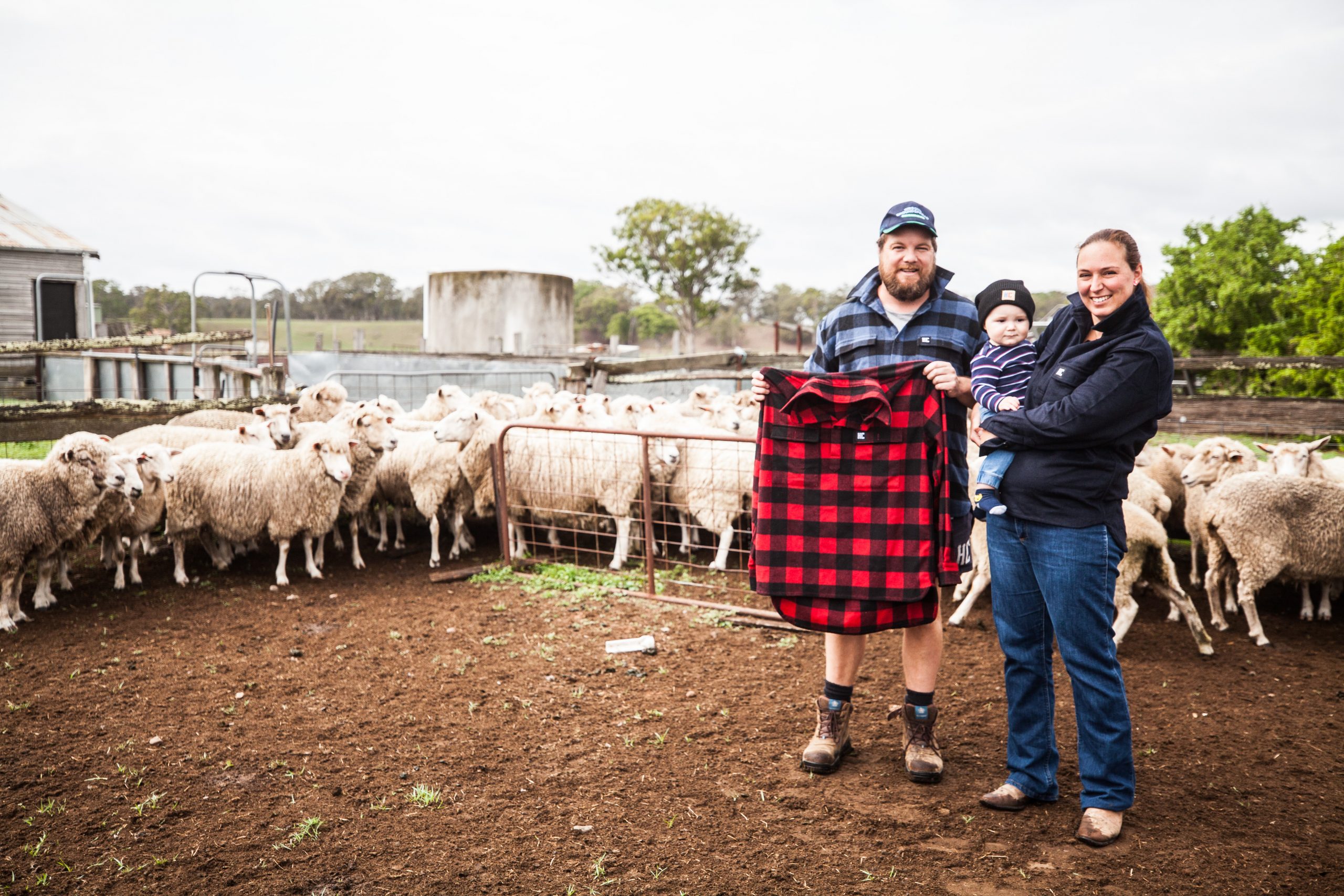 WHILE farmers are notorious for their complete lack of fashion, a Briagolong farming family is proving just how much opposites can attract sometimes, by launching their own clothing label.

Young couple Steve and Alice Noble have gone down the unique path of designing and selling an array of items, with their Hugh Charles label now operational after 18 months in the pipeline.

“Alice came up with it,” Steve said.

“Her father was William Hugh Tanner and my dad is Barry Charles Noble.”

The home clothing business was born after a number of things fell into place, with Steve initially toying with the idea of getting merchandise made for sporting clubs, while Alice took time off from her job as an animal nutritionist and feed sales representative following the birth of their first child Timothy nine months ago.

“We had our young son, and Alice was looking for part time work,” Steve explained.

“It sounds a bit funny because there’s no real link between farming and fashion and it’s a weird thing to get into … but I like making stuff I’d like to wear and there was an opportunity for a business there on the side – so we went for it.”

They pride themselves on the quality of their products, with Steve saying buyers can expect to have something that will still be good in years to come.

“It’s all woollen – the beanies are Merino wool, and the jumpers are a fine wool, very soft,” he said.

“We want to do natural fibres.

“We even use metal buttons, so part of our marketing and what we want to do is to get away from plastic and that sort of thing.

Steve looks after design and Alice handles the logistics, and they hope to expand their range as time passes to include cotton flannels, work shorts and a modern interpretation of the shearers’ singlet.

“We are trying to stay with stuff that won’t really go out of style, so the idea is it’s long-lasting.

“We’re not trying to set the latest trend, but something you’ll wear.”

Early indications have been positive for the Hugh Charles brand, which has sold to every Australian state.

The enterprise has also given the Nobles something to keep their minds occupied as the agricultural sector continues to battle its way through challenges, most notably drought.

“It is good because it is completely different from what I do day-to-day,” Steve said.

“I was farming and also doing fertilising consultancy in east Gippsland where it was really dry, so it was a good distraction and something to be positive about and work on rather than just worry about how it is dry all the time.

“I think there’s a bit of negativity about a few industries slowing down or closing down in this area.

“We’re pretty lucky to live where we are – even with all the hardship – we’re trying to put a positive spin on things.”

In years to come it could well be Hugh Charles flannies that overtake prominent brands in the outdoor fashion stakes.

The Nobles have their sights set on loftier targets, and hope their story may also help others see what is achievable.

“Two years ago I wouldn’t have thought this is where we’ll be going, but if a chubby bearded and the least cool guy and his family from rural Victoria can get a reasonably successful clothing brand going, then that shows you really can do anything around here.”

People wishing to place an order with Hugh Charles can do so online at www.hughcharles.com.au, or find out more via the company’s Facebook and Instagram pages.