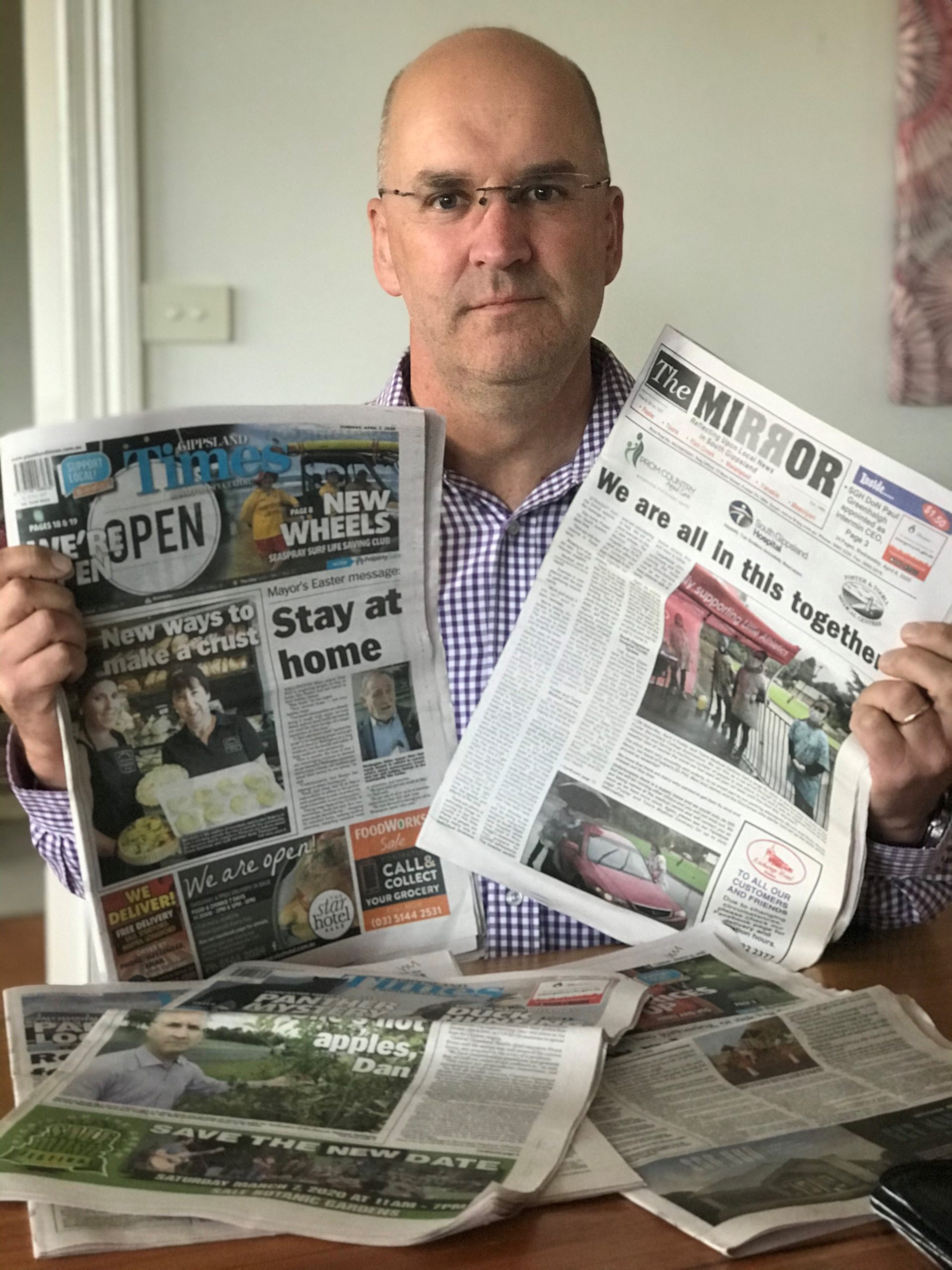 LOCAL media outlets have never been more important and deserve support from state and federal governments, according to a local MP, whose sentiments have been echoed by the Rural Press Club.

The package, announced on Wednesday will assist local newspapers and television and radio broadcasters.

“We need our local media to provide local stories and news in our communities across Gippsland – and that is true more than ever at the moment,” Mr O’Brien said.

“Our local newspapers, radio and TV do a great job telling our stories and ensuring that our community voice is heard locally and around the nation.

“Unfortunately we have seen some local papers close, but I hope that is a temporary state of affairs.

“It would be a very different landscape and a travesty for our local communities if we lost these local voices.

Mr O’Brien, who is a former journalist, said he would continue to support local media as best he could, and encouraged businesses and Gippslanders who were able to, to continue to advertise with local media.

The Rural Press Club has also welcomed relief for Australian media and investment in regional journalism, but said more needed to be done.

Rural Press Club of Victoria president James Wagstaff said regional newspapers were “the heart and soul” of their local communities, providing an important voice that might otherwise not be heard.

“Some of these newspapers have been publishing for a century or more.

“They have survived droughts, floods, the Depression and embraced new technologies with gusto.

“These papers have supported their local community in their times of need, and now it’s time to support them.

“It is good to see the government taking action to help shore up the future of what is a critical industry for regional Australia.”

The Rural Press Club said the work of regional newspapers was fundamental in “highlighting the particular challenges of life in regional and rural Victoria”.

“Without a strong local media, regional Victoria will get lost in what is increasingly a city state as there will be no one to speak for the people.”

Gippsland Times manager and Country Press Australia president, Bruce Ellen, welcomed the announcement of the funding, much of which had already been allocated as part of the June 2017 Regional and Small Publishers Fund, but held in limbo until now.

“However, Country Press Australia and the 140 independent news media titles it represents, will wait until the funding guidelines are formulated, before assessing what impact this will have in helping to sustain public interest journalism by regional and small publishers in the current crisis,” he said.

“We are very concerned that the original intent of the Regional and Small Publishers Fund when it was first established, may be lost and/or significantly diminished.

“Country Press Australia will be strongly urging the federal government to maintain key elements of the original criteria, at least for the funding portion of this announcement that relates to the originally allocated Regional and Small Publishers Fund.

“Regional news is essential and provides locals with important information and stories, particularly during emergency situations,” he said.

“Gippslanders need to know what is happening throughout Gippsland and issues that could be affecting them.

“While our national media continue to provide us with national stories and the impact on coronavirus, it is extremely important that Gippslanders are kept informed at a local level.”

Mr O’Brien said it was “critically important” that the stories in our own communities were told to help ensure the fabric in our local area remained strong.

“While traditional media has been under pressure in recent times, as a former journalist and now an MP, I am aghast at what I sometimes see circulating on social media.

“While on the one hand it’s great that people have access to diverse sources of information, I encourage Gippslanders to get their news from reputable sources.

“The amount of conspiracy theory rubbish that I have been sent recently, particularly about coronavirus, is very concerning and highlights the need for credible, stable news sources to be available.”