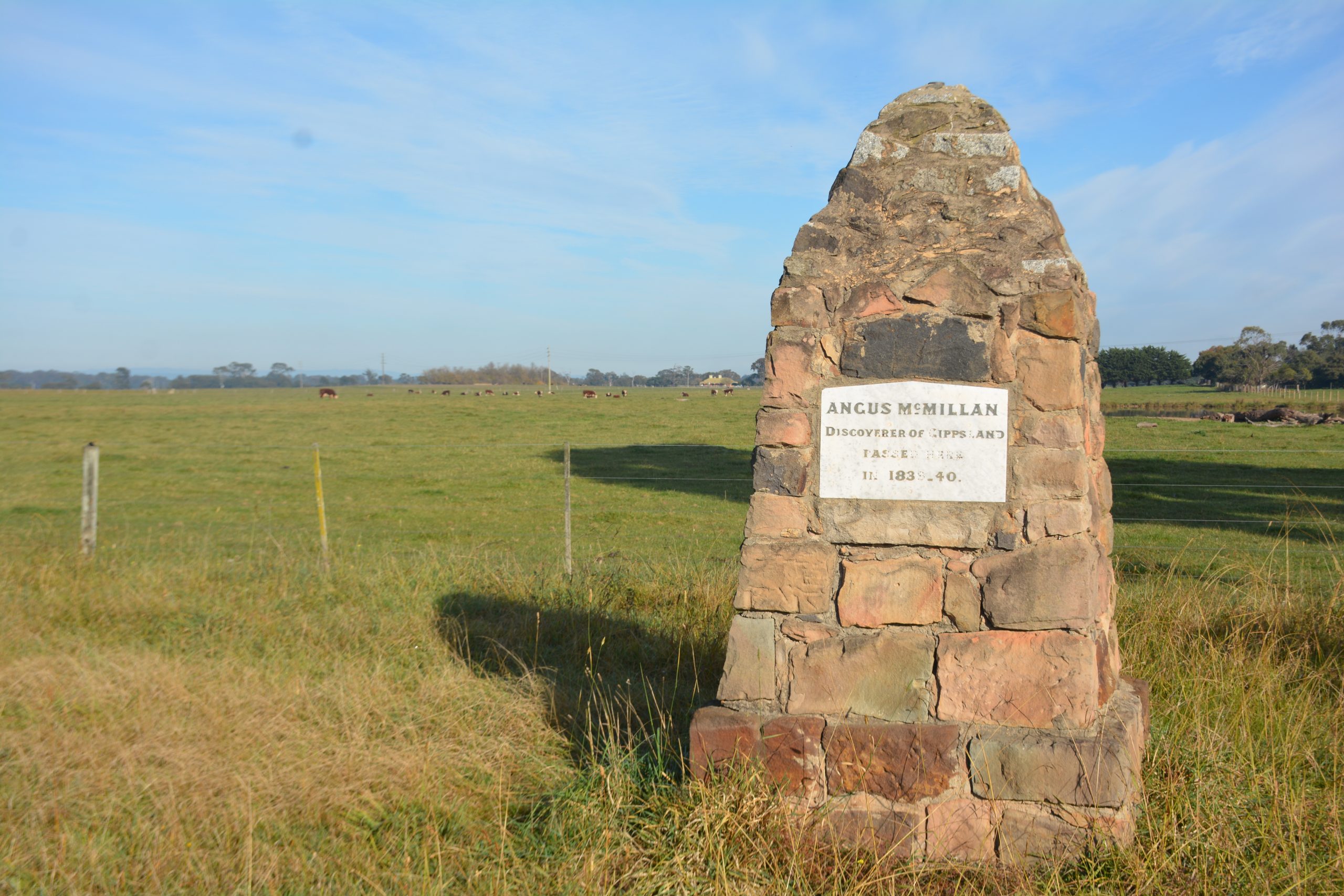 MEMORIAL markers honouring Angus McMillan will remain after a motion to remove them was defeated.

Following a passionate discussion, five of the nine Wellington Shire councillors on Tuesday voted against the motion to begin the process of removing the markers on council-managed land, on the corner of Foster and York Sts, Sale, and Blackburn and McMillan Sts, Stratford.

The motion also would have had council seeking approval from the state government and other managers to discuss with Gunaikurnai Land and Waters Aboriginal Corporation (GLaWAC) and the broader community regarding markers on land not managed by council.

These markers are on the corner of Macfarlane and Davis Sts, Heyfield; Yarram Memorial Park; the roundabout at the intersection of Tarraville and Yarram-Port Albert Rd, Port Albert; on Maffra-Sale Rd, opposite from Bundalaguah Primary School; Lyons St gardens, Rosedale, and Toms Cap Rd, Willung South.

If the motion had passed, council would also have consulted with the community, in partnership with GLaWAC, to devise the best way of recognising the history shared by indigenous and non-indigenous people, and reviewed the appropriateness of public reserves being named after McMillan.

News of the motion sparked debate on social media before and after the meeting, and prompted numerous submissions to council.

Since the meeting agenda featuring the motion was published on Friday, council received an extraordinary 239 letters, emails and comment forms.

A total 55 per cent of those supported removing the markers, 23 per cent supported retaining them but with some acknowledgement of history, 17 per cent were against anything being done, while five per cent sought more information.

Discussion of the motion during the meeting took almost an hour and 50 minutes.

Angus McMillan was a pastoralist who explored what is now east and south Gippsland on behalf of Captain Lachlan Macalister, naming the Nicholson, Mitchell, Avon and Macalister rivers.

McMillan was the first state Member of Parliament for Gippsland South from 1859 to 1860.

However, many historians say McMillan was a key figure in the killing of local indigenous people.

Of the 11 people who spoke to council about the motion on Tuesday night, only two were opposed.

GLaWAC culture general manager Gratton Mullett said removing the markers would be a “great symbolic step towards reconciliation” between indigenous and non-indigenous people.

“Our people were dispossessed from our traditional land, forcibly removed and massacred at the hands of the early colonisers,” he said.

“The McMillan cairns represent a celebration of history of a man who arrived in Gunaikurnai country and committed forms of genocide.

“We understand he did some good things for the new colony that we now know as Gippsland.

“The symbolism of these cairns to us is significant, in the form of their recognition of the early pioneers, but it is also an issue that has clearly been on our community’s agenda for many decades.

“We are happy to discuss the best way forward with the Wellington Shire Council about these cairns, and to ensure a more respectful, appropriate recognition of Gunaikurnai culture and history, including European history occurring.”

Speaking against the motion, Helen Arnup said history could not be erased or changed.

Ms Arnup said the markers should remain, but to recognise the modern perspective with another memorial next to it or a plaque.

“You cannot learn from history if it’s wiped out,” she said.

“To remove a memorial because the person being honoured had been involved in things now considered wrong is not the right way to go about it.

“Erasing Angus McMillan from our memory will not assist our current indigenous people in any way, shape or form, other than to remove one memorial.

“They need health care, they need education, they need assistance with domestic violence, alcohol and drugs.

“Removing Angus McMillan’s memorial is not going to do anything about those things.”

“If we can be kind, if we can remove people’s distress, then why wouldn’t we remove what is the cause of that distress?”

Pauline Hitchins from the Wellington Shire Heritage Network said while the story told by the cairns was a biased representation, destroying them was not a valid resolution.

“Just as the cairns probably over-glorified his achievements, so today’s critics try to lay all the blame for conflict and the decimation of indigenous people at his feet,” she said.

“In fact, if the research is studied, there is little proof of his deeds, although it is fair to say that he, like many other early settlers, dealt with many issues in what today is an unacceptable manner.

“Even Peter Gardner’s book Our Murdering Founding Father, titled as such to increase book sales, frequently notes that there is no evidence for the suggested claims of McMillan’s deeds, but that it is probable or possible.

“It is important that the opinions of the broader population are considered, but it would seem logical that the cairns be amended to recognise that the expedition which the route from Monaro through Gippsland to the port was guided by indigenous peoples and that there were numerous other participants.”

Cr Crossley said the motion was a chance for council to show leadership.

“There are very few times in our lives that we can make a significant difference, and this is one of them,” she said.

“This is a moment to show leadership – this moment is about reconciliation.

“We don’t need to debate about whether Angus McMillan was a good guy or a seriously flawed individual in the early 1840s, who led the Highland Brigade, linked to some of the worst massacres in Australia.

“There is no depute; it was the facts that convinced the Australian Electoral Commission to remove his name from the electorate in south Gippsland and rename it Monash in 2018.

“This is not a debate about history.

“The facts have been established – McMillan was both an explorer and a murderer.”

The markers, Cr Crossley said, were not historically accurate and “did not spring from a groundswell of popular local pride”.

“They were a series of 18 propaganda devices conceived by a self-appointed history memorial committee in Melbourne,” she said.

“They were installed to have a platform for the Governor, Lord Somers, to lecture the populous on Imperial loyalty, some 60 years after McMillan’s death.

“The symbolism of these cairns is not lost of the local Gunaikurnai, nor on any other Aboriginal person.

“This is why we it is so important that we start to demolish these oppressive symbols.”

Cr McCubbin said pulling down the markers would not change what happened.

“There’s only one thing that matters, and that’s what the local indigenous people want – they’re the victims.

Cr Scott Rossetti recognised European settlement came at a cost to the local indigenous community, and both sides of the region’s history needed to be told.

“Working with the existing cairns is a way of telling the complete story, and that future work can be done to tell the full story of the impacts of those times,” he said.

“We can and should learn from our history by telling and retelling the true story of our cultural heritage – the good, the bad and the ugly.

“The cairns should be retained as they are part of our collective story.”

The amount of time councillors had to collect information was a factor behind Crs Bye and Ripper opposing the motion.

Cr Ripper said the COVID-19 pandemic had prevented people, particularly the elderly, from attending the meeting or submitting a letter.

“We need more dialogue before we get to this stage,” she said.

“It is the wrong time for this.”

Mayor Alan Hall responded by asking “how much more consultation do we need?”.

He pointed to the “overwhelming support” to make a change.

“That’s 78 per cent of respondents who’ve said one way or another, enough is enough,” he said.

“When he was elected to parliament, and afterwards, McMillan worked on behalf of the Gippsland Aboriginals,” he said.

“During the last 10 years of his life, McMillan distributed food and blankets to the Kurnai, he was a local guardian of them, he was on the committee to select a site of a mission station in the Sale-Maffra area.

“In parliament, he was on the Select Committee for the Protection of Aboriginals, that was prior to 1860.

“To me, there’s two sides – one side where the historians dispute the facts that McMillan was involved in the bloodshed, yet we’ve got the other story where the last eight to 10 years of his life he worked very hard to protect the Aboriginal people.”

17/06/2021
TELSTRA has acknowledged a planned outage which knocked out phone services in Sale in Tuesday was not the best timing, given local people were...