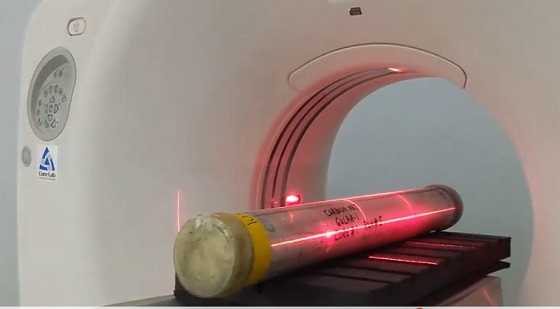 CARBONNET, the state and federal government-funded project to find ways to capture and safely store carbon dioxide from fossil fuel industries, has indicated a better than expected potential for sub-sea storage of captured carbon dioxide.

Rock core from CarbonNet’s recently-completed offshore appraisal well off Golden Beach is being analysed, with early data indicating that the proposed under-sea floor reservoir’s quality is better than previously predicted.

Segments of core from the Pelican well site are being analysed by a computed tomography scanner in Perth.

The scanner uses x-rays to build up a three-dimensional image inside the core sample to assess the properties of the rock ahead of more testing, using the same techniques as a medical CT scanner.

Scanning shows up fractures, sedimentary bedding and lithology changes. Rock core analyses from the Pelican site are expected to be complete in early 2021.

CarbonNet’s search for a sustainable storage for captured carbon has been made more of an imperative as a result of the one-year coal gasification project, led by Kawasaki Heavy Industries, currently underway at a plant adjacent to the Loy Yang Power Station.

It will use 160 tonnes of brown coal from Loy Yang’s mine to create three tonnes of hydrogen, which will be shipped to Japan from a loading terminal at the Port of Hastings on a specially-designed ship.

Hydrogen can be produced from brown coal by gasification, and is being promoted as a non-polluting fuel for heavy transport and energy- intensive industries.

Coal gasification works by reacting coal with oxygen under high pressures and temperatures to form synthesis gas, a mixture consisting primarily of carbon monoxide and hydrogen.

The capture of the carbon monoxide would help reduce the greenhouse emissions of the gasification project and any future large scale development of the coal gasification technology.

The Australian Department of Industry, Science, Energy and Resources is currently developing its input into an internationally-recognised hydrogen certification scheme, which would allow countries

to set their own definitions of “green” or “low-emissions” hydrogen, with reference to agreed international standards.

CarbonNet has also pointed to an increase in international efforts to develop carbon capture and storage technology, with the Global CCS Institute bringing the total number of CCS facilities in various stages of development to 59.

Worldwide there are now 21 facilities in operation, three under construction, and 35 in various stages of development.

Government support and incentives in the United States and the United Kingdom are underwriting many of the projects under development.

Researchers from Monash University and the CS IRO have set a record for carbon dioxide capture and storage using technology that resembles a sponge filled with tiny magnets.

Using a metal organic frameworks nanocomposite which can be regenerated with remarkable speed and low energy cost, researchers have developed sponge-like technology that can capture carbon dioxide from a number of sources, even directly from air.

The magnetic sponge is used to remove carbon dioxide using the same techniques as induction cooktops, using one-third of the energy of any other reported method.

MOFs are a class of compounds consisting of metal ions which form a crystalline material with the largest surface area of any material known.

MOFs are so porous they can fit the entire surface of a football field in a teaspoon.

Associate Professor Hill said global concerns about the rising level of greenhouse gas emissions and the associated environmental impact had led to renewed calls for emissions reduction and the development of green and renewable alternative energy sources.

“However, existing commercial carbon capture technologies use amines like monoethanolamine, which is highly corrosive, energy intensive and captures a limited amount of carbon from the atmosphere,” he said.

“Our research shows the lowest reported regeneration energy calculated for any solid porous adsorbent, including monoethanolamine, piperazine and other amines.

This makes it a cheap method that can be paired with renewable solar energy to capture excess carbon dioxide from the atmosphere.

“Essentially, we can capture CO2 from anywhere.

“Our current focus is for capture directly from the air in what are known as negative emissions technologies.”